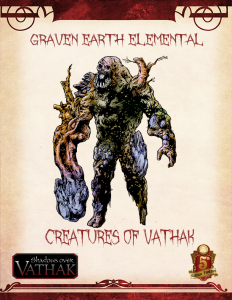 Okay, so the graven earth elemental clocks in at challenge 9 and has a massive hit point pool, as well as the Earth Glide and Siege Monster features that you’d expect from such a colossus. In fact, this fellow gave me a distinct Resident Evil: Nemesis vibe; a hulking brute who can spawn the undead, with slightly more ponderous ranged attacks…yeah, thematically, this works.

It does have damage resistances, and a vulnerability – and no, not going to spoil the latter. These hulks execute two slams per round via Multiattack, but, alas, the attack value is set at +8, which is incorrect: The attack value for the elemental should be +9 (+4 proficiency bonus, +5 Strength modifier); the critter also has a ranged Bone Throw, which, ideally, would have featured in the Multiattack feature, but the absence here might have been intentional. Bone Throw also suffers from the incorrect attack value. Weird: Those slain by the elemental’s Slams have a chance to rise as undead; the Bone Throw also has a necrotic bonus damage (which explains this ability), but the necrotic damage in Bone Throw is erroneously noted as 2d5; pretty sure that should be 2d4.

Editing and formatting are good on a formal level. On a rules language level, the math is mostly correct, but does show signs of the critter being a bit rushed, with the d5 typo and atk value off by one. (The latter may also be due to challenge being increased in development, without properly implementing the change’s ramifications.) Layout adheres to a two-column full-color standard, and the critter-artwork by Rick Hershey is really cool and this one? It really looks like the critter! The pdf has no bookmarks, but needs none at this length.

Ismael Alvarez’ Graven Earth Elemental would score a solid 5 stars, were it not for its hiccups; this thing is frightening, and will have the party run/retreat, and makes for a great hunter/stalker-style boss that needs to be whittled down. The massive hit point pool and resistances will make it one of those things where the players go “Why won’t it die???” I like that. This is a good horror critter. Now, I can’t rate it as high as I’d like to due to its hiccups, but for the low price? Personally, I think this is worth checking out and unleashing on your players. My final verdict will hence round up from 3.5 stars. Worth getting!

If you found this review to be helpful, consider leaving a tip via paypal, or joining my patreon.