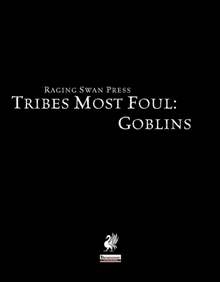 We kick off the reboot of the TRIBES-series with an interesting observation – the pdf is shorter and the tribe featured less specific in its niche than before: We are introduced to the Goblins of Black Fur tribe in one fluffy page, including a  summary of the tribe’s demographics before we get fluffy descriptions of the tribe’s notable personalities as well as full stats for a barghest rogue (thug)/fighter and a fighter (mobile fighter) 5 among them and a short lore-section.

After that, we are introduced to the Cloven Skull-tribe, again with a fluffy introduction that sets the tribe distinctly apart from the Black Furs – the Cloven Skulls remove part of the brains of their victims, making them a macabre and truly creepy form of livestock. Of course, target-demographics are also contained herein and, once again, we get fluffy descriptions of the notable personalities of the tribe and two stats – this time a goblin (weapon master) fighter 5 and a rogue (poisoner) 3/ fighter (archer) 1 – pity we don’t get the menhir savant/wild stalker as well, though – from the fluff, the character seems to be very interesting.

The Goblins of the gouged Eyes would then be the final tribe featured in this pdf – these goblins are slightly tainted by the abyss and while they are fecund, they have a high infant mortality rate due to the unstable powers of the abyss, thus making them value infant life very much. Once again, we get tribal demographics, notable persona and  two statblocks of goblin heroes – this time a fiendish druid (cave druid) 7 as well as a  fiendish goblin ranger (skirmisher) 5 – once again, including tribal lore..

Editing and formatting are top-notch, as I’ve come to expect from Raging Swan Press. Layout adheres to RSP’s two-column b/w-standard and the pdf comes fully bookmarked in two versions, one intended for screen-use and one intended to be printed out.

I really like the reboot of the TRIBES-line – while I do miss the individual tactics and level of detail of the old pdfs, these now come with 3 tribes, which should be much easier to integrate into a campaign. And after reading it, I would have settled for a solid 4-star-rating – but the Cloven Skulls are just…well. Unique. Disturbing. Cool. The other two tribes, at least to me, somewhat pale before them and I hope to see more unique cultural practices included in future installments – it is such tidbits that elevate stats from being numbers to having a proper identity. Now don’t get me wrong the others are neat as well, the copious use of archetypes making the goblins versatile and with 100% Crunch: Goblins, you can get enough statblocks to supplement the rank and file soldiers of the tribes. This pdf definitely is worth the low asking price and makes for a well-conceived reboot of a series that will hopefully see a lot of future installments. Still, I feel that one not too weird tribe would have sufficed – a third tribe with some peculiarity beyond a slight fiendish taint (especially culturally – come on, eye-gouging must have some cool tradition attached!) Hence, my final verdict will clock in at 4.5 stars, rounded down to 4 for the purpose of this platform.

You can get this nifty supplement here on OBS and here on d20pfsrd.com’s shop!