The Long Night of Winter: The Raid (PFRPG/OSR)

The Long Night of Winter: The Raid (PFRPG/OSR) 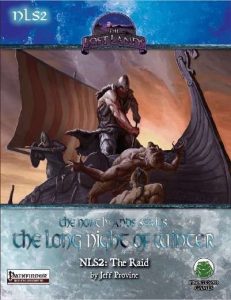 This module is intended for levels 6- 8 and is set in the eponymous Northlands of Frog God Games’ Lost Lands campaign setting. It does translate well to other fantasy campaign settings, though.

Going on raids is a crucial part of the viking lifestyle and now, the skald Ake the Lost has returned to the North, last survivor of the proud fleet of Ulf Greymane. The PCs witness the skald’s tale, which is a massive almost-1-page exposition-dump, at the local Thing-assembly. As a minor issue here: The skald’s trauma makes him kinda come off as not particularly dignified -which is intentional, yes. Still, I couldn’t help but feel that the presentation of the story could have been handled more dynamically. Anyway, Ulf’s fleet has been vanquished – the Southrons he tried to raid, the Santherans, in their warm, turquoise waters, have seemingly struck an alliance with a kraken!

The PCs are hired by a cowardly, but prosperous landowner, one Fretr Bondason, to accompany him on his Vindurbrottingr to the shores of these folks as part of a retributive fleet. The epic-length journey to these faraway shores is completely glossed over – so, if you’re like me and don’t simply skip ahead over months of travel, keep those wilderness supplements ready, for the module does not cover the journey at all – which does take away the epic achievement On the plus-side, like the previous “The Long Night of Winter”-module, this is steeped in the lore and culture – though it here mostly pertains the presentation for the GM and how the PCs perceive the world.

As Santhera’s secluded bay slowly comes into the sights of the PCs, they’ll witness something epic – namely their fleet being attacked by berserking kraken. Yes, plural. They will fight mere tentacles of the epic beasts as their own foes (which is fine by me – in fact, it’s how I handle really big critters in my home game as well) -what I’m not that happy with, though, would be that the PCs don’t get a chance to pilot the vessel to safety or other meaningful decisions – the combat here could be so epic and amazing and it may play out as such, but the module per se does not make a lot of use of its glorious set-up, at least rules-wise.

Provided the PCs don’t get annihilated, they’ll make landfall, a few lone survivors, stranded on the shores of a hostile nation – and immediately find themselves struggling to reach a Santheran guard post – the few soldiers there may be easy to deal with, but more forces are approaching – glorious death seems inevitable…until the PCs find a secret tunnel, which leads under the bay, past chthonic traps, into the sunken ruins of the culture that is responsible for the shape of the Santheran island: Under a crystal glass dome, horribly mutated spellcasters are using an ancient artifact below the seas to cloud the mighty minds of the kraken in mating frenzies. And yes, these dread casters sport rules-relevant, twisted mutations, making them fit perfectly with the obvious Sword & Sorcery tropes evoked – in fact, during the combat with these masterminds, the lighthouse ruins below the sea may be torn from the sea, raised up by air pressure and the like, providing a sufficiently epic finale with the threat of death seeming certain.

Speaking of death. Guess who is not amused by being manipulated? Bingo. Turns out that clouding the minds of some of the most deadly beings to come from the monster manual can backfire horribly…if the PCs do their job, they thus won’t have to worry about Santherans ever again…

Jeff Provine’s “The Raid” breathes the spirit of classic Sword & Sorcery – it feels like a classic Conan the Barbarian comic: Overwhelming odds, tentacled monsters, ancient, sunken ruins, degenerate magicians – this has all the ingredients that make me smile. At the same time, it does feel very minimalist and suffers from the 16-page page-count more than “Winter’s Teeth” – from the glossed-over journey to the landing, there are aspects which feel hurried: I’d have expected some exploration/interrogation/Stealth action on Santheran soil to lead the PCs to the hideout of the mages. As written, it can feel a bit linear and like author’s contrivance. Similarly, the epic doom of the fleet demands more detail, as far as I’m concerned. Granted, a capable GM can easily insert these in the module, but I still found myself thinking that this module tries to cram a bit too much into its pages. I also think that this…doesn’t really feel like a viking raid, that the Northlands theme could be more pronounced…but all of that should be considered to be minor complaints. If you’re looking for a great, if a bit linear sword and sorcery module, then this delivers in spades. My final verdict will clock in at 4.5 stars, rounded down for the purpose of this platform.

While my review is based on the PFRPG-version, you can also find an OSR (S&W, to be precise) version here!
Endzeitgeist out.