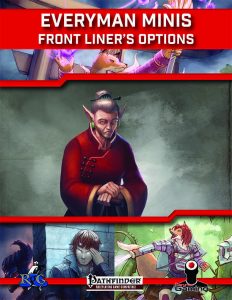 On the introductory page, we are introduced to a couple of new quinggong powers, noting class features for which they may be exchanged, as well as tight presentation by level. 5 such ki powers are included here with restrictions, if any, and ki cost noted duly.

The pdf contains a total of 5 different new feats: Hunker Down requires heavy armor proficiency and allows you to spend a move action to gain an insight bonus equal to ½ armor check penalty to CMD to resist bull rush, drag, etc., which is retained until you move. Nice. Line Breaker builds on reposition, and allows you to switch places with a repositioned foe. This surprisingly manages to get the complex AoO-scenario here right. Neato! The final three feats are a new Style-feat chain, with the base feat Spiny Urchin Style building on Two-Weapon Defense, enhancing that option. Cool: Does come with double weapon and light weapon training synergy. Spiny Urchin Sting builds on this: When an adjacent enemy attacks you and misses, you may AoO the target as an immediate action- Spiny Urchin Bristle builds on this retributive attack lets you strike back with BOTH hands! And yes, this gets the rules-operation right. Nice one!

There are two archetypes within: The divine protector paladin replaces smite evil with righteous shield, which makes shields actually matter: As a swift action, you may add + Charisma modifier to your shield bonus and add the holy weapon property. The damage does scale in a unique way, and the ability lasts for 1 minute and may be used 3 + Charisma modifier times per day. 1st level, as you could glean from this, nets Improved Shield Bash as a bonus feat, replacing detect evil. Additionally, Charisma may be used as a substitute for TWFing prerequisites. 3rd level unlocks guardian’s auras: As a swift action, they may cause 1d6 damage to all within 10 ft. that attacked allies. 14th level lets the paladin spend lay on hands uses to channel in the brief radius…or in full radius, if more uses are spent. This modifies aura of courage and resolve, eliminating the immunities, and replaces aura of faith. At 5th level, we get avenging shield, providing Far Shot as a bonus feat. Why? The archetype can throw the shield as a non-improvised thrown weapon, and if imbued, it also returns! This btw. manages to clarify that it does indeed allow for full attacks – kudos! This replaces divine bond. Finally, 11th level’s aura of vengeance is replaced with the option to create basically a magical fortification that enhances AC and Ref-saves. And yes, it moves with you. I LOVE this archetype. It’s hands down one of the coolest paladin archetypes I’ve seen in a while!!

The second archetype would be the advance guard ranger, who modifies favored enemy, gaining +1 to AC and saves (bonuses properly codified!) versus the favored enemies; similarly, the animal companion gained applies the bonuses instead of the atk and damage bonuses, making for a defensively-minded character. 3rd level nets armor training, reducing armor check penalty by 1 (minimum 0) and increasing maximum Dexterity bonus values, with every 5 levels thereafter improving this further. Additionally, medium armor no longer hampers movement speed and 7th level allows for full movement in heavy armor. This replaces favored terrain. 12th level replaces camouflage with Heavy Armor Proficiency, or a substitute combat feat. Evasion and improved evasion may now be used in heavy armor! Hide in plain sight, finally, is replaced by DR 5/- versus favored enemies while wearing medium or heavy armor. Nice one! The archetype is complemented by a new ranger combat style – these are often tougher to design than they look, and the Protector style and the feat choices here make for a cool defensive ranger.

Editing and formatting re top-notch. I noticed no glitches on a formal or rules-language level. Layout adheres to Everyman Gaming’s artwork-bordered two-column full-color standard and the artwork featured is nice. The pdf has no bookmarks, but needs none at this length.

Matt Morris had a tough task here: Pathfinder is notoriously offense-heavy, and making viable and, more importantly, FUN defensive options, is a tough task indeed. Well, this humble pdf succeeds with flying colors. While I like the defensive ranger well enough, the paladin archetype is AMAZING. It oozes style, is powerful without being broken, and it will make your enemies really fear your shield, while your allies will celebrate your protective aegis! This archetype is pure gold and rocks really hard. The feats and other components also all have something going for them, making this pretty much an all killer, no filler pdf. My final verdict will clock in at 5 stars + seal of approval. If you’re looking for some fun paladin and ranger tricks, look now further!!