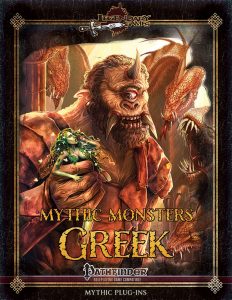 Now, as always, the installment begins with a kind of customized bonus content, which, this time around, would be a collection of 4 new magic items, one of which is an artifact. Two of the items are directly associated with the fabled Hydra of legend: Teeth of the hydra grow phalanx soldiers upon being sown. Mythic users can expend mythic power when sowing these teeth to enforce cooperation, and more potent mythic beings can also spend even more mythic power to add the invincible mythic template. Solid one! Dread fangs of the hydra are an upgraded version of the standard teeth, growing skeletal champions that will attack those incapable of channeling negative energy. Mythic power can be used to bring them to heel, though, and those with both access to mythic power and channel negative energy, can enhance them with the invisible simple template. Nice one. Kudos: Schools associated have been modified for the improved version.

The yoke of the brazen bull may be placed on an animal once in 7 days, causing it to burst into flames that do not harm the animal. After a round, the target animal transforms into a fire-variant gorgon, which may be upgraded with the savage template via mythic power expenditure. The gorgon is hostile, but may be brought to heel via Handle Animal, and the control of the bull is tightly and concisely codified with precise rules-language. Really interesting would be that movement between user and bull/gorgon-thing is tied as though mounted, sans the benefits. Still, this makes movement potentially really interesting. Additionally, the user may manifest a plow behind the bull. Throwing the teeth of a sufficiently potent beast in the plowed earth creates a small troop-like skirmish that attacks everything in the area. Once the skirmish ends, the soldiers will remain at the user’s command. Really cool, complex thing. The artifact I noted would be the golden fleece, which sheds light and may catch light, returning it as daylight. If the fleece is placed on a target, the creature gains the benefits of heal and greater restoration. Curses and the like are also broken, and when placed over a corpse, it may even use resurrection if the creature hasn’t been dead for too long. The character can also expend mythic power to enhance its effect to the mythic iterations, and the fleece can also glow. A creature can only benefit thrice from the fleece, and every use comes with a chance of it dissolving and reappearing somewhere else. Nice take on the classic item.

At the lowest challenge array, the mythic faun clocks in at CR 2/MR 1. The mythic upgrade receives basic bardic spellcasting, something that the base creature really should have had, and the ability to make short-lived sleep arrows – so no, you can’t stockpile these folks to break economies. Kudos! The arrows they create can force two rolls to save, taking the worse result. Nice. At CR 4/MR 2, the dryad’s mythic iteration can animate the bonded tree to move, leaving a path of churned earth. Minor complaint here: The ability requires defaulting to the Su’s standard activation action, as it does not note one. The mythic dryad is aware of all fire within a mile (cool angle!) and her entangle (not italicized) blocks sight for Large (not capitalized properly) creatures and smaller ones. The dryad may also expend mythic power to greatly increase the save DC to escape. (Once more, skills and attributes have not been capitalized properly…weird.) I like this one, but the formatting hiccups are odd. At one CR more, the mythic harpy can use Bluff (once more, oddly not capitalized) to explain away her captivating song. Oddly the ability notes that it’s an opposed Bluff check, which Bluff is pretty much already; the verbiage may be misunderstood here. Cool: The harpy also gets the means to emit a mythic-power-fueled scream that spoils drinks nearby – including potions! Cool!

At CR 6/MR 2, the mythic Cyclops may 1/day use a variant of moment of prescience or vision, the latter focusing on mythic ranks, ascensions and the like. These guys get Master Craftsman instead of a mythic feat and may use 2 mythic power to temporarily gain Craft Magic Arms and Armor. Their insight can also 1/day exactly set the outcome of a roll, which may also have a fixed surge die result added. Mythic power can be used to make use of this more often, though this is subject to immediate action limitations. The mythic Cyclops also gets uncanny dodge or its improved brother ability, and they are immune to precision damage. Really cool upgrade of the base critter. Clocking it at one CR and MR higher, the mythic cerberi get a cool, unique defensive stance, may smell souls (tracking undead, even incorporeal ones) and all-around vision. The critter can also spend mythic power to further upgrade his sight. The three heads can also allow for triple saves on some effects. Really cool: The critter gets a super-potent 3-headed flaying jaw attack that can really generate some nasty bleeding wounds. This is based on the barbazu’s infernal wounds, though, annoyingly, some references to the original abilities are still here. The build, per se, is cool, though. The mythic version of the Stand Still feat has been reprinted for your convenience here.

The mythic iteration of the chimera clocks in at CR 9/MR 4, and when managing to hit a target with two heads, it renders the target flat-footed versus the chimera – ouch! Speaking of which: In such a case, the critter can expend mythic power as a swift action for a really painful extra damage that may stagger the foe. The mythic chimera also gets a potent defensive hide I really enjoyed, and yes, the breath weapon is upgraded with Devastating Breath (mythic feat reprinted for your convenience) and also has a more potent breath with additional physical damage mixed in. Nice one! At one CR more, we also get a mythic version of the stymphalides, whose wings “grind and shriek” – I assume this to make Stealth impossible. The mythic version also is particularly adept at using wings to attack, and may use them as a shield of sorts, deflecting arrows, and via mythic power, even negate targeted ranged spells requiring an attack roll. Big plus: The iconic rain of razor-shark feathers has been reproduced in a cool manner, creating caltrop’d terrain and taking shields etc. into account. Big plus!

Also at CR 10/MR 4, the gorgon’s mythic iteration is immune versus charm and fear effects, ignores hardness with trample, and they may use mythic power when hit to attempt a sunder maneuver versus the weapons striking them. Solid upgrade. Now, the pdf also includes quite a few sea-themed monsters: At CR 6/MR 3, the siren’s mythic iteration gets the ability to charm any who lay eyes on them (spell reference not italicized), and the siren may spend mythic power to extend the effects of the obsession effect of her songs. The CR 8/MR 3 oceanid have their water telekinesis slightly upgraded and may use it particularly effectively versus ships, capsizing them and dealing a ton of damage; additionally, they can use their summon nature’s ally V quicker, even as a swift action via mythic power. Oceanids can also help or hamper aquatic vessels with mythic power. Neato! The CR 17/MR 6 mythic Charybdis comes as a giant version, with Inescapable Grasp reprinted. With a great 1-page artwork, the critter gets a deadly drowning stomach and may upgrade its SPs to the mythic iterations. Speaking of which: More SPs and the ability to destroy spells and magics helping survival in the seas is cool. The monstrosity also benefits from a very powerful, defensive tidal wave. That obscures vision etc. While we’re on the topic of these legends: The CR 20/MR 8 mythic Scylla gets the same 3/day spontaneous mythic spell upgrade…oh, and she can drain mythic power with critical hits and even recharge her limited use feats. Supreme grappling and devastating tossing of targets is cool. She can also wolf down targets on critical hits for a particularly devastating hit. Her loathing for spellcasters is brutal and hampers concentration greatly – oh, and she may use mythic power to make single attacks versus casters daring to cast, potentially in addition to AoOs. This lady is super-deadly and rather fun – big upgrade from the comparably bland default critter.

The new creature featured within this pdf would be the Stheno Medusa, who clocks in at CR 13/MR 5, a Large and deadly being, whose blood from bleed or blood drain or critical hits can spawn venomous snake swarms or giant scorpions. Her scales automatically damage weapons of a hardness below 20, and her claws similarly ignore any hardness below that value and have an increased threat range. The arrows fired are all poisonous and she is immune to death effects, energy drain, exhaustion, etc. Cool: The head of the stheno may be used when she’s slain, but this comes as a risk for the wielder…This medusa also gets the option to make her face seem pleasing…or nauseating. And, obvious, poison, petrifying gaze and coil-grappling allows for a couple of cool tricks. Neat monster.

Editing is generally top-notch on both formal and rules-language levels, though formatting is, in a couple of critters, significantly weaker than usual for Legendary Games. Layout adheres to a 2-column full-color standard and the pdf sports a couple of nice full-color artworks. The pdf comes fully bookmarked for your convenience.

Jason Nelson, Jonathan H. Keith, Mike Welham and Jim Groves are all veterans, and it shows: The mythic upgrades herein are evocative, cool and truly neat. The new critter is strong as well, and yeah, I like this. That being said, this is formally slightly less refined than usual for the series. While I still very much enjoy this pdf, as a reviewer, I do have to slightly penalize the pdf for its minor glitches. As such, my final verdict will clock in at 4.5 stars, though this still remains better than most monster books out there, which is why I’ll round up.

You can get these cool monsters here on OBS!