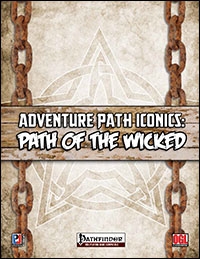 This collection of Pregens is 27 pages long, 1 page front cover, 1 page SRD, leaving us with 25 pages of content, so let’s take a look, shall we?

This collection of pregens for Fire Mountain Games acclaimed “Way of the Wicked”-AP kick off with some general information on how the characters were built. Following the suggestions of the AP, the pregens are built with 25-point builds and lack starting equipment -since they are prisoners. They also make use of the crime-traits that serve as a fitting introduction to the AP. Much like in the installment for Jade Regent, this installment of Adventure Path Iconics features extensive backgrounds for each of the characters as well as beautiful, original artworks for every character. Also, much like the first installment, half the characters are human, whereas the rest make use of the races from the NeoExodus campaign setting.

So what characters do we get? The pdf’s first character is one of my favorites – Anxelia Luris, a daughter of a noble blessed with beauty and good standing always considered her looks problematic. Disgusted with the superficiality and hypocrisy of her circles and family, her disfiguring scars and fascination for body modifications as well as her devotion make her an uncommon inquisitor – and at least in my opinion, the scars featured in her portrait rather serve to enance her allure – but then again, I’m drawn to bad girls. 😉 She comes with extensive descriptions of her looks and everything else as well as advice on how to advance her during the next levels. The final page of her entry, the character has her image grayed in the background.

Arok Headtaker is the first NeoExodus-race – a Kalisan, a white-skinned cannibal raised in an orphanage that turned out to be a slave-ring, Arok is equal parts beast and civilized creature. If you’re not familiar with Kalisans – have I mentioned that they can consume the brains of the fallen to gain their memories, at least temporarily? The magus rocks and is a well-fitting addition to Talingarde.

Cormas Blackwood, the antipaladin, is essentially anti-Jon Snow: A disgruntled bastard son who in the end tried to murder his inferior half-brother. Impeccable manners and arrogance hide a truly vile man, disappointed by society and hell-bent, quite literally, on taking what he perceives as his rightful place.

Ghostwhisper, a mindbender alchemist of the Cavian race is one of the weirdest characters: A Cavian (ratman) severed from the race’s psionic hivemind. Without any sense of tact and a desperate bid for rejoining the hivemind, this sociopathic creature is perhaps the most uncommon of the characters – but his traumatic separation almost makes him a sympathetic character – I would have loved a more evil vibe à la mad scientist there. By the way: The non-psionic version of the Cavian-race is used – I would have enjoyed a Psionics Unleashed-compatible version, but oh well.

Glimemrshade, a sasori (scorpion-people) rogue aspiring to become an assassin makes for a weird, chatty killer that actually really enjoys her profession and brings the joy of killing, painfully, to the table. While also weird, her foreignness is imho better explained than Ghostwhisper’s.

Now if you instead would prefer a thoroughly devoted devotee to Asmodeus’ glory, take Kalina Rhys – sexual, seductive and already ingrained into Asmodeus’ worship, the beautiful cleric is calculating and might actually be interested in those that don’t fall for her constant innuendos.

Rajas the Defiler, a P’tan (shadow-infused cat people) equipped with a deep-seated hatred for Mitrans, is another character, much like Ghostwhisperer, one might consider sympathetic – but only for a short time. The barbarian takes his nickname seriously as all hell, an acquired name being every significant to his people and thus seeks to defile and destroy anything related to Mitra.

Perhaps the most tragic of the villains herein would be the sorceror Zachris Swayne – he lost his family to cheating bastards and had to spend a life on the streets – until his latent sorcerous powers awakened and allowed him a chance to exact revenge. His revenge was cruel and his lack of manners contrasts sharply with his high charisma score. In his mind, Zachris is a victim, bent on making foes pay and escape his perceived role as a victim of circumstances and the world in general.

Editing and formatting are very good, I didn’t notice any significant glitches – here a shout-out to Joshua Yearsley – ever since he has started editing for LPJr Design, the glitches have been SIGNIFICANTLY reduced, eliminating the one weakness I usually had to complain about. Layout adheres to a rusty-chain-bordered, slightly tarnished-looking, glorious two-column standard that once again shows why I consider LPJr Design’s varying layouts to rank among the best out there. Also among the best are the GLORIOUS full color mug-shots that each character gets – and characters they are: Even if you don’t use them as pregens, they’d make  for great cohorts or even a rival adventuring party. The pdf comes in two versions, with one being more printer-friendly. The pdfs come fully bookmarked with nested bookmarks for your convenience.

Impressive. Author Jeff Lee delivers a cadre of despicable villains to introduce to Way of the Wicked or simply use as low level foes of PCs of other campaigns – with the glorious artworks and neat background information, the characters truly deserve their names. Now, not all is perfect: I would have enjoyed an alternate version of the Cavian and personally, I don’t think that the P’tan and Cavian blend culturally too well with Talingarde: The Sasori and Kalisan work much better, proving that it’s possible to make these work well within the nation of Talingarde. As these are minor complaints, I’ll still settle for a final verdict of 4.5 stars, rounded up to 5 for the purpose of this platform. Well done!

You can get these neat iconics here on OBS!