EZG reviews One Night Stands: Curse of the Shadowhold

One Night Stands: Curse of the Shadowhold 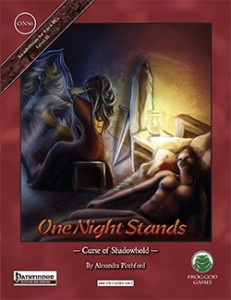 This pdf is 24 pages long, 1 page front cover, 1 page editorial, 1 page ToC,1 page SRD, 4 pages of advertisement, leaving us with only 16 pages of content – not much, but let’s see whether the module holds up!

This being a review of an adventure, the following contains SPOILERS. Potential players may wish to jump to the conclusion.

The module begins when the PCs, in the border-town Nerimar, manage to save an elven  ranger named Sarim Oakleaf from some thugs – he has journeyed to Nerimar to request aid for a particularly insular elven enclave located in a notoriously shadowy, dark forest.

Following Sarim there (or following via an alternate hook), the PCs will have to brave deadly shadow wolves and negotiate finally with some sentries to gain access to the enclave of Golden Oak and there, the elder tells them about a group of rangers that has gone missing. As the PCs embark on the quest, they  will have to explore the ruins of an once-proud elven kingdom.

Inside these ruins (which seal the PCs inside), the PCs will have to defeat deadly shadow demons and similar beasts and brave the insane survivor of the missing elven party – and finally, in the last room of the short dungeon, find the culprit for the palpable shadowy veil of the forest – a dread Nightwing that has plunged its corrupting claws into the elven nation, forcing them to offer sacrifices to it on a regular scale. There is a mirror that can be used to get an edge in the combat versus the dread beast, but it requires 1 whole minute to free (which makes no sense) and thus is essentially completely useless in the battle. A lost chance there.

Upon the PC’s return, depending on who of the elves survived, there’ll be a bloody riot as the dread secret of the enclave is revealed – whether by blade or negotiation, the era of oppression and forced sacrifices is over.

Editing and formatting are very good, I didn’t notice any significant glitches. Layout adheres to FGG’s 2-column b/w-standard and the b/w-artworks are awesome. The maps are nice, though only the dungeon is depicted and we get no player-friendly maps, which costs the module some favor. The pdf is fully bookmarked and hyperlinked, but hyperlinked in the bad way – e.g. every instance of the word “veil”, without rhyme or reason is linked towards the spell veil – that’s just sloppy.

This module is problematic for me to review – on the one hand, author Alexandra Pitchford has created a nice module, but on the other hand, it suffers from its brevity – neither settlement is compelling in its respective depiction, the forest remains abstract and could have used some unique properties/flora/fauna and the final dungeon is atmospheric and creepy, but also too short and ultimately imho does not live up to its own potential.

The angle in the final battle and the scene upon return could have used some unique features/benefitted from having the “trick” actually work and overall, this module feels somewhat unpolished and cut-down to me, robbing it of much of the potential it could have had. Combine that with a trite background story that is essentially rubbed into the faces of the PCs and we get a module that has potential and actually a great dungeon, but also many minor issues and things the DM would need to fix. And then there’s the length – with a net count of only 14 pages, this module should have been the BOMB in order to justify its bang-for-buck-ratio – which it simply isn’t. Due to the low page count, cut-down feeling and not particularly well developed background situation that led to the status-quo in the elven settlement (HOW do they appease? Why? No one ever asked???), I’ll settle for a final verdict of 2.5 stars, rounded down to 2 for the purpose of this platform.

You can get this module here on OBS and here on d20pfsrd.com’s shop for the Pathfinder ruleset.

As most Frog god Games-supplements, you can also get this one in an old-school version for the S&W-ruleset here on OBS and here on d20pfsrd.com’s shop.