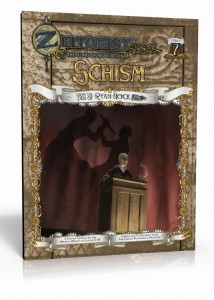 The 7th installment of the groundbreaking Zeitgeist AP clocks in at 95 pages, 1 page front cover, 1 page editorial, 1 page ToC, 1 page SRD, 1 page back cover, for a massive 90 pages – so can this module stand up to the ridiculous high quality of its predecessors?

In order to find that out, this review will need to delve deep into SPOILER-territory – potential players should definitely jump to the conclusion.

Still here? All right! The defense mechanisms and structure of the conspiracy the PCs face is nigh impenetrable – but thankfully, the stalwart constables of the RHC may finally have a chance to go deep undercover – the call for help in the last module needs to be followed up. Alexander Grappa, himself responsible for the creation of the mind of the titanic golem featured in module #5, is trapped in the mind of an obscurati thankfully unaware of his presence – in order to gain a proper man on the inside, the PCs will need to catch the conspirator and make sure that the blind passenger soul can take control of the body it now shares.

But the PCs don’t know that yet – instead, the module begins with the PCs reaching a conclave of the obscurati, braving the security and being welcomed by the mastermind Nicodemus – how they got to this place, well, that will be explained (and played!) after this rather exciting teaser of the things to come! (And yes, from body-switching to complications and alternate ways into the module, this one has quite a bit of potential trouble-shooting available for your perusal…)

Now the way to this exciting scenery is NOT linear either – managing fey (and possibly engaging in a battle of wits with them – the sub-chapter’s header is epic rap battle of history…) and tracking down aforementioned possessed individual turns out to be a rather complex endeavor – with smart use of magic at the hands of both PCs and adversaries being expected at this point. If the Pcs don’t run afoul of the opposition trying to stop them, they’ll sooner or later have to plan their assault on Leon’s train in the lavishly mapped Mirsk plain station -including maps of the train’s cabins, by the way.

Now the issue is, if the PCs manage to defeat their opposition and secure Leon alive, they won’t be closer to having their exclusive ticket to the Ob’s grand event – to achieve that, it’s a trip to the frozen peaks concealing the spires of Knütpara, right into the domain of the dread frost giants. Infiltrating this place, wherein the dread frost giant lich may offer a way to switch souls…for a price, namely freedom from his icy prison. The switch completed, PCs will realize that facing off against an organization like the OB has its benefits – the lich’s brittle body collapses upon being released – so far for his plans for world domination, which fail rather pitifully.

The switch complete (including the PC’s bodies), the PCs now have a perfect inside man and may begin the infiltration of the Obscurati’s conclave – and realize that a friend of theirs is possessed by the very top man of the conspiracy! And from there on, this module becomes an espionage fans wet dream – the PCs are in deep, at the very heart of the hostile conspiracy, faced with the council of ghosts, prison planes, planar switches, smart uses of the iconic magical lanterns…and more intrigue than they’ll ever want. Then, the bodies start dropping. An important monk/paladin called Vitus Sigismund has been captured…and the conflicting ideologies within the conspiracy wrestle for control.

Now if you’re a DM, this might seem horribly complicated – it isn’t. In fact, the PC’s host bodies have their own hand-outs ready, with rules-information for gestalting-special abilities. Better yet, the diverse factions in the obscurati also have their ideologies summed up in handy handouts. And believe you me, the summit will become rather nasty even without the attempts at assassination – whether or not the PCs blow their cover, the mastermind of the obscurati will have a chance to interact with the PCs and sooner or later, there will be a vote…and there will be blood, as the advocates of a potentially tyrannical philosophy are culled from the ranks in a surprising display of brutality.

If the PCs survive the chaos, exploding duplicants, deceptions upon deceptions and the ensuing evacuation, including a furious, chaotic finale, the future of the very world and its cosmology will be set on a path – a path that was at least co-determined by the PCs…and honestly, they may even consider the arguments of the obscurati valid…

Editing and formatting are top-notch, I noticed no significant glitches. Layout adheres to EN Publishing’s beautiful 2-column full-color standard and the artworks provided are nice. The full color cartography is glorious and the pdf is layered, allowing for customization to make the pdf printer-friendly. The pdf also comes fully bookmarked for your convenience.

Ryan Nock’s Schism is yet another installment in this epic that deserves nothing but the utmost praise – from subdued humor to brilliant adversaries and truly iconic locations – and a sense of gravitas one rarely, if ever, sees in any given module, much less one in the middle of an ongoing campaign. The Zeitgeist AP is a thinking man’s campaign, ridiculously detailed and smart, focused on cinematic, smart roleplaying and a distinct focus on brains over brawn. That being said, much like in previous installments, there is ample action to be found herein – and yes, my summary above was at the very best sketchy – there is infinitely more going on in the module, with ample choices for the PCs to make. One would assume that the AP would run out of steam, but quite the contrary seems to be the case – instead of slowly grinding to a halt from the continuous climaxes, the modules instead just switch gears to change to a different highlight – even the calm and serene moments, much like in great movies or books, can carry a ridiculous amount of gravitas, of potential. Schism is one extremely unique module, one that makes full use of Zeitgeist’s diverse, unique concepts, brilliant seeds and copious, unique NPCs – this is a module where masks fall and intentions are revealed, a brilliant masterpiece that can stand among the best in this glorious series…and yes, that means something! My final verdict will thus, unsurprisingly, clock in at 5 stars + seal of approval for the longest unbroken string of such high recommendations any product line ever has achieved. If the masterminds don’t botch big time, the Zeitgeist AP may indeed become THE roleplaying monument of this generation.

You can get this superb module here on OBS!

Prefer D&D 4th edition? That version can be found here!