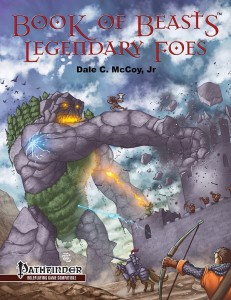 High-level monsters are a whole different breed  -in any setting where chimeras, manticores etc. roam the lands, these beasts of legend lose some of their oomph and thus, stories are woven around other beings, about creatures that can stand toe to toe with dragons. It is said high level foes that are movers and shakers, that shape a  game, that can be the very goal of whole campaigns. It is said monsters that can, by their very existence and passing, change demographics  and be the target of quests – the fascination with the Tarrasque, demon lords, archdevils etc. stems from this instinctual dread, from the sense of epic proportions – and from a DM’s desire to play creatures that may kill characters and yet have the players cheer, as their beloved characters perished in combat with such a legend. I love high-level critters and this book is chock-full with them – but can they stand up to  this lofty ideal?

Well, the first creature herein, at CR 20 is definitely no laughing matter – the 4-tusked demammoth behemoth is the granddaddy of all elephants/mammoths and beyond its impressive crushing powers and physical prowess, its very footsteps shake the earth. And worse, much like a dragon, it can emit a devastating attack with a cooldown: Once every 1d4 rounds, potential adversaries are in for 29d6 points of sonic damage in a 400 ft. line and may be deafened. Even those close to said attack may btw. share this fate. OUCH! Less impressive, but also dreaded would be the Blighrat – an aberration that not only regenerates quickly, but also has an aura that makes you susceptible to disease. As an ultimate nightmare for dwarves, these CR 15 menaces also come with two diseases – claws carrying a nameless nauseating disease, while bites carry a disease that makes your hair fall out in clumps – oh the shame for our poor dwarven brethren…

The flying, fanged and red-eyed CR 16 Blood Lions may have dire-animal-like bonespurs, but are so much more: Not undead, these apex predators can cure themselves via the ingestion of blood and make for deadly opponents. Deific Guards, the dwarven undead guardians of the pharaohs of old at CR 21 will drive the respect and fear into your PCs again – and if you’re like me and tend to expand APs, then this should be remembered as soon as Paizo’s Mummy’s Mask AP hits shelves.

On the more mundane side, CR 17 doombats, huge animals, get an ultrasonic scream and pincer-legged, scaled dragon stirges  are nightmares indeed, with their nauseating breath weapon and sundering pincers. At Cr 19, Fallen Angels could have been lazier in their approach, but instead come with a gamut of interesting abilities. Frozen Reapers may only be halfling-sized and subject to the player’s ridicule, but 10d6 cold damage for every touch and the option to draw forth ice chunks from their body makes for a lethal foe. Why? well, said chunks deal 32d6 damage as well as potentially 2d4+1 rounds of stun. Yeah. Not laughing anymore, are they?

Vermiurges, Shadows of the Void and Gibbering Orbs (renamed Globs) make a return as old friends from the Epic Level Handbook. Speaking of old acquaintances – while I love the creature, I don’t get why the Starak from the rather recent Book of Beasts for the Shadow Plane was reprinted in here . It feels a bit redundant.

Nature itself is not forgotten, though: Whether in the guise of the dwarf-hating, axe-vulnerable Great Caretaker that guards the primordial forests or the massive Guardian of the Mountain that gives elder earth elementals a run for their money. Speaking of element-themed outsiders: Lava Worms could have just been maxed out Thoqquas, but instead get a massive array of unique abilities that include increased chances of stealing and absorbing magic items even beyond the expected fire-themed abilities – and players HATE beasts that take their toys, so yeah – neat! Water Serpents and Wind Sentinels complete the deadly elemental-themed threats. The earth-themed Voidstone, though, deserves special mention, ranking among my favorites in this creature class with its blending of acid and life-drain.

If you’re rather an aficionado of creepy crawlies, the walleye might suit your tastes – while not particularly impressive regarding their physical or damage-dealing capabilities, the creature gets a massive array of intel – one greater scrying per eye. As a spymaster, these creatures sitting in the midst of their webs are awesome indeed, if perhaps a bit high on the CR-scale for what they can do. Megabola spiders are another caliber – vermin, yes, but ones that will see any comparable brethren from their type pale and hide and millenial tigermoths and worms also make for nice creatures in the category megafauna.

Fans of the living dead are not left out either: Take the Jack-in-Irons, spawned from powerful beings executed via being drawn and quartered or the incorporeal memory of rage, spawned from years of torture – nice creatures indeed. There also is another failed lich-experiment resulting in a deadly swarm of death-dealing bone-debris. Neat.

The Darkblood Titan, bringing darkness where it threads – a cool creature, though at its size, an aura would probably be more suitable than at-will deeper darkness. Tall colossal creatures, after all, are usually assumed to be about 64 ft. or more – i.e. deeper darkness with its radius of 60 ft. already has a tough time concealing the titan. And yes, he can cast it as often as he likes, but still – an aura with a range of 120 ft. would have imho worked better.

On the slimy side, we get the CR 22 Ooze Dragons as well as godlings – and these toothy blobs are awesome: Primal gobs of slime, these intelligent creatures enslave humanoids to dance in blind reverence around them and worship them as they speak in all languages as once – disturbing and oozing sword & sorcery flair  -two thumbs up!

Speaking of deadly chthonic creatures, two qlippoths can also be found in these pages, as can a swarm of will-o’-wisps.

Oh and then there’s a rather interesting nod towards one of the most beloved discontinued settings. Does “Rupert” mean something to you? I know some of you out there are grinning from ear to ear right now. CR 25. Space-flight. Saber-toothed. GERBILSAURUS. Yes, not a hamster, but close! And having had gerbils, I can attest to the devastating power of even miniature one’s aura of cuteness – does it surprise then, that this apex predator’s aura takes immense force of will to resist? Also: crit-range 15-20 plus cursed bite and we get a creature that, like its artwork, manages to look both cute and threatening. Awesome. Of yeah, there’s also a sabertoothed moose, but nothing can beat a sabertoothed space-faring giant gerbil destroyer of civilizations.

After that, we get a massive array of different NPCs for the highest echelons of powers: Banshee witches, shadow demon fighters and have i mentioned the awakened fortune-blessed unseelie dire tiger rogue otherwise known as Cat Sidhe? Or an oread worm-that-walks cleric? The 11 NPCs rock hard – but as NPCs, I would have loved backgrounds/legends for them – even at the cost of further increasing the page-count.

That’s not the apex, CR-wise, of what to expect, though – there are 3 demigods in here: Pazuzu, the Green Knight and Libet, Deity of the Inner Self – all coming with various statblocks for followers, signature abilities and CRs nibbling at the 30 – in case your level 20 Mythic characters need their butts handed to them… Said minions btw. span the breadth of CRs, from low to high.

After that, we get 5 appendices: One containing universal monster rules (handy), one containing templates used, one for creature types and one containing one feat that allows you to wield two-handed spears in one hand. Have I mentioned the 12 lethal high CR-traps?

Editing and formatting are very good, I didn’t notice any game-breaking glitches. Layout adheres to a printer-friendly two-column standard and the pdf comes fully bookmarked for your convenience. EDIT: Minor bookmark hick-ups have been taken care of. The pdf also comes with an array of full color artworks and…well. Artworks are expensive, I get that – especially artworks like some of the ones we can see herein – there are some neat pieces in here. Some. There also are several pieces in here that are stock art and while beautiful, have been used before in numerous publications. Also, unlike previous Book of Beast-installments, the artworks don’t blend too well together, adhering to very different styles.  Also, there’s something off about the way they’ve been integrated into the respective pages – perhaps it’s the color vs. b/w-discrepancy between artworks and the rest of the page, perhaps it’s the visible outlines of the artwork’s borders showing up slightly on some pages – in the end, they don’t fit organically with the very basic no-frills b/w-layout. The pdf is extensively hyperlinked for your convenience – EDIT: Some minor hyperlink-glitches have been cleaned up, increasing their usefulness

Dale McCoy Jr. and Richard Moore can create great monsters – no doubt about that and, coming from a proud tradition of great monster supplements, this one had me stoked hardcore – and indeed, these high CR adversaries are mostly awesome and ooze threatening iconicity. But.

But the monsters could have used monster lore DCs or at least a tad bit more fluff. And once I’ve seen one artwork used for 3 or 4 publications and then reused, it loses some of its potency. Still, I wouldn’t complain (too loudly) about that – if the artworks at least partially managed to evoke a sense of cohesion. Instead, they actually, at least for me, detracted from the book’s appeal in some instances: When obvious stock art that wasn’t intended for the creature in question clashes with a new artwork and when the styles are so radically different, the book suffers – especially since the full color artworks in every instance just clashes with the pdf’s layout to the point where it’s imho visually jarring. The hyperlinks and bookmarks also suffer slightly and make this pdf feel like it’s been rushed out of the door with some artworks missing/motivation waning.

Now don’t get me wrong – this is still a great collection of high-level adversaries, but this pdf had all the makings of becoming a supplement as legendary as the foes included in these pages – and squandered it in minor issues that could have been addressed. I also often try to comment when a layout is truly gorgeous -what Marc Radle has done for Kobold Press-supplements comes to mind, and unfortunately, this pdf is the contrast – a full color artwork, some frills – anything really to make the artworks feel less jarring would have greatly benefited this book of beasts.

Why not e.g. make a box per page and limit the respective artwork to said room? Jon Brazer Enterprises has shown that they can make cohesive-looking monster books and in this one, the layout is really distracting – from the per se excellent content. While not every creature herein is great, the staggering majority are and the amount of work the statblocks take off one’s shoulders make this worthwhile. Even with aforementioned glitches  and the relatively undetailed, yet gorgeous NPC-statblocks, the additional content and general quality of the crunch makes this worthwhile – though I can’t help but feel regret at what this book could have been. My final verdict, in spite of the minor rough edges, clocks in at EDIT: 4.5 stars, rounded down to 4 for the purpose of this platform and a definite recommendation to any DM excited by what I mentioned and in search for some foes to drive the fear back into the players.

Get this neat collection of high-level threats here on OBS or here on d20pfsrd.com’s shop and make your PCs fear again!