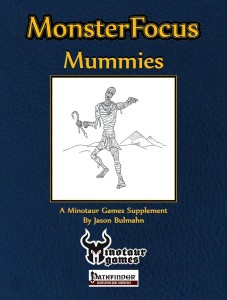 This installment of the Monster Focus-series is 6 pages long, 1 page front cover, ~1/2 a page SRD, leaving us with 4 1/2 pages of content, so let’s take a look!

After a short introduction to the matter at hand, we get a list of skill-DCs to identify mummies before getting 4 new feats:

-Crushing Slam: Make a single attack at full BAB as a standard action and don’t add your str-mod to damage, but instead make a trip attempt without provoking an AoO – per se a nice feat with its Str 21 prerequisite, though I wouldn’t let it near PC’s hands.

-Curse Breaker: Roll twice versus curses and if you can’t get rid of a curse via repeated saves, you can do so now with 5 consecutive saves. Seriously? Curses are often plot-devices and 5 consecutive saves feel excessive for those that aren’t. Not a fan.

-Rapid Rot: Mummy rot fouls the flesh faster until the first save is made, at which point regular frequency sets in. Neat!

-Ward Off: When being able to identify a foe with a knowledge skill check, you may keep foes from making melee attacks versus you when presenting an item the creature is vulnerable to, unless they succeed at a will-save versus 10 + 1/2 level+ cha-mod. I love the concept, coming from a Ravenloft background – I’m all about Achilles heels, but damn, not like this. One knowledge rank as a prereq for universal access is just broken – weaknesses should be unearthed via story-telling/research7as part of modules and entitling players with such a feat to ward off foes is too simple -especially with holy symbols counting against ALL UNDEAD as weakness – the idea is cool – but the execution isn’t.

Next up are new alchemical items – we get embalming fluid, oil that burns and may make weapons temporary flaming, holy incense and censers and sacred salts that make targets more susceptible to mummify – one of the 5 new spells, which deals damage as linens encase foes and turn them into mummies fast. Another of the spells allows you to make anti-curse charms, blast foes with sand (or erect walls from it) or conjure up scarab swarms, though the latter essentially is only a variant of summon swarm.

We also get 4  new magic items – the  scarab swarm conjuring canopic jars, a basalt cat figurine, a charm versus mummies (including mummy rot and curses) and a scepter that works as a magical club and can conjure forth walls of sand and sand storms (variants of ice storms).

Next up are three new traps – sand suffocation, scarab tides and a curse versus thieves – all being awesome. There also are three new variants for mummies  -decrepit mummies at CR -2, mummy priest at CR +2 and shifting mummies at CR +1 that can cloak themselves in a semblance of life.

We also get 3 adventure-hooks, all of which are rather neat.

Editing and formatting are top-notch, I didn’t notice any glitches. Layout adheres to a printer-friendly two-column standard and the pdf comes with ok b/w-artworks. the pdf comes sans bookmarks, but doesn’t necessarily need them at this length.

What remains after this pdf is an overwhelming sense of disappointment – the pdf per se is anything but bad – but honestly, the feats feel a bit clunky and I would have preferred  a focus on the monster’s arsenal – but that I won’t hold against this pdf. What I do hold against it, though, are the uninspired variant mummies and the lame variant spell – the latter wouldn’t bug me, were this longer – but it isn’t. My frames of reference regarding mummies are Classic Horrors Revisited, Necropolis and Van Richten’s Guide to the Ancient Dead – and especially the latter 2nd edition book offers SO MUCH more ideas that cold have been used here –  Bog mummies, non-Egyptian cultures, indestructibility etc. – there’s so much cool stuff out there concept-wise and instead of expanding the creature mummy, of adding truly intriguing tools to DM-arsenal, we essentially get items and ideas that one would expect – nothing wrong there, but neither did any piece of content make me want to use it. I guess even Jason Bulmahn sometimes can’t evoke this sense of wonder. My final verdict will kick in at 3 stars – an okay offering, but don’t expect to be blown away.

You can get this kit of options for your mummies here on OBS and here on d20pfsrd.com’s shop.