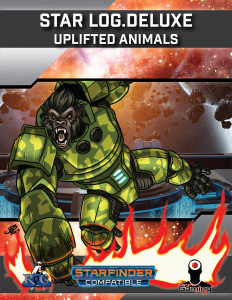 This super-sized Star Log clock in at 17 pages, 1 page front cover, 1 page editorial, 2 pages of SRD, leaving us with 13 pages of content, so let’s take a look!

All righty, as always, we begin this supplement with a brief context for uplifted animals within the frame of the Xa-Osoro system shared by Everybody Games and Rogue Genius Games before diving into the uplifted animal race. Uplifted animals are very much defined by their progenitor species, and are treated as both animals and magical beasts, with the official type being magical animals. Huge kudos: The pdf accounts for effects that treat different types differently. Uplifted animals may only receive datajacks and augmentations gained via class features, such as a mechanic’s custom rig and have limited telepathy 30 ft. – good call. They also get low-light vision. The nanite technology that enhances them grants them +2 to any ability score, -2 to Charisma, Intelligence or Wisdom. Again – nice – these can cancel each other out, should you choose to make that decision. Speaking of nice: “If you’re an uplifted animal, you likely…” and “Others probably…”-sections are included.

The pdf then proceeds to go one step beyond – not only do we receive detailed notes on life cycle, physiology, etc., we also get vital statistics for different age categories. While they have no unified homeworld, the pdf does provide some intriguing suggestions, and from life milestones to cuisine, we do get detailed notes on them, all in all managing to make them feel like a distinct species, in spite of the wide open nature of the concept.

Now, I’ve delayed this for long enough: We get means to depict uplifted animals of sizes ranging from Diminutive to Gargantuan – and there is an interesting balancing mechanism employed: They all have a reach of 5 ft. Why? Smaller uplifted animals can dart to and fro, while the larger ones are more cumbersome. Space, obviously, varies, from ½ feet t0 20 feet, to be precise.

Beyond sizes, each uplifted animal chooses one locomotive ability, one major species trait and two minor species traits. Locomotive abilities are pretty self-explanatory, and include burrowing, being amphibious, all-terrain or gaining an extraordinary fly speed – the later increases in speed by +10 ft. at 5th level, just fyi. Some of the more potent locomotive abilities are balanced by decreased land base speeds, but allow for a pretty fine-grained differentiation: You could, e.g., choose to have an amphibious uplifted animal – that’d be 30 ft. regular speed and swim speed. Alternatively, being aquatic translates to 15 ft. land speed and 60 ft, swim speed – so yeah, regardless of what you choose, the uplifted animal remains playable, and from short-range flight to gliding and sprinting, plenty of nice options are presented.

The pdf then proceeds to provide a pretty extensive list of minor species traits that include darkvision, additional arms (if you’re already multiarmed), being heat or cold inured, etc. Minor nitpick: Being heat inured only provides the “degree”-sign – it’s obvious that °F is meant, but if you’re like me and used to °C, that may briefly trip you up; not something that’ll hamper the verdict or negatively influences the pdf’s integrity, but something worth mentioning. Minor species traits also include being amphibious (as opposed to having amphibious movement as gained via locomotive traits– the distinction here deserves serious applause) and another thing that gets applause? Natural weapons is more precise than in the core book, thankfully properly stating that there is choice between the different damage types. Kudos. From having an yroometji-style pouch to prehensile tails and roars, there is a lot to customize here. Kudos: Bonus types are concise and well-chosen, even accounting for the fact that rolling charge has a circumstance bonus instead of the usual racial bonus. This also extends to the shed skin ability taken from the Ikeshti, which is uncommon in being untyped – deliberately so. Kudos for maintaining system-consistence here.

Speaking of kudos: This generator of sorts, while mighty, is still subject to GM’s discretion, of course, but can allow you to create uplifted versions of a ton of species and animals, even ones not found on good ole’ Terra. Anyhow, the pdf then proceeds to present two massive pages of sample uplifted animals made with this generator. The animals covered here are: Bear, cat, dog, elephant, fox, gorilla (Grodd!), hagfish, hamster (HECK YEAH!), hedgehog, hippopotamus, lion, penguin, raccoon, rat, shark (early 90s cartoons, anyone?), squox (!!) and tyrannosaurus rex (!!!). There are more than applications of the engine above, though – they also provide a guideline of sorts: The uplifted penguin, for example, has the unique Toboggan major species trait, while an uplifted squox gets squox tricks. The section, in short, highlights how to apply the engine. There is one complaint here: The uplifted raccoon lacks ability score adjustments and Hit Points, but you can look them up easily. The fellow should have 2 Hit Points (being Tiny), and have +4 Dexterity, -2 Strength, plus the ability score adjustments you can freely assign. So yeah, the concise nature of the engine keeps the material, in spite of this guffaw, functional, which makes this hiccup, ultimately, aesthetic only.

On the next page, we stare into the adorable picture of an alien space corgi, who seems to be the iconic for the uplifted animal paragon – you have to be an uplifted animal to take the archetype, and at 2nd level, you gain your choice of a major or two minor species traits, or choose a feat from a varied list though the GM retains some control here. This alternate class feature may be taken again at 4th, 6th, 12th and 18th level. The pdf also presents 7 new feats: Bestial Body nets you multiple legs; Cornered Animal nets a bonus to atk, and increased damage when hitting a foe’s KAC+8, but only when the only creature threatening the foe. Internalized Translator is cool: When encountering a language you don’t know, you may make a Culture or Computers check – on a success, you get comprehend languages for 10 minutes per level; can’t be used again until you spend Resolve to regain Stamina. Nature’s Weapons nets you a vesk’s bite – and proceeds to provide the precision I lauded above. Primal Rage nets you a kind of lite rage, but one that feels perfect for gorillas etc. – including knockback unarmed strikes and fatigue afterwards. Cool! Talking Animal does pretty much what you’d expect – it makes you REALLY good at passing as your progenitor species. Wild and Free, finally, nets your + BAB to KAC, and BAB-2 to EAC while unarmored.

Editing and formatting, on a rules-language level, are precise to a t. On a formal level, as noted above, there are a few hiccups that can briefly cause the reader to stumble. Thankfully, the pdf is structured in such a smart way that the few bits of information that have fallen by the wayside can easily be deduced from the book, relegating the glitches to the aesthetic realm. Layout adheres to a nice two-column full-color standard, and the artworks are cool. The pdf has no bookmarks, but doesn’t necessarily need them at this length. They’d have been nice to have, but aren’t necessarily required.

I spent much more time with Alexander Augunas’ uplifted animals than I expected – this supplement is a very dense offering, even for the crunchy Star Log-series. Now, the size categories available will probably have elicited a kneejerk reaction of horror from most GMs accustomed to PFRPG, but since SFRPG handles size categories differently, this actually works better than an initial impulse would lead you to believe….particularly since the reach issue has been circumvented in a rather elegant manner. If anything, that’s how I’d describe this engine – it is elegant in all of its choices. The archetype allows you to create truly bestial uplifted animals, should you choose to; the base engine and its examples teach by showing, ensuring that the material presented within remains valid in the future. Now, personally, I am not too fond of more minmaxy races, and +6 to Dexterity is brutal; then again, e.g. the Shobhad provide a precedence for an ability adjustment of +4 to Strength. As a whole, comparing e.g. an uplifted hamster to a ysoki, things generally check out – the hamster has burrow speed and better senses, but is more fragile (!!) and lacks the ysoki’s moxie and gets one racial skill bonus less.

That being said, while I see no serious balance issues here, very conservative GMs may wish to restrict uplifted animals to the range of Small to Large; in that range, the engine purrs like a kitten. Even beyond it, it is smooth, mind you – and while *personally* I will implement such a limitation for aesthetic reasons, it is mostly a matter of taste and the same reason why I wouldn’t allow for Shobhad PCs.

As a reviewer, I can marvel at the elegance of the material presented here, and am glad that the few editing glitches that made it inside never compromise the integrity of the supplement per se. From Gorilla Grodd to the sentient mice and dolphins of Douglas Adams to TNMTs or other anthropomorphized animals from beloved cartoons, this encompassing engine is an inspired offering I can wholeheartedly recommend to all Starfinder groups. My final verdict will clock in at 4.5 stars, but I will round up due to the few glitches not hampering the book, and add my seal of approval to this supplement, for not only its elegance, but for the fact that it presents a mighty tool as a pretty kickass uplifted animal race generator that manages to retain its balance in spite of its wide open nature.

You can get these cool uplifted animals here on OBS!

Oh, and guess what? Everybody Games and Rogue Genius Games have a klickstarter bundle going on, one that contains a TON of really cool files! You can check it out here!

If you’re enjoying my reviews, please consider leaving a donation or joining my patreon! Thank you for your consideration!