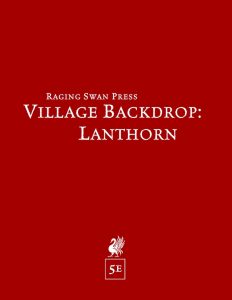 From a rules-relevant perspective, we get the proper pieces of information regarding the settlement’s demographics and the classic market-place section is similarly included and properly modified to represent 5e’s stance on magic items. Kudos for not simply cutting that one – the custom result really is appropriate for the settlement!! Prices of food and accommodation can be found for the respective establishments and, as always, 6 whispers and rumours have been included as red herrings/adventure seeds to further develop or ignore. The pdf also includes the classic sections of lore that PCs may be familiar with and a total of 6 events that the GM can use to further kickstart adventuring, should the PCs dawdle. As a minor complaint, the second entry reads “As #2, but this merchant caravan…” – that should be “As #1…”.

Life in Lanthorn is surprisingly ordered and peaceful and nomenclature is provided in the settlement’s demographics-section, though no general dressing habits and the like are included this time around. On the criticism side, the pdf does offer some truly tantalizing concepts: You see, the magical lanterns of the place are rumored to be sentient and seem to exhibit fiery, destructive capabilities – that we don’t get siege weapon/magic device stats for them is somewhat a lost chance. Similarly, aforementioned volatile troll-exploding liquid would have deserved proper alchemical stats as far as I’m concerned. The marketplace just notes double fire damage…double of what? On the plus-side, the village does offer something amazing: Beyond the well-done standard map, we also get a lavishly-illustrated side-view-version of the village in b/w – big kudos for this very evocative piece.

Creighton Broadhurst’s Lanthorn is one absolutely AMAZING settlement. I adore this place. The explanation of the atypical nature of the Flameskulls and the 5e-marketplace-section are certainly appreciated. The place’s visual representation is glorious and the threat of trolls serious enough to warrant magical laser-lanterns. (At least that’s how I picture them.) In short – this pdf has it all – Lanthorn is a fantastic village and, for me as a person, one of the coolest in the whole product line. At the same time, I was slightly disappointed by the lack of mechanical stats for the eponymous lanterns and the killer-troll-burn liquid, which are obvious key components of the village. Sure, a GM could handwave those…but having precise stats for them would have been the icing on the cake, at least for me. Hence, the 5e-version is equal to the PFRPG-version in what it offers and lacks and misses my seal of approval by a small margin, making the pdf clock in at 5 stars. Good step up for the 5e-village backdrops!