EZG reviews Tinkering 201: 27 Inventions for the Tinker Base Class

Tinkering 201: 27 Inventions for the Tinker Base Class 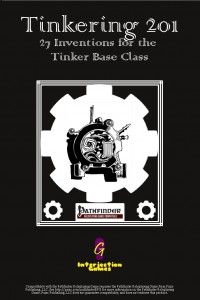 This pdf is 6 pages long, 1 page front cover, 1 page SRD, leaving us with 4 pages of content, so let’s take a look!

We kick off this pdf with a new innovation that will make Tinkers much more useful – Alternative Locomotion nets you access to the drill bit, paddleboat and rotor inventions in one fell swoop.

Which is also a spoiler for 3 of the innovations in here: E.g. rotors net fly speed with clumsy maneuverability that can be upgraded by +10 ft. with a further invention or increase its maneuverability and mount weapons on aerial automatons, which would otherwise would be precluded. A droptube and even a bombing compartment can allow you to create a fleet of flying bombers at your disposal.

Paddleboat automatons can be replaced with submersible automatons – yes: Create your own submarines! And thankfully the invention also addresses air supply. Under water, the new harpoon invention is the only one a submersible can fire. Have I mentioned that aquatic discharges of static shields?

But the pdf not only has invention-trees for locomotion-themed automatons – the tinker’s signature lackeys may now also come with firearm proficiency and mastery or create one bullet via integrated repair kit once per day, they may also learn to blast foes once per day – and reload firearms as a free action, resulting in deadly fusillades at the cost of an expanded misfire range. We also get a repelling version of the repelling shield that increases the AC of automatons that can be increased in two steps.

Unfortunately, not all inventions work 100% smoothly – Metallic/Omnimetallic coating are unfortunately broken – they allow the tinker to make attacks of the automaton count as either silver, cold iron or adamantine. Why EVER take anything but adamantine? It ignores so much, it’s broken. Especially when compared to the damage penalty of alchemical silver. Adamantine counts as +4, cold iron and silver as +3 as per the rules. That being said, I made a huge mistake in my first version of the review – it is ONLY the slam attack, NOT any integrated weapons that benefit from these inventions. Mea Culpa!

Automatons may also be studded with a bodyguard subroutine, catching ranged attacks as an AoO when hitting with 1d20+automaton AC -10 + 2 when also screaming “Noooooo” – of course only when adjacent to the target of their defend order. With an upgrade, the bodyguard automaton may then decide to attack or continue defending.

Finally, there is an upgrade for rocket arms and a combination of that one with the kamikaze invention, for some final blasts.

Editing and formatting are very good, I didn’t notice any significant glitches. Layout adheres to Interjection Games’ 2-column b/w-standard. The pdf comes sans bookmarks, but needs none at this length.

This makes automatons work in various circumstances and environments, greatly enhancing the versatility of the Tinker-class and further enhancing its usefulness and per se can be considered a great addition to any Tinker’s arsenal.

Edit: And well… I efed’ up – While I still consider the option to choose between different coatings strange,  did get one crucial detail wrong – only the slam attacks of the Tinker-class’s automatons can thus be enhanced. My sincere apologies for this oversight go out to the author.

Lacking any gripes, my final verdict will be upgraded to 5 stars + seal of approval for the cool submersible etc. options.

You can get this neat supplement for the Tinker here on OBS and here on d20pfsrd.com’s shop!