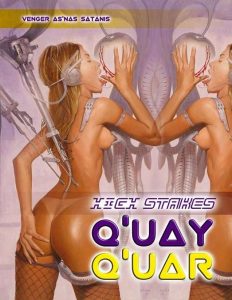 This module for Alpha Blue clocks in at 18 pages, 1 page front cover, 1 page Kort’thalis publishing glyph, ½ page editorial, leaving us with 15 ½ pages of content, so let’s take a look!

Wait, before we do: This is a review of a module for Alpha Blue, a game that is a kind of homage to 70s’/80s’ scifi-porn parodies. As such, sex and violence, particularly sex, are themes herein. A good litmus test is the cover: Does it offend you? If so, steer clear. If not, then proceed.

I do assume that you’re familiar with Alpha Blue in my review.

Before we take a closer look at the module itself, we are introduced to two new Alpha Blue classes – the first would be the Xenologist, who knows A LOT about alien xenology: 1/scene, he causes those attracted to him be drawn to his animal magnetism; those that believe themselves superior feel stupid and those that believe themselves brainy will realize the advantage of having him be a part of the crew. The range is 10’. Now, while functional, personally, I think it’d have been more elegant to codify this ability more precisely: One effect on a 4, 2 on a 5, 3 on a 6 and a bonus effect – a little table for success and failure. The second class herein would be the pickup artist: Basically, the SDM rolls a hidden d6 and on a 1 or 2, the prospective target is potentially available sans much fuss. No complaints here.

Beyond these two classes, we also get some rules for the benefits of sex: Special abilities with limited uses (like 1/hour, 2/combat, etc.), you gain a bonus use of that ability. You can trade sexual gratification for stealing the spotlight, allowing for the doubling of dice on a single action. You can forego getting off in favor of a reroll of a single dice pool reroll. I really like these. They add a bit of tactical depth to the game. Kudos!

It should be noted that two pages of the pdf are devoted to campaign worksheets for an Alpha Blue campaign, with influences, 23 quick questions to establish leitmotifs, etc. allowing for a pretty quick and dirty means to establish the base-lines. Beyond these, tables for 20 scifi names, 4 general dispositions, 6 reasons to be here and 10 sample outfits can be found, allowing for some quick and easy NPC-dressing for the characters herein. It should be noted that, structure-wise, we do not get a synopsis or the like – the SDM is strongly advised to read the entirety of the module before trying to run it.

Anyways, this is as far as I can go without diving into SPOILERS. Potential players should jump ahead to the conclusion.

Only SDMs around? Great!The PCs are standing over the smoldering corpse of a foe…and then, some beeping can be heard. The communicator of the fallen enemy displays an alarm: Tomorrow, the galaxy’s largest Q’uay Q’uar tournament will be held on Zeta Minor…and the convention of Universal Pickup Artist Association also will take place there! If that’s not enough motivation yet, the pdf does provide no less than 6 custom angles for the SDM to employ. En route to Zeta Minor, the PCs will have a chance to avoid a cloud of strange matter that may result in bizarre occurrences….like being contacted by versions of themselves from an alternate reality, currently on the run from a dark star elf bounty hunter. (Oh, and “drow”? Bad racial slur…that ought to be funny) Oh, one more thing: The alternate versions of the PCs are really bad a-holes…

Now, the module is obviously about participating in the q’uay q’uar game – and there are several means to do so: There are two different levels of abstractions for quick resolutions…but where the pdf goes the extra mile would be the first and most rewarding way to do so: You see, there is a bonus 1.5-page pdf here that explains the game, as well as a full-color, high-res jpg of the game table: “Q’uay” means “purple”, “Q’uar” means yellow – this is a two-player game. Purple goes first and both players start by placing their starship on a hex of the appropriate color. A player can move 1 hex per turn. When a player moves a spaceship on a hex with a symbol, the respective symbol’s effect kicks in. If both players’ starships are in the same hex, combat commences. This is resolved via competing d6s. Ties go to the aggressor.

There are two ways to win the game: Be the last man standing or ascending the symbol that’s the Star Throne: If you do, you roll 1d6: A 1 kills you, while 4+ wins the game. 2-3 means that political bickering requires a reroll next round. Wormhole hexes let you jump to another wormhole. There are also space stations, alien mercenaries and assassins – all contain the chances for bonuses and for penalties. The basic game is pretty simple…but more rewarding with the optional rules: 2d6s each round make the game chaotic: Preventing a color from ascending the throne, temporarily no wormholes…the mini-game is fun, the visual representation of the playing field is amazing and better yet, the game can be resolved quickly and thus doesn’t halt the game for too long. HUGE kudos for this fun mini-game! Even if you dislike Alpha Blue, this may well be worth getting for the mini-game.

However, beyond this mini-game, there is plenty of adventuring potential: Hessina Goldenfire, the vibroswordswoman and expert gambler, Jenna Rayne the space-slut who is seeking to settle down, Talador Gisholm the pickup artist (who gets stats, unlike Hessina, which was a bit weird)…the NPCs depicted are colorful and interesting. Crime lord Syresh Vos, a really powerful Bobba Fett style killer with several unique and fearsome, nay, legendary items, meanwhile wants to steal the prize money…and then there’d be Quai-Gon Jizz. A total douchebag, former knight in white satin…and the best player in the tournament…particularly because he cheats! The nasty zedi comes with full stats…and the PCs should better stop him and his nasty, drugging pipe.

Oh, and on the last day of the tournament, there’ll be a hologram…promising a fortune for the heads of the PCs. The instigator, btw., would be Fructis New Zaelyn, associate of Grabba the Butt and on the board of Purple Prizm’s directors…but he’ll probably get away. How that turns out? Well, that’s up for another adventure to determine!

Editing and formatting are top-notch, I noticed no serious hiccups or issues. Layout adheres to the neat two-column full-color standard for Alpha Blue-modules. The pdf comes with a second, more printer-friendly version of the pdf. The pdf also is fully bookmarked for your convenience and the addition of the jpg for the game is great – two thumbs up.

Venger As’Nas Satanis’ latest Alpha Blue module is BY FAR the best he’s written for the whole product line. While one NPC that could have used stats didn’t get any (Hessina), this is a surprisingly crunchy, fun module. The set-up is creative and the different ways to resolve the game by playing the game or via the quicker, more abstract rolls are amazing, allowing the SDM to account for the peculiarities of the table, be they home-campaign or convention game. The NPCs are cool and the “further adventuring” angle is amazing as well – the finale this time around is not sudden or problematic. In short: This is a fun, creative, well-rounded module. I have only the slightest of complaints and they pale before the otherwise cool module.

As an aside: You can easily expand Q’uay Q’uar to work as a team-game: Take a sheet of hex paper, place glyphs and allow for multiple players per color. I suggest doubling the field-size for every pair of additional players, placing as many additional glyphs on the map (excluding star throne, which will remain in the center) as on the original field and…there you go. The game’s pretty simple and fun and if you do expand it to sport more players per color, I’d suggest providing dice-bonuses for ganging up on single vessels, etc.

…there I go, expanding a bonus mini-game. Anyways, back to the review: I considered this not only to be the most rewarding Alpha Blue module so far, it also is the best, craftsmanship-wise. It is pretty sandboxy, but sports concise rules and details. All in all, I thoroughly enjoyed this one – my final verdict will clock in at 5 stars + seal of approval.

The module is part of Venger’s second print compilation of modules, which you can find here!