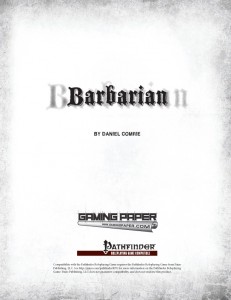 DISCLAIMER: As a short look at the editorial will show you, I’ve looked over the beta of this pdf and helped develop it – I did not control the final outcome or have a say in what goes and what stays, though, and thus don’t feel my verdict is compromised in any way.

That out of the way, let’s take a look, shall we? We kick off this pdf with a thoroughly well-written piece f in-game prose that gets one in the mood, detailing the hostilities between greco-roman seeming people and barbarians, before getting into the respective traits for barbarians – which take a surprisingly smart approach – whereas usually, traits are exchangeable minor bonuses with one-sentence explanations (and hence not particularly fun to read), this pdf takes a different approach – first of all, it determines several basic roles, the first of which would be non-adventuring barbarians.

In boxes with a black background and white letters (not very printer-friendly…), we get the respective traits, in this first case bonuses to initiative under certain circumstances – the first one netting a +2 to initiative whenever you don’t have maximum hit points – which is not something I’d consider good design…always carry around that kitten for the 1 hp-scratch… On the plus-side, each trait, even beyond the description of the general role in barbarian society, comes with a full-blown description that makes the trait more than just a numerical bonus.

Other traits allow you a bonus to will saves against spells and spell-like abilities of foes you’ve intimidated and another nets you, 1/day +1 round of rage if you hit a foe twice in melee in the same round – which is hard at low levels and later rather easy. While not particularly elegant design-wise, not broken either. More interesting would be imho a trait that lets you track creatures as if they’re larger or one that mitigates the fatigued condition’s penalty when using aid another. Changing facing upon defeating foes, being the last of your kind (and thus hardened to fear- and despair-effects) – all come with nice fluff. Another trait allows you to reduce the duration of the fatigued condition incurred by allies by 2 rounds (for fellow barbarians) or one round (for non-barbarians), but not fatigue with an indefinite duration. Getting 1/day plus one final round of rage when damaged in the last round of rage or receiving one free, non-AoO-provoking move action upon receiving damage, but before falling unconscious make for other interesting concepts via traits.

Next up would be some simple archetypes, the first of which would be the Raider – raiders lose medium armor proficiency, but become faster, later get a bonus to dex and may use essentially a spring attack variant of charges – i.e. charge as a standard action and then move again in a straight line, not exceeding your double base movement. per se cool ability for wolf-pack style tactics, but *usually* moving through the square of an opponent requires an acrobatics-check and moving in a straight line through a target’s square doesn’t always make sense…just picture the gelatinous cube blocking the dungeon tunnel to get where I’m going.

The second archetype would be the Auctor, who gets less rounds of rage, but instead gains a kind of favored enemy-style bonus against his own type (and later – other types). Okay, I guess.

The Lusus Naturae takes a penalty to cha while raging, but may use this penalty as a bonus when intimidating and is a specialist at using the intimidating glare power.

The pdf also offers three new rage powers: Death totem and its lesser and greater brethren – lesser death totem allows you to incite fear in foes hit in melee (or struck by your ranegd attacks), while its regular version allows you to ignore nonlethal damage, ability damage, energy drain and fatigue-themed effects while in rage and the greater version allows you to substitute 1d4+1 points of temporary str-damage for your regular damage – the latter might be considered too powerful, especially due to not requiring a save and stacking with itself.

The pdf closes with 1 new feat, which nets you HP when you reduce a nonhelpless creature of HD greater than you to 0 HP – which means that in order to break this, you require kittens with metric ton of templates added – but it still can be done. A caveat of x/day uses would have helped there.

Editing and formatting are good, though I noticed some minor glitches here and there. Layout adheres to a beautiful 2-column b/w-standard and the pdf has A LOT of text – you’ll get your money’s worth from this – the font is small. The pdf has no bookmarks, but doesn’t require them at this length.

Author Daniel Comrie has crafted an interesting supplement – taking the (at least for me often) very boring task of reviewing trait-pdfs to a point where I actually enjoyed reading this – the traits and concepts herein resound, are inspiring even, and the prose can be considered neat indeed. Now crunch-wise, the pdf isn’t particularly elegant in some cases, with slight ambiguities in the wording/rules and similar hick-ups. Now that doesn’t mean the pdf is bad – quite the contrary: Design-wise, a lot of damn cool things are done with traits, often offering more than a bland situational bonus on roll xyz that we’ve come to expect from (and be bored by) traits.

I’m in a bit of a conundrum here – on the one hand, this pdf tries very hard to be innovative with one of the most yawn-worthy components of character design and succeeds. On the other hand, it also has some serious rough edges that should be addressed. How to rate this, then? In the end, I will settle on a final verdict of 3.5 stars…but have to round down to 3. I still encourage you to check this out – the prose and design-ideas to scavenge are rather interesting, and hope the author will continue to try to do interesting things with traits.