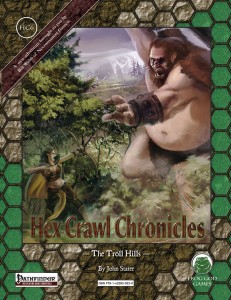 This installment of the Hex Crawl Chronicle-series clocks in at a massive 48 pages, 1 page front cover, 1 page editorial, 1 page ToC, 2 pages SRD, 2 pages blank, leaving us with 41 pages of content, so let’s take a look!

As always with modules, the following contains SPOILERS. Potential players should jump to the conclusion.

All right, still here? Let’s go! First of all – the hex-crawl map to explore this time around spans two massive pages and depicts mostly mountainous terrain with hills, cut through by rivers. The population of this rather…hostile area can be summed up by belonging to 3 ethnicities – the descendants of the once proud civilization of golden men, degenerated to hunter-gatherers (and kind-of guardians of their now-disease-ridden ancient ruins), the somewhat pilgrim-like (at least in style) tan or olive-skinned witch-men and finally, the Xanlo River men, hybrids of Witch Men and Northern Men. Beyond these, the area is, surprise, infested with trolls…and hags. The latter with a twist, though – retelling the creature, in this land, elven maidens who have reached 1000 years of age venture forth into the wilderness to become nymphs or dryads…or hags, depending on their alignment. Personally, I love the idea, though it might require some serious reskinning/ignoring of this uncommon ecology. Among the humanoids, few elves still dwell here, but some dwarves remain – the licorice-chewing, bee-keeping Zarkos dwarves. These dwarves can brew a special healing moonshine from their tears when caught under a full moon.

Now I did mention those ruins, didn’t it – well, they include a cement bunker, complete with wights in strange silvery suits – nice pulpy flashback there! There also is a rune-slab to be found here, which may open the way to a mini-dungeon – though one with a confusing map that refers to two levels (level 2 and 3) that are nowhere depicted or commented upon in the text – I *assume* they’re intended for teh DM to flash out, but the map also shows no entry-point. From conjecture, one can deduce that “level 2” is supposed to be the entry…but still. Annoying glitch here.

Beyond poisoned shrooms (tsathoggastools!), trolls, hags and troblins galore, strange mole creatures and trading posts patrolled by clay golem enforcers make for interesting backdrops – but what about rope bridges that suddenly become the battle-ground between an evil cleric and his demons and medusa-brides of a blind wizard? A two-headed troll (including again, a mini-dungeon) and old red dragon, mutating water, animated wooden golems , were-bear druids…quite a few interesting discoveries to be made.

It should be noted that a city of blue glass, devilkin, mimic-troll-hybrids, an archmage’s former sanctum, now the hunting ground of hags, acid weirds, prismatic serpents…and even a hekatoncheires loom in the crags and canyons that dot this area – as always with HCC: Players better be on their toes!

The pdf also has an appendix of the uncommon creatures

Editing and formatting are generally quite good, though not as tight as most FGG-releases. Layout adheres to an easy-to-print two-column b/w-standard with nice thematically-fitting original b/w-art here and there. The maps are serviceable, but as mentioned, not always 100% precise and don’t come with player-friendly alternatives.

John M. Stater knows how to write extremely compelling wilderness-modules and this is no exception – the dynamics, ideas etc. all hearken back to the heyday of mature fantasy, with pulpy elements spiced in here and there. The conversion to PFRPG by Skeeter Green and Erica Balsley is generally rather well done – especially since classes like the Magus, relatively exotic creatures like kami etc. are included, at times reskinned, at times studded with templates/levels etc.

Generally, there’s a lot to do and the dwarven enclaves throughout the hills with their own peculiarities, the strange cults and religions – all these are compelling, as are the remnants of the ancient cultures here and there. Where this one is a tad bit on the weak side compared to other HCC-installments, would be the meta-narrative: While there are connections between sites, dynamics etc., when compared to the Pirate Coast, or installment no.3, the movers and shakers feel a tad bit weaker in style and connectedness. This holds especially true for the mini-dungeons – for the first time in the series, none truly captivated me; In fact, there are various locales herein, be it the city of blue glass or some similarly awesome spot, I would have rather seen detailed properly.

Now bear in mind, I’m complaining at a very high level here – this module will occupy you for many, many sessions and drips inspiration, but for me at least, it somewhat lacked the je ne sais quoi, the focus on the sense of antiquity of a raw world – the troll hills are an iconic locale, but perhaps the focus on two types of critters didn’t help too much here…or I’m just getting spoiled…

Anyways, my final verdict will clock in at 4.5 stars, rounded down to 4 for the purpose of this platform.

You can get this delicious hex crawl here on OBS and here on d20pfsrd.com’s shop.

Prefer old-school? The S&W version can be found here on OBS and here on d20pfsrd.com’s shop.