With a Bullet Point: 7 Bard Feats 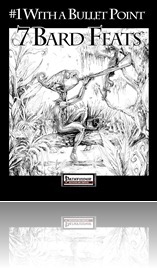 This BP from Super Genius Gamesis 4 pages long, 1 page front cover, 1 page SRD, leaving us with two pages of content, so let’s check this out!

Editing and formatting are top-notch, I didn’t notice any glitches. Layout adheres to SGG’s 3-column standard and the pdf has no bookmarks, but at this length needs none. The feats herein, while nice, are not for everyone. The aforementioned problem stemming from Arcane Cadenza with bardic performances as a pooled resource and the devaluation of these rounds by eliminating the difficulty of choice via providing essentially a vast array of rounds and supreme flexibility via arcane cadence. When I have the choice, I rather have the pool-approach to Bardic Feats pioneered in RiP’s 101 Bardic Feats, which also provides the better bang-for-buck-ratio. All in all, while not essentially a bad pdf, the feats herein feel, at least to me, slightly less refined than usual for SGG – the mechanics for Eldritch Arrangement and Extemporize feeling not that streamlined to me. Aforementioned incompatibility also means this is much less useful for me than usual and thus, I feel I have to settle on “only” a final verdict of 3.5 stars – 3 if you’re like me and don’t like aforementioned incompatibility, 4 if you don’t mind.

With a Bullet Point: 7 Bard Feats is available from: