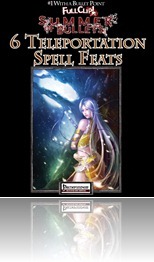 This pdf from Super Genius Games is 4 pages long, 1 page front cover, 1 page SRD, leaving 2 pages of content, for 6 new feats that modify teleportation spells, so let’s check these out!

Conclusion:
editing and formatting are not up to SGG’s flawless standard and I noticed a minor glitch. Layout adheres to SGG’s 3-column landscape format and the pdf has no bookmarks, but needs none at this length. The spells herein are interesting to be sure, with Slow Teleport and Unexpected Arrival in particular being rather cool (especially when combined with Dark Roads &Golden Hell’s concept of “Between”). However, Apportation’s lack of specified action and the other feats didn’t wow me and thus, I’ll settle for a very respectable final verdict of 4 stars for this BP.

With a Bullet Point: 6 Teleportation Spell Feats is available from: