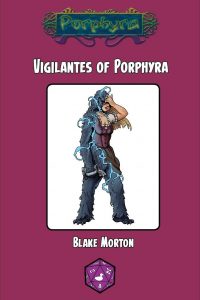 This installment in the Porphyran class option-series clocks in at 33 pages, 1 page front cover, 1 page editorial, 3 pages of SRD, leaving us with 28 pages of content, though it should be noted that the pages are A5 (6” by 9”)-booklet-sized, allowing you to print up to 4 of them on a standard A4/letterpack-page, so let’s take a look!

We begin with the dread pirate (somewhat unfortunately named – this is now the 4th class option I know that uses this name), who replaces seamless disguise with a +5 circumstance bonus to maintain his disguise, but does not apply the bonus to using vigilante talents while in social identity. Instead of 1st level’s social talent, he gains Sea Legs. Interesting modification: If the character selects the avenger specialization, his Fort-save-progression changes to good, while his Reflex save becomes bad. For the purpose of alcohol imbibing, he treats his Fortitude save as the Will-save granted by vigilante-progression. The archetype also receives access to several unique social talents and vigilante talents – the former would contain, for example hold breath, enhancing a ship’s speed for a short duration or tavern reknown, which is basically a micro-reknown in his favorite dives. The vigilante talents include Siege Engineer sans prereqs, later Siege Gunner, better fighting with a hook hand, not losing Dex-bonus while climbing and losing ACP in the lighter armors or bonuses via shouting orders.

At 4th level, drinking grog can provide benefits, depending on vigilante specialization – either rage or bonuses to AC and saves; these are upgraded at 12th level. 7th level nets Drunkard’s Recovery, including a better iteration at 13th level, replacing 7th level’s social talent. All in all, a better vigilante-ized version of the 3.X PrC of the same name with some drinking-related material mixed in. Solid.

The mustached mauler (someone reads Dr. McNinja, obviously!) gets a decreased array of skills, only 4 + Int mod, and is treated as having brawler levels equal to vigilante level for Improved Unarmed Damage purposes when in vigilante identity. They also gain good Fort-saves. While in the mustache identity form, they do not receive Wisdom to Will-saves and they may not benefit from Int- or Wis-bonuses, but may select talents from both avenger and stalker specialization lists, with the exclusion of effects that are based on hidden strike. The archetype receives a monk-y Cha-bonus to AC (instead of the monk’s Wis)and the talents contain the option to execute Awesome Blows, self-granting Charisma modifier DR 1/round (instead of the AC-bonus) and high-level negation of magic weapon enhancement bonuses. Also cool: Another talent can net you the option to ignore special weapon abilities via your ignorance score – 1/4 class level worth of such bonuses may be ignored! (Pretty cool – never saw that one before!) All in all, a rather hilarious archetype that may not be flavor-wise appropriate for all games, but for a gonzo game, it can be pretty cool!

Thirdly, we would get the archetype that is considered to be the star herein – the shapeshifter. Instead of the 1st level social talent and the vigilante talents gained at 4th, 8th and 12th levels, they can shapeshift (with the usual +10 Disguise bonus) – this is done via the shapeshifting pool, equal to thrice the class level. This not only powers the archetype abilities, but also, via the duration it has, doubles as the resource to maintain the vigilante identity. The shapeshifted form is represented by a shapeshifting specialization – unless I miscounted, a total of 11 such specializations are provided; each has several SPs that can be paid for via the aforementioned pool. The respective specializations employ different scaling progressions and degrees of choice and they, ultimately, also allow for different degrees of play styles. Whether you go for e.g. natural weapons via the draconic specialization or assumption of angelic aspects, the respective progressions diverge sufficiently to provide a strong leitmotif. The vigilante talents provided for the archetype allow for the taking of an additional specialization starting at 6th level, at -4 vigilante levels and quicker on the fly changing. the capstone nets +2 specializations. I like this archetype; while there are some minor hiccups lower-case attribute, etc., it is per se a nice offering.

The pdf also contains feats: Magical Children can take one at 1st level to instead gain the benefits of the sorc /wiz or druid spell-list; there is one that reduces the 24-hour-cool-down of vigilante class features to 12; a cool charge/Cleave-synergy feat. better benefits after repeat exposure to frightening presence is cool…but e.g. Piercing Charge, which should, wording-wise, build on the previous feat, has some kind of wording hiccups that makes it hard for me to discern its intent.

The social talents provided for the class are intriguing: Better cover when posing as an artist, wide-spread contacts, a social grace/Skill Focus-synergy trick, a high-level wordy wit follow-up, magical craftsmanship, Brilliant Plan as a build-up from Safe House via Safe House Resources, efficient use of improvised weapons… and have I mentioned wordy wit? This one lets you ready actions and conceal them, much like Conceal Spell (which is not properly capitalized)…pretty cool.

The pdf also contains several vigilante talents, some of which are based on Cleave and the new options introduced herein, while another unlocks a race trait the vigilante does not usually possess while in vigilante identity. This once constitutes a bit of a fallacy in that it assumes all race traits to be equal in power when they’re clearly not – some sort of scaling mechanism would be appropriate here. 1/day anticipate thoughts (more often at higher levels), gaining a sidekick and modifying contacts to grant the vigilante, for example, temporary access to combat or teamwork feats – which is generally cool. However, RAW, neither contact, nor vigilante must meet the prerequisites for the feats granted, which renders that ability seriously overkill and in need of the usual caveat, in spite of the ability not working under duress.

The pdf also features an extensive list of solid Porphyran-races favored class options for the vigilante as well as a very fun level 5 mustached mauler, including a nice boon.

Editing and formatting are a bit inconsistent in both formal and rules-language departments – in some sections, even complex ability-interactions are done right…while in others, we have nonstandard wording, non-capitalized feats and the like. Layout adheres to Purple Duck Games’ 1-column standard and is pretty printer-friendly. The pdf has some nice 1-page full-color artworks I haven’t seen before and the pdf comes fully bookmarked for your convenience.

When one ignores the contributions of veterans N. Jolly and Perry Fehr, then this would be Blake Morton’s first lead-author book, unless I am sorely mistaken. The good news here most definitely is that there is certainly promise here. While I’ve frankly seen shapeshifting done to death in various iterations, I still consider the archetype dealing with exactly that topic to be among the better representations of the concept. Now, personally, I’m a huge fan of Dr. McNinja, so the mustached mauler pulls right at my heart’s strings…and it also has some actually creative rules-tricks I haven’t seen done before, which is a big plus to ole’ me. That being said, I was pretty underwhelmed by the pirate, who, to me, feels a bit unfocused. There also are some instances herein where the rules-language could have been more precise, lacks an anti-abuse caveat or deviates from the standard.

While not bad on their own, the number of them does rise over the course of the pdf to a level, where I have to penalize the book. Still, considering the gems herein, I believe this to be, as a whole, on the upper side of the rating scale, if only by a margin – hence, my final verdict will clock in at 3.5 stars…and while I’d usually round down, I tend to offer a bit of leeway to lead author freshman offerings, which is why I will round up for the purpose of the usual platforms.

You can get this collection of class-options here on OBS!
Endzeitgeist out.