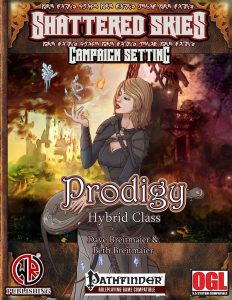 This hybrid class clocks in at 15 pages, 1 page front cover, 1 page editorial (misspelling author names), 2 pages of SRD, 1 page back cover, leaving us with 10 pages of content, so let’s take a look!

The prodigy class gets d8 HD, 4 +Int skills per level, proficiency with simple weapons, saps, rapiers and light armors, 3/4 BAB-progression and good Will- and Ref-saves. Spellcasting-wise, the prodigy gains access to the bard’s spell-list, but casts these spells as psychic spells.. She also gets access to all spiritualist spells with somatic components – for a grand total of RAW NONE. Let me quote the base rules of psychic magic: “Therefore, psychic spells never have verbal or somatic components…” This is a big, nasty glitch in the base spellcasting engine of the class – undoubtedly, this was supposed to provide a means to balance the class…but however it was intended to work…it unfortunately doesn’t. No go. The prodigy spellcasting is governed by Charisma and spontaneous.

The spellcasting also fails to specify that the class gains the spiritualist’s knacks – or is it supposed to get the list of e.g. the psychic? I assume no, but yeah. Second glitch in the base spellcasting engine that should have been caught.

Thematically concise, but problematic and odd would also be the wunderkind ability: If the prodigy is a young creature, her abilities are calculated as though she was 2 levels higher. I *get* what this tries to do, but it should really be an archetype. Why? Because in games where everyone plays young creatures, that’s an advantage no other class offers. In games where PCs are adults, it does not provide the template…making it not really work as intended for any group.

The key class feature of the prodigy would be the muse, which shares alignment (why? -Come on, LG prodigy with CE muse could be amazing!) and languages with the prodigy. A muse can either be harbored in the prodigy’s consciousness or partially manifested. It may also be manifested fully and is then treated as a summoned creature. Full manifestation takes 1 minute and it retains hit points, unless slain, in which case it regains 1/2 maximum hit points. The little word “can” regarding refusal to manifest in the presence of other pets should probably be eliminated. More on the details of the muse later.

The 3rd level ability has not been properly bolded and nets bonded manifestation, though a muse may only manifest in incorporeal form. 4th level nets either Deceitful or Persuasive as bonus feats.

Starting at 6th level, the prodigy gets an ability I generally applaud: Masterpiece Adept. This ability seeks to unchain, if you will, bardic masterpieces, which are an amazing, but problematic piece of crunch – the big issues of the masterpieces would be that they have exceedingly steep costs and are not that flexible. The prodigy may use these during incorporeal bonded manifestation and uses her class level as her bard level and spend prodigy spells known to meet the prerequisites. So, what about other costs? Well, at 12th level, the prodigy may perform a bardic masterpiece without spending the associated cost to learn it and at 20th level, the prodigy may use any Perform skills to meet the prerequisites of the masterpieces. Wait, what? Okay, so, there are a couple of issues: For one, the text contradicts itself – once, the ability is gained at 5th level, while another sentence quotes 6th. Secondly, since we use the muse’s bardic performance to fuel bardic masterpieces, who takes the actions to activate it? The prodigy? The muse? The precise way in which the masterpiece is activated is opaque – RAW, neither prodigy, nor muse can meet the activation prerequisites, since the prodigy knows the masterpiece, but does not have the resource used to power it. Also: Does the muse have to maintain the performance? The action economy here needs clarification. That being said, considering that this is a freshman offering, the rules-language is better than I expected!

7th level yields a bonus spell determined by the muse: Magic circle against good/evil or remove curse, depending on alignment. The spells have not been properly italicized. At 11th level, the prodigy can 1/day generate a variant of secure shelter (correctly italicized!) and at 12th level, up to 8 creatures that spend 8 hours there, can add a +1 enhancement bonus to their melee weapons – for a total of prodigy class level rounds. Activation is a swift action. 17th level adds a special weapon quality, determined by the prodigy’s alignment. These qualities have not been italicized. As a further nitpick: The ability RAW allows generating an enhancement bonus beyond +5 – this should cap.

At 17th level, the muse’s emblem spell is unlocked as a 5/day SP. As a final complaint: 2nd, 5th, 10th and 19th level yield no ability. 10th at least nets a new spell level, but the others are dead levels.

Okay, let’s look at those muses! Muses get d10, are incorporeal creatures and thus use Dex for atk and CMD. Muses get 2 + Int mod skills per HD, 3/4 BAB-progression and Red- and Will-saves are good saves, Fort the bad save, capping at +5 and +9, respectively, similar to the phantom. Muses begin play with 1 feat and increase that to a total of 8. Analogue to that, starting at +8, the muse increases her Charisma and Wisdom scores by up to +8 over her 20-level-progression. This should be noted, since the muse, being incorporeal, receives her Cha-mod as a Deflection bonus to AC. They begin play with 2 natural slam attacks (imho should specify primary/secondary) with a base damage of 1d4, increasing that to up to 2d6. Muses have the spiritualist’s phantom link and share spells at 5th level and every 5 levels thereafter, excluding 20th, they increase an ability score by 1. Muses can duplicate countersong, fascinate and inspire courage (scales up to +4, according to the table). At 12th level, inspire greatness is unlocked and such performances only work while fully manifested. Per se a cool idea: A muse’s bardic performance, while based on a bard, is influenced by her prodigy’s Perform check, which is made upon resting: Failure to meet DC 10 equals the loss of 1 round and meeting DC 20 and 30 nets 2 and 5 bonus rounds, respectively – which is rather potent, considering how easy to cheese skills are. The muse gets the 30 ft. delivering of touch spells of the phantom, with the corresponding upgrade at 12th level to 50 feet. Table and text contradict each other regarding emblem spell, which ostensibly can be cast 1/day as a SP by the muse. 6th level nets the muse always-on fly speed of 50 ft. with good maneuverability, which is rather soon when compared to other pets. At 7th level, the muse’s attacks become magic for the purpose of overcoming DR.

Base stat-wise, muses get the make-believe muse-subtype (why invent a subtype?) 30 ft. movement, +2 dodge to AC, Dex 14, Con 10, Int 7, Wis 10, Cha 15. Bluff, Diplomacy, Fly, Knowledge (planes) (lacks the bracketed “int”), Sense Motive and Stealth are class skills, +1 freely chosen at 1st level. Additionally, the muse gains a Knowledge and Perform skill based on artistic focus chosen – unnecessary: The muse gains auto-ranks in these bonus skills, which means she’s always capped for them. Sooo, why not give the muse a mechanical reason why she’ll WANT the skills at max potency? Just sayin’.

A total of 9 different artistic focuses are presented, ranging from Callie (epic poetry) to Ula (astronomy). I like the choices here, but the impact on the overall class should be expanded – beyond the skills the respective choice grants, the focus only influences the emblem spells and grants a single ability, which is gained at 9th level. These are interesting, in general, and include a 30 ft.-aura of heroism (not properly italicized – like all spells in this section…) – do the allies lose the effect when they leave the aura? I assume so as per similar abilities. What’s the CL for dispelling purposes? Taking 20 for a Knowledge (history) check as a standard action in conjunction with lore master, comparatively, seems weaker. Another muse nets a 4d6 channel energy that improves to 5d6 at 17th level, using Wisdom as governing attribute and another one nets improved evasion – sooner than the rogue, but on par with the monk. A concentration-hampering field of hilarity is a cool idea.

Editing and formatting…are not up to par. There are a bunch of instances where formatting is flawed and the rules-lingo could have used some adjustments here and there. Heck, the editorial gets the author’s names wrong. Layout adheres to an aesthetically-pleasing two-column full-color standard with nice artworks. The pdf comes with very basic bookmarks – I would have expected a bit more here. Annoying comfort-detriment: Copying text is disabled. If you want play these folks, you’ll have to print this out. So, that’s a minus.

Beth Breitmaier and Dave Breitmaier have not taken the easy route here. The prodigy hybrid class tries to take some exceedingly complex concepts and blend them into one class. When I saw that this was a freshman offering, I expected a train-wreck…and I did not get one. Now, mechanically, the action economy needs a bit of fine-tuning and so do other aspects of the class – the prodigy can be very potent (seriously – two strong spell-lists, plus a phantom with bardic abilities…ouch!), but it’s not a class whose strength is immediately apparent. Perhaps also since it, time and again, references its parent classes and demands that you read up their abilities and puzzle them together with the prodigy’s…which is a no go. Nobody should have to flip between 3 classes to get how one class works.

So, as you’ve seen above, beyond my formal complaints, I have to call this a flawed class – I wouldn’t allow this as written and it needs some serious fine-tuning. At the same time, it actually fulfills several expectations I have for hybrid classes: The prodigy plays different than its parents, which is a big plus. Furthermore, it *feels* completely different. It does feel like it has its own concept and niche. Which brings me to the artistic focus component: It’s what sets the muse apart and should have been more pronounced. By talking away power from the base chassis and making this choice matter more, the class could have gained a massive boost of diversity between different prodigies. So, as a note for the future, dare to be distinct and further develop the unique aspects of the identity of the class! The basics are here already! 😀

What does that leave us with? Concept-wise, the prodigy is cool, but it would have required a good rules-editor/dev to polish it into shape. I am positive that this has the potential to be a 5-star offering with some retooling and tweaking. The imagination, the ideas, the distinct identity and soul are there – the class feels distinct and not just like a Frankenstein-hybrid of stitched together parts. So yeah, it is a promising start for the author duo, but also highlights the inexperience with some of the finer rules-aspects. I’d bash this more, but I do tend to give freshman offerings some leeway…and if you’re willing to invest a bit of time, a bit of nerfing and a bit of tweaking/expanding, you can make this a pretty cool addition to the game without having to rewrite everything. And it actually feels like an original class, not just two smashed together. While the editing and formatting is jarring, I can see this class have value for some rounds, in spite of its flaws. Taking the freshman bonus into account, my final verdict will clock in at 3 stars – if you invest time in it. If you want something to whip out and play, steer clear.