Threats: Echoes of the Typhonians (Diceless) 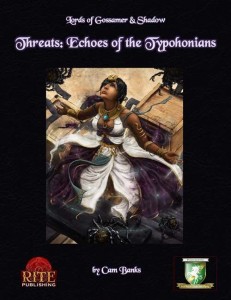 This supplement for Lords of Gossamer and Shadows is the first providing a spotlight for a particular kind of threat (D’unh) faced by the Gossamer Lords and Ladies (and other – we don’t discriminate on the great stair…) clocks in at 23 pages, 1 page editorial, 1 page front cover, 21 pages of content – so let’s take a look!

So, as has become tradition with Rite Publishing’s supplements, this one as well in written in aptly-crafted in-character prose, introducing us to the so-called Usari. What are these people? Well, you’re probably familiar with the saying that everyone has a Doppelgänger out there? Well, we have one world. With infinite worlds at one’s beck and call, the existence of strikingly similar versions of one’s self would be a given then. The book goes further in concept, though – Usari that actually meet are locked into a strange trance and then, rather inexorably, reality bends and both merge, with equipment and all and a stronger Usari emerges, the weaker one’s personality subsumed, but part of the new, merged being. The Usari become progressively stronger via these mergers and both items and memories create new beings – thsi merger is btw. properly codified in LoGaS-rules as a 10-point power.

Now one of my favorite things about LoGaS would be the infinite potential for creativity and this pdf thankfully does not delve into the trap of providing one canonical truth about the Usari and their true nature/origin – instead, we get a vast amount of different theories that range from the Usari being God, to them being avatars of the universe, seeking to destroy the rifts in space and time, to them being servants of the stairs or the fragments of a particularly legendary Typhonian, seeking to recreate itself. The interesting thing here is, though, that Usari are free-willed and may not want their whole being to potentially be “diluted” or worse, utterly suffused under another will – the roleplaying potential with the vast array of origin myths is significant indeed.

We also get sample stats for Usari – depending on their power-levels, these beings are classified in five types, from weakest (1) to strongest (5) and while the first 2 provide generic sample stats, the former 3 provide full-blown original NPCs, all with simply stunning, drop-dead-gorgeous, highest tier original artworks, powers, background story and advice on using the respective Usari as ally or enemy, of course also providing artifacts and creatures, info on domains and their goals if applicable – all 3 are glorious characters, btw.!.

Now as you may realize, introducing these guys and gals as a mystery to be solved would be most effective and hence, extensive advice on planning the reveal and even going full-blown Usari War (especially nice, if you want to go captain exposition via an NPC and go full blown…). Better yet, the advice for playing Usari that DOES address the potential for power creep and the inherent risk of fusing – lose the merger, lose your character… and yes, this has potential galore!

Editing and formatting are top-notch, I didn’t notice any glitches. Layout adheres to RiP’s two-column full-color standard and the artworks (mostly original) rank among the best you’ll see in any publication – GLORIOUS.

LoGaS stands and falls with the power to incite the imagination, to foster creativity and not stifle it and this book does a superb job – exploring just enough of the concepts to make this supplement a just fun to read, even if you don’t play LoGaS – the concept translates well into just about all systems and settings. Author Cam Banks does a superb job and makes this a glorious addition to any LoGaS-game and beyond – well worth 5 stars + seal of approval.

You can get this glorious ecology/treasure trove of campaign seeds here on OBS and here on d20pfsrd.com’s shop!
Endzeitgeist out.