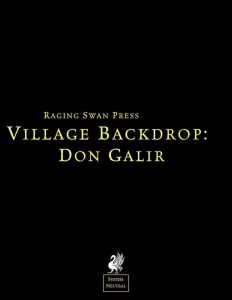 Anyhow, as always in the series, we get the usual quality of life benefits for the GM that render this series so beloved: We receive notes on local dressing habits, nomenclature, and some sample pieces of information for PCs that actually do their legwork. 6 rumors are presented as well. No magic items for sale suggestions are provided – particularly odd for a dwarven settlement.

Speaking of character: 4 NPCs are provided in Raging Swan Press’ usual, flavor-centric manner, and as always, the keyed locales come with neat read-aloud text. The supplement goes a bit farther than usual, though: Contained herein are brief notes on the assumed dwarven pantheon worshiped in the duchy of Ashlar, and the supplement features a new exotic weapon, the thunderaxe, which basically a combined axe/hammer –interesting here would be the fact that this indeed does use the old-school proficiency mechanic, should you be using it. The new material, Tordel, the soul steel, is still only featuring a more or less flavor-centric depiction, but…well, it’s the system neutral version. I can’t well complain about that here, right?

Editing and formatting are very good on a formal level; on a rules-language level I can’t complain in this version either. Layout adheres to Raging Swan Press’ two-column b/w-standard, and includes quite a few nice b/w artworks. The cartography is b/w is per se nice, though, as mentioned before, the lack of scale noted can render the place a bit more opaque than what I’d have liked to see. The pdf comes in two versions, one intended for screen-use and one for being printed, and supporters of Raging Swan Press’ patreon receive player-friendly versions of the maps, at least to my knowledge.

Steve Hood’s take on the dwarven hold (additional design by Martin Webb) is interesting indeed: Making Wellswood’s setup a backdrop for a cool subterranean village is clever and incredibly efficient – particularly in the details: From fishing rods available to the monthly festival, this place feels fantastic in a grounded, plausible way, and really captured my imagination. In many ways, it is a remarkable success, only slightly tarnished by the settlement’s scope feeling more opaque than it should be. My final verdict will be 4.5 stars, rounded up.

You can directly support Raging Swan Press on patreon.

If you enjoy my reviews, I’d appreciate a donation, or joining my patreon here.