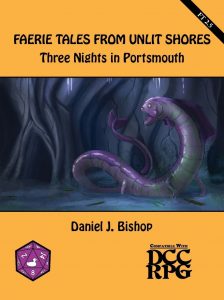 This module/expansion clocks in at 19 pages, 1 page front cover, 1 page SRD, leaving us with 17 pages of content, so let’s take a look!

Well, what is this pdf? In short, it could be considered to be the anthology/director’s cut-version additional content for the second part of Daniel J. Bishop’s AMAZING “Faerie Tales from Unlit Shores”-series, The Portsmouth Mermaid. As such, there will be minor SPOILERS for that one in here as well, but mostly of a structural nature.

Anyways, this being an adventure-review, the following obviously contains SPOILERS. Potential players should jump to the conclusion.

All right, only judges around? Great, so “The Portsmouth Mermaid”‘s middle section is pretty much a free-form sandboxy investigation with weirdness happening in the middle section. My one piece of minor criticism was that the section could have used a bit more for the players to do – if you have good investigators, it may be a bit too simple. These modules, then are perfect to splice in or to use as a bridge to the next installment of the series. As simpler scenarios, they can also be transplanted as brief modules beyond the context of the series pretty easily. Since “The Portsmouth Mermaid” is set against the backdrop of Yuletide celebrations, the default season herein in supposed to be winter.

Scenario number one would be “Blood for Cthulhu!”, wherein cultists of the tentacled one capture an ally of the PCs (or a PC of a player conveniently not present) – this adds a sharper focus on this cult, which fell behind the depiction of the Dagon-worshippers integral to the plot of the Mermaid. As an alternative, there may not even be a kidnapping villain, with all being a set up of the Dagonite cultists to interrupt the lesser of two evils. (Yes, in case you haven’t read FT 2 – it’s perhaps the one scenario I know that features frickin’ Cthulhu-cultists as the LESSER evil…go figure why I like it…) The trail leads into the salt marsh, where a roll with Intelligence and Luck determines the route taken, the opposition encountered…as well as the time passed, for a timer’s ticking…something to bear in mind while the PCs deal with salt hounds, weird cultist chanting and a chance to break into a massive array of naked cultists conjuring forth a horrid being – if the PCs are too late, a polypus white thing may await the PCs…and they may find an idol, which is powerful, but yearns for sacrifice. The deadly consequences…well, can be cataclysmic for your psyche, though.

Scenario number two, Trail of the Rat, has seemingly less repercussions, as giant talking rats abduct a child and drag it into a deserted building. The whole set-up here, fully mapped for your convenience, is tailor-made to introduce PCs stuck in the investigation to the tunnels below Portsmouth, while dealing with the Pied Piper of Portsmouth and introducing the PCs to the ghouls of Portsmouth in a not necessarily hostile manner. A nice little expansion!

Scenario number 3 deals with the hiding place of a stack of pirate gold, supposedly hidden in the earth: The Open Tomb contains actual names for those interred in the crypts and the level of detail presented here is neat indeed. Sooner or later, the PCs will stumble over a strange, house-sized beast of lethal proportions – the mythical sea dragon, a strange amalgam of scale-less fish and salamander and a horribly powerful adversary. Thankfully, PCs itching for combat will have a chance to deal with a deadly soul hunter and an elemental grue here, both of which feature significant and flavorful components. On a success, the PCs may go out of this sidetrek with some serious treasure, which is exceedingly detailed…but the PCs will have paid for it dearly.

Editing and formatting are very good; while I noticed a minor formatting hiccup or two, but no serious glitches. Layout adheres to a printer-friendly two-column b/w-standard. The pdf’s b/w-artwork is fantastic, original and high-quality. The full-color cartography is nice, though I would have liked player-friendly versions sans keys. The pdf has no bookmarks, which constitutes a minor comfort detriment.

Daniel J. Bishop’s 3 little scenarios here greatly enhance the experience of running part II of his amazing series, but also as standalone scenarios, they are very flavorful and fun. That being said, sans “The Portsmouth Mermaid”, the scenarios do lose a bit of their potency and flavor. As a whole, this module offers some cool sidetreks and expansions that render the main module a fantastic experience. I have to rate this on its own, though – which is while I will settle on a final verdict of 4 stars for this; however, if you do get “The Portsmouth Mermaid”, consider this to be a superb and must-buy expansion.

You can get these sidetreks/expansions here!

You can get the whole bundle with FT 2 here on OBS!