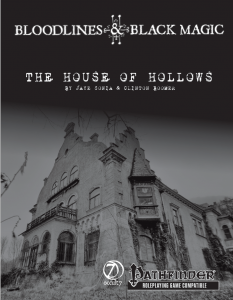 The second adventure for Bloodlines & Black magic clocks in at 33 pages, 1 page front cover, 1 page editorial, 2 pages of SRD, 1 page back cover, leaving us with 28 pages of content;

The module comes with an additional bonus pdf, which contains 1st-level pregen stats, with special abilities and the like all fully included. This pregen-file is presented in a landscape standard, and includes b/w-artworks for the characters. Each character spans 2 pages, so if you print them, you can have a handout-character on a single sheet of paper, which is indubitably useful for e.g. convention games, one-shots, etc. The characters have properly spelled out connections, arcana and oddities noted, and feature a fey-blooded mesmerist, a spirit-blooded slayer, a seraphic-blooded brawler, a dragon-blooded spiritualist (including stats for the phantom Mr. Hunter), a jinn-blooded psychic, and s spirit-blooded investigator. These pregens are also included in the module itself, and the module has a handy sheet that lists all connections, secrets, etc. ready – I strongly suggest printing that page and having it on you when running the module, as it also spells out which lore the characters know is correct, and which is deliberate misinformation..

These pregens have built-in reasons to investigate the eponymous House of Hollows, but if you need other reasons, a handy table lists objectives by organization, as well as three more distinct hooks. A unique angle, and a good reason to play the pregens, would btw. be that the module has a mechanic that rewards the PCs with a variety of benefits if they come clean regarding a secret they have; if you’re not using the pregens, I strongly suggest that the players come up with an analogue web of intrigue/secrets for their own characters, as the module does benefit from the dramatic tension generated thus. The module includes no less than 5 boons that the PCs can attain, as well as 4 suggested oddities. I have no complaints regarding them per se, but should note that one of them is predicated on using encounter cards – which is odd, since I can’t recall BL&BM suggesting their use.

Speaking of odd things: The pdf has a single red line in the background running down on either the left or right side on each page; this line runs behind some, but not all visual elements (for example, only through the non-white entries of tables) and honestly irritated me. At first, I thought it was a subtle cue, but I’m pretty sure it’s just a layout glitch that should be rectified.

But let us proceed to the eponymous House of Hollows, maybe you’ve heard of it…but shush, if you’re a player, then the following is not for your eyes. Jump ahead to the conclusion to avoid the SPOILERS that will follow now, all right?

All right, only GMs around? Great! The House of Hollows can appear, and it is a place of the lost – lost people for many pregens, for others, it may be lost things. The house is travelling, for some 70-odd years it has done that…and when it appears, it stays for 7 days, always a bit odd, always a bit different…but usually on the perimeter of a settlement, in disquieting black and purple.  It is an odd house, taking a cue from House of Leaves in that its dimensions can’t be measured accurately. The house sickens all those that can’t Pierce the Veil, spooking off the non-initiated, and it can become invisible. Theoretically, the players can try to burn it (other means of damaging it being not exactly promising), but doing so will doom all inside, so there’s a good reason not to do it. Interacting with the House of Hollows may yield one of 4 types of token: There are element tokens, exit tokens, life tokens and grave tokens. Life tokens can heal; Grave tokens require that you enter e-mail addresses into the computers in the house – when used against other PCs, this’ll net a penalty for them, a bonus for the one who entered them. Exit tokens, obviously, are there to exit in the end…

I really liked a premise of the module: The House enforces an esoteric law above all else: The law of 7 Possessions. You may not enter the house with more than those. The house has additional rules, and those that break these risk the ire of the structure – and the retribution in the guise of its Hollow Ones. These include not losing your tickets (issued upon entering with the 7 possessions), no stealing, a prohibition to harm other visitors, and, well, obviously no open flames or harm to the physical structure.

Furthermore interesting here: The house *is* perceived at the start of the module, and the first task will be to talk the NPCs gathered here out of trying to get inside/waiting, etc. Not all of these individuals will leave, but the fact that the sudden appearance of the house is not simply glossed over? Like it! Even better: This is an early chance for the PCs to earn exist tokens. Speaking of which: Each encounter area also comes with a map of the room depicted; while no map of the entire house per se is provided, the room-by-room map approach worked well for me in this instance, though I would have loved to get handout-style player-friendly one-page versions of the respective areas. The first of these put a broad smile on my face, as it’s a puzzle steeped in the esoteric lore so crucial to BL&BM, focusing on elemental pillars – and a dark art item (like the Ring of Fenris, or the Amber Amulet of Atu) may be acquired, which is a grand boon during the adventure, but a bane in the final encounter. Or so the module states. De facto, none of these items had any bearing whatsoever on the final encounter regarding additional difficulties. This room btw. also houses a secret room, a cage – here, the PCs can observe some foes to come…nice and creepy foreshadowing

After this brainy encounter, the module switches it up – in the next room, the PCs will witness a man in bondage mask, Mr. Sledge, use a sledgehammer to kill a NPC: The room is well lit, but the light flickers off – 3 rounds later, it turns on, shows Mr. Sledge, and has him kill another NPC! This will induce panic. If the NPCs run out, well, then it’s time for the PCs to meet the blunt edge of his weapon. Escaping through the windows here may btw. help two of the pregens save their daughter in an optional encounter…

Beyond that, we have a feast laced with poison, as well as a rather creepy library that plays some seriously neat mind-games if handled properly by the GM. Speaking of which: The final encounter has the House focus its powers into the Great Mr. Sledge (new stats), which allows the PCs to finally use Pierce the Veil on the house – and this final combat is brutal. It very much is a horror encounter, with a CR 5 monstrosity that is probably pretty far above the PC’s league…but whether they escape will be up to their wits…and potentially, their willingness to screw over their allies…

Editing and formatting are per se good on a formal and rules-language level, expecting aforementioned inconsistencies. Layout adheres to the series’ two-column b/w-standard, and the pdf comes with neat b/w-artworks. The pregens are a nice touch, and I liked the functional b/w-maps, but less so the lack of player-friendly versions. The pdf comes fully bookmarked for your convenience.

Gosh darn it. Jaye Sonia and Clinton Boomer have written an adventure that per se is right up my alley. The House of Leaves-ish surreal house angle is great, and the atmosphere evoked is awesome. I liked all of the relatively linear encounters here, as they all contribute something meaningful and surreal, horrifying – this module genuinely managed to give me goosebumps, and its mechanics are suitably relentless and brutal enough to drive home the whole horror aspect, and that the PCs can’t always slay their way to the goal. This has all the markings of an excellent adventure.

The red-line glitch bothered me on an aesthetic level, but it’s not a big deal. What is a big deal, though, is that this has all the tell-tale signs of a much larger module cut down to its barest minimum.

We have optional encounters that are pretty much tailor-made to hint at more, and yet they stand alone, their hints petering out; we have, for example, the cellar angle that goes nowhere. This clearly was supposed to have been a whole mansion with more complex mechanics. After all, why introduce not 1, not 2, but 4 (!!) types of token to track, when ultimately one would have sufficed for everything this module offers? Why introduce the dark arts items with their SPs, when they aren’t really relevant to solving the module, and when the announced complications don’t happen?

As a player, you won’t necessarily notice those – but as a GM, they make running the adventure much tougher (and somewhat more confusing) than it should be at this length – this is, when you boil it down, a great, straightforward romp that blusters and professes to have a depth to it that, or so I believe, was left on the cutting floor, or simply not realized due to a lack of budget. And that’s a pity, for all the hallmarks of an outstanding adventure with a ton of narrative depth and twists and diverging plots are here, but all of that is ultimately reduced to smoke and mirrors.

Ironically, like the house it depicts, the module does not like being closely looked at – for then, one cannot help but see its flaws. Then again, perhaps that’s almost an ARG version of BL&BM – don’t try to Pierce the Veil on this, and you’ll probably enjoy it. If you do, you’ll feel like BL&BM characters – you wished you hadn’t, but can’t unsee what you saw. My final verdict can’t exceed 3 stars.