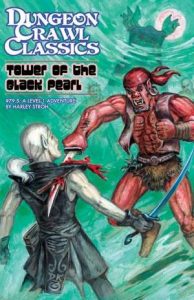 This module is intended for 4-6 level 1 characters, and it works particularly well if one of the PCs has Sezrekan as a patron, though that is not required. A well-rounded group is suggested, as always, though the difficulty of the module is somewhat contingent on how nice the judge feels – there is one way that can undo death herein, making it a pretty good introduction to non-funnel gameplay for those new to DCC! Note that this only holds true for Lawful heroes. As usual, we get a break-down of the encounter table of the place, and the module comes with properly spelled out and atmospheric read-aloud text. The module also sports two different b/w-handouts of key areas. A brief table of wandering monsters is included.

It should be noted that this module has an alternate ending that can render this one of the most impactful campaign starters I’ve seen. I’ll discuss this in the SPOILER-section. Genre-wise, the module is essentially all about getting a cool treasure out of a dungeon – a classic, honest extract-the-treasure-scenario without bells and whistles.

All right, only judges around? Great! So, the module’s premise per se is pretty simple: Once every decade, the Empyrean Ocean’s tides recede far enough to reveal the highest parts of an undersea tower, 5 miles from the ocean; the night this happens is now! If this does not suffice to entice your PCs, well the notorious pirate Savage Quenn might be mugging a magician, who fills them in. Thee pirates of the Black Mariah are also after the legendary Black Pearl.

The tower of the black pearl is guarded by such pirates, but provided the PCs persist here, they gain access to the Hall of Mysteries: Here, a massive register, and plentiful candles burn: The register contains the names of all Lawful heroes of the world, with each candle representing their life-force: Snuffing out a candle kills that hero! Conversely, if a lawful PC dies in the adventure, their candle can be relit! This is a great safety net for clever players. After this, we have a chamber of portals: One portal is intended for further adventures, while another requires a magical key of sorts – leaving only one way to go. Both animated fetishes, crab-rats, and the pirates present further dangers in the complex, and there is a scene with a Charon-like boatman – which thankfully presents swimming, drowning, hypothermia, etc. rules,. All handily summed up. Nice. At one point, the PCs will meet Quenn and his remaining men, who propose an alliance – because they (correctly!) suspect a pretty nasty trap room ahead: Quenn plans on betraying the party, obviously – but anyhow: The trap room is one of the good DCC-traps: The deadly component can be discerned quickly by the players if they roleplay smart, and even if they walk in, there is a means to escape. In short: Good design!

Ultimately, the PCs get to find Sezrekarn’s tomb (when he was still mortal), and take ruby gemstones from it: These are required to enter the place, where the black pearl was sealed: The pearl is firmly held in a dragon statue’s mouth – which itself, is in a HOLE in the water, depicted in one of the handouts. To reach the statue, the PCs have to cross the water – which is full of poisonous snakes. Here, only player skill is required; battling through the poisonous snakes is a bad idea, and the most lethal encounter herein. If the PCs take the pearl, the magic holding the water at bay fades – 13 rounds to escape the tower, as the ice-cold waves are rising!

…and then there is the optional ending. This ending elevated a well-executed, linear dungeon-.crawl, a good module, to what I consider to be awesome. If you don’t share my enthusiasm for it, detract a star. Remember the candles? As a default, the water doesn’t extinguish them. But you could, you know, choose that it does. This would slay all the big heroes of the world, exempting the PCs due to their presence in the tower. If you, for example, have been playing in a world where too many high-level former PCs still roam, if you’re playing in an established world with TMGAM-Syndrome (Too Many Good Archmages), this’ll upend the power-dynamics, big time. A kind of reset-button for the setting, a means to make the PCs go properly into adventuring mode – after all, it is their greed that wrought this new age of darkness…

Editing and formatting are very good on a formal and rules-language level. Layout adheres to a 1-column b/w-standard, and the pdf sports nice b/w-artworks. As always, the b/w-map is gorgeous, but there is no player-friendly version included, which is a bit of a downer. The module comes fully bookmarked for your convenience, and the inclusion of two neat b/w-handouts is another plus.

Daniel J. Bishop’s conversion of Harley Stroh’s module is a good example of a well-executed little adventure; I am usually not a big fan of linear scenarios, but this is not only a well-designed example of one, it also sports a sufficient variety of challenges posed, and the alternate ending, as noted, is epic and make this module a rather efficient way to reboot a setting in which have run several persistent campaigns. For those looking for exactly such an angle, add a star to the final verdict. All in all, regardless of whether you do or not, this can be considered to be a success. My final verdict will be 4 stars.

You can get this review here on OBS!

If you enjoy my reviews, please consider leaving a donation, or joining my patreon!