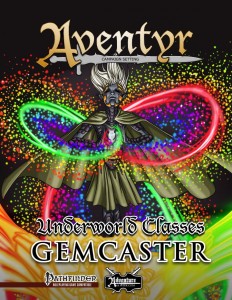 This installment of the Underworld Classes-series clocks in at 15 pages, 1 page front cover, 1 page editorial, 1 page ToC, 1 page SRD, 1 page back cover, leaving us with 10 pages of content, so let’s take a look!

So, what is the gemcaster? The simple answer would be “a metamagic specialist”, but that would be reductive, so let’s first take a look at the proper hard stats. gemcasters are a 10-level PrC that require two skills at 8 ranks plus any three metamagic feats as entry-requirements. They receive d6, 2+Int skills per level, 1/2 will-save progression, 1/2 BAB-progression and 7/10 spellcasting progression – from the looks of it, a full caster PrC with some additional tricks to justify the spellcasting-dead-levels.

At 1st level, the class receives a bonus to Appraise, Craft and Diplomacy equal to the PrC-level as well as the so-called gem transformation. By concentrating for 10 minutes, a gemcaster may transform one or more cut gems into one or more cut gems of a different type, provided the value remains the same. This transformation is taxing, though, dealing 2 points of temporary constitution damage which heal at the rate of 1 point per hour. When using the ability while fatigued, the gemcaster instead becomes exhausted. Alas, the pdf fails to specify whether the fatigued condition also ends with the regeneration of the Constitution damage.

Gemcasters also may use gem magic, learning new types of gem magic over the levels. Unless otherwise stated, a gem magic ability can be used 3/day and these may not be used in conjunction with rods of metamagic.

Now I like things about this base mechanic and I dislike components. I do like the freedom of gemcasters to assign gem-types to metamagic feats they own, thus codifying their own magic and the ability to slowly, but steadily prepare their gem-components, rewarding proper planning on the PC’s part. However, I do not like the economy of the gemcasting per se. If you take most metamagic rods, we quickly realize that gemcasting is a tad more flexible, with no daily cap for free metamagic application in contrast to metamagic rods. Metamagic rods are significantly more expensive first, but the constant costs of gemcasting will quickly catch up to the price of even greater metamagic rods. Now e.g. the elemental rods would require one for each element, whereas the gemcaster can cover that via one ability – here, it pays to be a gemcaster. Ultimately, the gemcaster becomes only a valid option in such cases and when the class casts *A LOT* of metamagic spells, who don’t want their rods sundered all the time. If multiple metamagic rods would break the bank, this class becomes valid. While gemcasting cannot be used in conjunction with a rod of metamagic, it can still be used with regular metamagic. I am quite frankly not sold on this rather circumstantial flexibility really is worth 3 spellcasting-progression-less levels for most of the time – remember, each of the gemcasting tricks can only be used 3/day, akin to a metamagic rod…

And then, there’s the capstone – at 10th level, the gemcaster can utilize two gem magic abilities at once, adding a x 1.5 modifier to the total price. The restriction remains that the total spell level modified cannot exceed +4. Alternatively, the class now can execute a metamagic-feat not chosen by this class at the appropriate cost as if the gemcaster had learned it via gemcasting. The big question here, though, would be whether metamagic feats gained via regular level-progression during the levels of this PrC count as part of the PrC or not – the wording here could be a tad bit more concise.

The final 4 pages of the pdf are devoted to a short racial write-up for the svirfneblin race of Aventyr – which thankfully do not seem to utilize the rather OP racial stats of the default svirfneblin and receive +4 to Craft (any one), Knowledge (engineering) and +2 to one Profession. They do, however, receive a -4 penalty to Bluff, intimidate and Handle Animal checks. The write-up per se was my favorite part of this book – it’s interesting and a fascinating look at the race.

Editing and formatting are good, though some of the abilities could have been a bit more concise in their explanation/presentation, but that is a minor issue. Layout adheres to AAW Games’ beautiful two-column full-color standard and the pdf sports *A LOT* of gorgeous full color art. The pdf also comes with rudimentary bookmarks – enough to work okay, I guess.

Okay, I’ll be frank with you – I do not like this class. At all. I like the gem-transformation, the assignment of metamagic to the gems and I can appreciate the math that went into the pricing of abilities vs. metamagic rods. I did enjoy the fluff for the svirfneblin race. I just don’t consider metamagic a particularly compelling sub-rules-set. It is somewhat clunky, especially when introducing metamagic rods. Don’t believe me? Just search for them and related threads on the boards. Yeah. Now the gemcaster had the chance to codify a special kind of more efficient metamagic that got rid of the issues with rods, but, at least in my opinion, squandered that chance. Instead, the class essentially provides built-in metamagic rods, potentially adding rather than detracting from the complexity of the rules – and for once, I do not mean that in a positive way.

Another issue would be that the class could have fixed the crippled action-economy that spontaneous casters suffer from when using metamagic – while usually, gem magic requires a standard action/is subsumed in the casting duration of the spell, the spontaneous casters still have to deal with the increased action-tax metamagic provides. The pdf also does not really address the potential of combination with heightened spells, leaving me at once excited about the imagery of the class and somewhat disappointed by its content.

Okay, I may very well be too harsh here, but for me, this PrC did nothing that excited me. You get built-in metamagic rods and lose 3 levels of spellcasting progression for them. Yay? I’m sorry and I feel like an utter prick, for the pdf obviously had work put into it and the production values generally are good. But the pdf neither fixed/improved metamagic flexibility, nor provides a significant flexibility gain/ gain of new abilities. The decreased costs quickly peter out (unless you have a pretty quick wealth/level-progression), thus also rendering the economy-factor less of a selling point.

There is nothing wrong with this class. If you want a slightly different reskin of the idea of metamagic rods, the class might strike a chord with you. I did show this to my players, feeling like I perhaps just had it in for the concept, but their reactions were pretty much like mine – a shrug.

The execution of the rules is pretty solid (though not perfect), so if you are looking for such a reskin, this may be awesome for you. For me, though, this was bland and boring. Try as I might, I just couldn’t bring myself to be excited about any component of this class. It just left me utterly unimpressed and, especially when compared to most of the high-concept Underworld Classes, this one falls woefully flat. I wanted to rate this higher, for there isn’t much to complain about mechanically…but that would have felt disingenuous to you, dear readers. After all, when something incites my passion, I try to convey that to you – and from the feedback I receive, I know that my tastes seem to be shared by a significant bunch of fine people. Thus, I couldn’t justify going review-robot on this one. As mentioned, if you like the idea, go for it. But for me, both as a reviewer and as a person, this is a 2.5-star-file, barely salvaged to that level by the nice racial fluff. If the concepts detailed in this review interest you, you should round up instead.

You can get this weakest part of the series here on OBS!