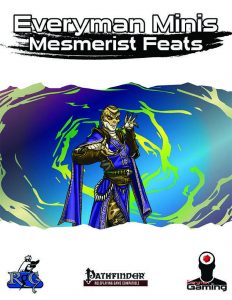 This installment of the Everyman Minis-series clocks in at 8 pages, 1 page front cover, 1 page editorial/ToC, 1 page advertisement, 2.5 pages of SRD, leaving us with 2.5 pages of content, so let’s take a look!

After a brief introduction, we get two new spells: Mindshock (2nd level) laces your attacks with psychic energy that adds +1d4 nonlethal damage due to pain; critical hits cause the target to be confused for 1 round, which is pretty strong, considering the absence of a save to negate. That being said, immunity to mind-affecting or pain effects or critical hits prevents the confusion. The spell has another caveat that makes it balanced for the spell level: A target can only be confused by a single casting of the spell once per day. This limitation is crucial and very much appreciated. Well done. The second new spell would be phantasmal flagellant, which, depending on the class, clocks in at 3rd or 4th level. I love this spell, as it fills a rues-hole I always disliked intensely: It is basically a pain-based version of phantasmal killer that inflicts scaling nonlethal damage instead. Descriptors and scaling are perfect and neat…however, there is one rules-relevant inconsistency that, alas, influences rules-integrity: On a failed save, the target takes nonlethal damage, becomes exhausted and drops unconscious. On a success, damage is halved and the conditions are negated…but the condition mentioned here is fatigued, not exhausted. Sooo…which one is it? Sequence would make me think exhausted is correct, but fatigues imho would make more sense.

Okay, those two out of the way, let’s discuss the feats. It should be noted that, in spite of the respective names, only one feat herein has the Stare-descriptor, which is important, considering that only one stare-feat may be applied at any given time, at least if you do not have Compounded Pain.

So, what do the feats do?

-Agonizing Glare: Adds 12 pain-based spells to spell-list, some with metamagic hard-baked into them. They are also considered to be spells known. If you don’t have the metamagic feat in question or know the spell, you may only affect creatures currently targeted by your hypnotic stare, and sans gaining the benefits of hypnotic stare for them. Learning them properly later allows you to cast the as usual and hypnotic stare applies.

-All-Seeing Sight: Adds 8 divination spells to your spell-list and spells known, but with the same hypnotic stare restriction as before. Locate object can only find objects in range in the possession creatures that you have targeted with hypnotic stare; the same limitation applies for clairaudience/voyance. As you may have gleaned, this does not require that you *currently* target them, making establishing a network of such beings rather interesting…great tool for investigations!

-Burning Stare: Choose electricity or fire; half damage of painful stare thereafter can be turned into that energy type. May be taken twice to gain both energy types.

-Bright-Blazing Stare: Requires burning stare, which means that the 3rd level prerequisite, same as the Burning Stare-feat, makes no sense. That should be higher. Anyways, if a target takes 1 fire or electricity damage, they take -40 to Stealth versus your Perception (important!) for 1 + your Cha-mod rounds. Multiple instances reset this duration. Furthermore, the target of a Burning Stare, regardless of whether it takes damage, must succeed a Will-save or be outlined as per faerie fire until the start of your next turn, meaning that the penalties apply globally, not just to avoid you. And no, they don’t stack with one another.

-Kindling Glare (Combat, Stare): This is another upgrade for Burning Stare, and it unfortunately suffers from the same weird prerequisite-glitch as Bright-Blazing Stare. When using Burning Stare to inflict fire or electricity damage on a target, you inflict +50% damage, as though the target was vulnerable to the energy type. It does not stack with actual vulnerabilities. Additionally, inflicting fire or electricity damage via the Burning Stare feat requires the target to make a Fort-save or contract vulnerability to the energy type for one round.

-Imperious Stare: Cause targets to avoid their gaze from you for 1 round on a failed Will-save, granting you total concealment versus the target. The type of this effect is properly codified. Kudos!

-Majestic Stare: Follow-up feat for Imperious Stare; when a target fails its save against Imperious Stare, it also can’t approach you further for 1 round, duplicating the effects of antipathy. Cool: If a creature fails its save by 5 or more, they also have to prostrate before you, dropping prone, unable to rise. Amazing!

-Wrecking Stare: Whenever the target of your hypnotic stare attempts to save versus pain effects and fails, you can activate painful stare’s effects as though the pain-effect caused damage. If the source is a mesmerist spell you can cast, you inflict damage as though you had made a successful attack and were using painful stare to augment it instead. Big kudos for getting the tightrope-walk of a rules-language construct regarding the second effect! If the triggering effect causes nonlethal damage, you may elect to make the damage caused by this feat nonlethal as well.

-X-ray Stare: See creatures targeted by hypnotic stare up to 20 feet away, through solid matter- Different material densities are provided and interaction with obfuscating elements, are noted. Handy!

Conclusion:
Editing and formatting are generally very good on a formal and rules-language level; apart from the two issues I noted, which unfortunately influence rules-integrity (though the prerequisite glitch is de facto just aesthetic). Layout adheres to the printer-friendly two-column standard of the Everyman Mini-series and the one artwork presented is nice. The pdf has no bookmarks, but needs none at this length.

Clinton Boomer is one of my favorite feat-designers. I have seen him write feats that literally make, by sheer virtue of existing, thoroughly amazing character concepts possible. If anything, there are two complaints I could field against them: They tend to be very specific, and they usually end up on the higher side of the power-level. The feats in this book are more broadly usable, but that doesn’t mean that they lose the high-concept impact I expected from them; They juggle complex concepts within a pretty complex engine, all while making me think of cool ways to use them. I am absolutely certain that pretty much all feats herein will see use in my games at one point, making this, at least to me, an all-killer, no filler supplement.

That being said, no matter how much I like this supplement, the fact remains that we have glitches that influence, in minor ways, the rules-integrity of two components. It is only this minor imperfection that ultimately costs this my seal of approval, though both can be rectified by any GM out there. If you don’t mind these, consider this to be a 5 star + seal pdf. If you do mind, then consider it to still be an excellent file, at 5 stars, which also represents my official final verdict.

You can get these cool mesmerist-options here on OBS!