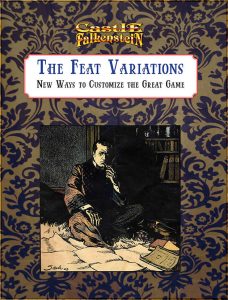 This supplement for Castle Falkenstein clocks in at 22 pages, 1 page front cover, 1 page editorial, 1 page ToC, leaving us with 19 pages of content, so let’s take a look!

Okay, first things first – we actually retain Tom Olam’s traditional frame narrative in this supplement, which was transcribed by J Gray. In the tradition of the excellent engine tweaks presented so far in the series, we begin with the first variation. It should be noted that the pdf is suffused with nice prose, making it an enjoyable reading experience, in spite of its focus on rules. Big plus!

But what is the subject matter here? Well, you probably know that RAW, there is no limit to the amount of cards a player can play when resolving a Feat, allowing them to potentially play the whole hand to maximize its outcome. While this does result in rather amazing deeds, it may not be tonally suitable for all games, and, more importantly, it can lead to CF’s equivalent of novaing tasks. While Comme il faut (yes, I will review that book eventually!) does present options to limit this type of behavior, we have alternatives here, the first of which would be the Hard Limit Variation.

In this variation, we have a limit by Ability Rank: Poor or Average means being able to play 1 card per Feat, Good or Great = 2 cards…you get the idea. Basically, this sports a hard limit and the assignment of cards per Ability Rank can easily be modified to suit the host’s specific campaign. As you may have noted, this option greatly diminishes the influence of luck on Feats, and as such is suitable for campaigns that attempt to depict a harder or more down-to-earth (haha!) game. The second hard limit variation is a bit more lenient – oh, and it should be noted that these variations are explicitly tested for use with core-book only and for use with Comme il faut.

If you prefer another variation (or want to combine them for further limitations), the pdf sports the Half-Off Variation: Basically, cards of an improper Suit are worth half their face value, rounded down. The second such option here instead uses the color of the Suits to determine whether or not to halve the face value: If the suit as the same color of the one that is required, they are worth halve value; if they sport the wrong color, they instead only have a value of 1. Big kudos: The variation sports notes on conjunction with Tarot Variations – kudos! This one makes dud-hands less likely and can potentially be used to make things a bit easier for the dramatic characters.

Next up would be the Ability Harmonics Option: These apply a spell-harmonics like tweak to the Half-Off variation. When characters attempt a Feat, the host chooses a Suit or more that may alter the results of the Feat. If that sounds complicated, rest assured that 3 examples per Suit are provided to illustrate the consequences of using the harmonics option. Once more, compatibility with core and Comme il faut’s optional rules is maintained.

Okay, after that, we have the Dwarfish Requirement Variation, which expands the levels of Requirement of Feats from 6 to 13. Guidance is provided to choose difficulty; the new Requirements are properly defined and a handy table illustrates them at one glance. Big plus: If you want even more such levels, the table does actually contain entries for the values between the labeled ones. Kudos! Speaking of which: We get a reprint of degrees of success for our convenience, rendering the use of this section comfortable and neat.

But we don’t have an idea which task would be best assigned to which Ability, right? Examples for Requirements are helpful and the pdf knows it – hence, the pdf covers ALL Abilities in detail, listing examples for each of the 7 new Requirement Levels. Yes, including all the new abilities in supplemental books out there. Now that’s what I’d call considerate! And yes, compatibility with core and Comme il faut’s optional rules is maintained here as well.

Editing and formatting are top-notch, I noticed no issues in the formal criteria or rules-language. Layout adheres to Fat Goblin Games’ elegant 2-column full-color standard. The artworks are thematically-fitting public domain b/w-pieces. The pdf comes fully bookmarked for your convenience.

Mister J Gray delivers once more (seriously, if there’s a new version of CF planned at one point, let this man work on it!): The variant rules herein allow for meaningful, great modifications of the Castle Falkenstein engine. The variations explain their impact, which is helpful for less crunch-savvy hosts. Their modularity and potential for combination with other options and each other ensures that this humble pdf should be considered to be a great change of pace for pretty much every host that is not 100% happy with the base-rules. If you’re looking for meaningful variations to change your game and tricks to give your game a different feeling/theme, then this is pretty much required. Indeed, from simple and more down to earth to more modularity, this offers something for all tastes. Highly recommended at 5 stars + seal of approval!

You can get these great variations here on OBS!