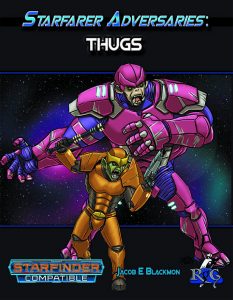 This installment of the Starfarer Adversaries-series clock in at 7 pages, 1 page front cover, 1 page editorial, 1 page SRD, 1 page advertisement, leaving us with 3 pages of content, so let’s take a look!

As always with these pdfs, we do get a neat one-page full-color rendition of the cover artwork, which makes for a nice handout. Beyond that, we also receive not one, not two, but 6 different statblocks in this pdf – CR 1, CR 2 and CR 4 are based on regular orcs, while CR 3, CR 6 and CR 9 are heavy thug statblocks, based on ogres.

Let’s start with the orc-builds, shall we? They use the soldier class graft and have the adjustments applied properly, and use the blitz fighting style – yes, rapid response has been properly implemented, and, as a courtesy to the GM, even been listed. Much to my pleasant surprise, the CR 1 version has a small and neat, but not overbearing ability that nets a bonus to attacks when attacking in conjunction with allies within 5 ft. Similarly, the CR 2 thug has a reduced base speed due to armor, but lists base speed as well – it’s a small thing and technically not required by SFRPG, but I enjoyed seeing that. Melee striker has been properly implemented for the CR 2 version. CR 4 is similarly built in a solid manner.

The ogre-based heavy thug builds don’t use a class graft, and instead elect to provide an ability that makes their slams count as non-archaic and armed, in line with tradition. The CR 6 and 9 builds add wyrmling glands to their arsenal. It should be noted that the DCs for these don’t use the standard ability DC here, and instead use the gland’s default calculation, which makes them come up, DC-wise, at +2 higher than when based on the default values. Checking the overall damage output versus Starfinder conventions, this still has them in line with everything. No complaints on my part, save that there are a few VERY minor formatting deviations, like a slash as a break before critical effects of weapons. These are cosmetic, though.

Editing and formatting are very good on a formal and rules-language level. Layout adheres to the series’ two-column full-color standard, and the pdf has no bookmarks, but needs none at this length. The handout-style rendition of the cover artwork is appreciated.

Jacob Blackmon’s cadre of unpretentious thugs made me expect a rather boring cast of NPCs, but I’ve been pleasantly-surprised by this one. Within the limited frame available, this has delivered a rather nice array of adversaries for a more than fair price-point. My final verdict will clock in at 4.5 stars, rounded up for the purpose of this platform. Recommended if you need some rank-and-file goons and don’t want to waste your time statting those!

You can get these thugs here on OBS!

Enjoying my reviews? If you do, please contemplate supporting my patreon! Every little bit helps!