The Mists of Akuma Primer (5e)

The Mists of Akuma Primer (5e) 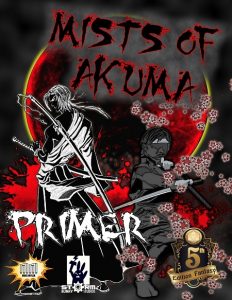 This primer for Mike Myler’s Mists of Akuma-setting clocks in at 14 pages, 1 page front cover, 1 page editorial, 1 page SRD, 1 page sales-pitch for the kickstarter – so what do we get in here?

Okay, this is pitched as eastern fantasy noir steampunk for 5th edition – basically what would happen if you took the eagerly anticipated Steampunk Musha and infused a hefty dose of Ravenloft with more emphasis on the fantastic. After a brief page of introductory prose, we get the one component that may alone very much justify downloading this primer: The Mists of Akuma. These would basically be a variant of the mists of Ravenloft crossed with Rokugan’s Shadowlands – essentially, they require a Dignity saving throw (DC 8 + 1 per previous save in the last minute) and, on a failure, increase your haitoku attribute. Much like fatigue, the effects of these mists come in multiple levels, 8 to be precise, but they do feature some severe…changes. What begins with hallucinations quickly turns to include mutations and later, death and transformation into an Oni!

The pdf also introduces a new attribute – Haitoku, which can be considered to be the fall from dignity, or the corruption of the character. The most approximate translation, if my rusty and rather rudimentary Japanese doesn’t deceive me, would be “immorality”. This attribute can be raised by roleplaying and actions and one can draw upon it to act while unconscious, resist madness and accomplish similar feats. 3 sample feats based on haitoku are provided, showcasing how the corruption interacts with dignity et al. On an aesthetic point – Prerequisites of attributes in 5e usually sport “attribute required or higher”, not just the attribute required line, but that is, admittedly, a cosmetic gripe.

4 new character backgrounds, all with flavorful features can be found – interesting: Background influences Haitoku as well as Dignity. The pdf also sports a variety of human subraces, two variants of shikome and two types of tanuki. On a nitpicky side, the rules-language, while generally precise, is a bit internally inconsistent, sometimes using “your Strength score increases”, while other times stating “Your Strength increases…” – again, a cosmetic gripe…but I figured I’ll point it out for the final book’s benefit anyways. Paladins may select the samurai sacred oath and Warlocks the Wu-Jen pact…and this is where the pdf already ends.

Editing and formatting are pretty good, but not yet perfect – seeing that this is free and that generally, it can be considered well-made, no complaints. Layout adheres to a two-column full-color standard with public domain art. The pdf sports a nice map of the lands by Michael McCarthy and comes fully bookmarked for your convenience.

Okay, I have to once again harp on that one: This is no primer. This is a sample – while this is a small book that highlights components of Akuma, I don’t really know that much about the setting after reading this book. I know that some races exist, some obvious traditional class options exist and that haitoku is an (awesome!) thing and that the mist rules are sufficiently cool to make me excited about this project. But it’s not “introductory”. I know there are a bunch of cool components to scavenge here; I certainly like what’s implied – e.g. that augmentations can affect dignity, the blending of steampunk and noir aesthetics – I like just about all I see…or I think I do. Because, honestly, I have a hard time putting the pieces presented herein together. So no, I don’t consider this a primer. However, I consider it a great teaser for Mists of Akuma – and one that certainly has a lot of scavenging potential! Being FREE doesn’t hurt either, which ultimately makes me settle on a final score of 5 stars for what’s in here as opposed to what’s not in here. Take a look at this scavenge and take a gander – chances are, you’ll find something intriguing.

You can get this FREE primer here on OBS and here on d20pfsrd.com’s shop!

Like what you read/see? The kickstarter has 11 days to go and can be found here!
Endzeitgeist out.