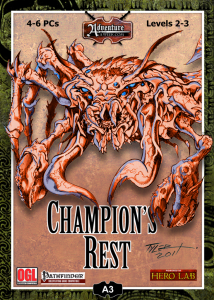 This pdfof the revised edition is 45 pages long, 1 page front cover, 1 page editorial, 2 pages of SRD, leaving 35 ages of content, so let’s check this out!

This being an adventure-review, the following contains SPOILERS, so potential players may wish to jump to the conclusion.

Still here? All right! The PCs are still in the very cool frontier-town of Rybalka, at the edge of a clash of civilizations between the Klavek Kingdom and the Vikmordere barbarians/vikings. The latter seem to have recently completed a ritual at some burial mounds and the troops sent there to slay the barbarians have not reported back – it’s up to the PCs to travel there, slay the Vikmordere and rescue any survivors. Or so is the briefing in the gorgeously mapped city hall, which gets not only an isometric map, but also a top-down one – awesome!) – on their way to the mound, the PCs encounter a hut (perhaps known from “Devil in Dark Wood”) and its inhabitant, legendary Cual Beartooth. The barbarian should prove to be their savoir, for they are beset by a for beyond their capabilities -a devilish Kyton seeks to slay them and their escort. With the aid of the veteran warrior, they may succeed in vanquishing the dread creature and also learn of the cool salves the barbarian can brew to facilitate survival in the hostile woods. Both Cual and their escort may provide different facets of the background story and could also be used to display the clash of cultures between the Vikmordere and the Klavekians – his hut is a kind of neutral ground, after all. Inside, they find a survivor of the massacre at the burial mound, unfortunately for now, unable to communicate what exactly has happened.

Once the PCs reach the burial mound, they’re in for a treat – a detailed, beautiful one-page map, containing a drawing of totem poles, funerary flags, a drawing of the entry, an example picture of stacking caskets etc. This page is AWESOME, as the drawings drive home the differences in cultures and serve as a nice introduction to the burial mound of Loi’Tok. Better yet, we actually get now a hand-drawn, beautiful side-view version of the map that details the whole complex and makes it easier to envision. Also, at the mound, the PCs now have a chance to negotiate with the Vikmordere, who will arrive at the mound some time after the PCs as an added dynamic force. Inside the burial mound (which comes with even more neat pencil-drawings to illustrate its exact layout, the PCs can find an altar containing a secret mechanism to open a hidden door, including a riddle which now in the revised edition has multiple ways of being solved – neat!

If the PCs prevail, they may find the tomb of 8 legendary lords and even open their respective sarcophagi – if they succeed at another puzzle. Again, though, no guide-line or clue is presented to help the PCs figure out the correct solution, though the procedure per se is not too complex. If they fail, however, they will have to brave the undead lord in question, skeletal champions that may give them a run for their money – especially if the tougher of the two statblock options is chosen, wise PCs should run – or face a TPK. No one said trespassing in crypts was safe! There’s also a neat little tie-in here with “Crypt of the Sun Lord” – bearer of his blade have it easier here. Furthermore, the revised edition now comes with yet another beautiful map to help precisely portray this puzzle and hand-out to the players – two thumbs up!

After checking out and potentially looting/desecrating the tombs, we return to the task at hand – finding out what happened to the lost patrol. Unfortunately, at this time (or earlier) a squad of Vikmodere may enter the tomb as well – to look for their missing comrades. For the true culprit beyond the massacre here belongs to neither ethnicity: A crab-like beast with paralytic tentacles called Kra’Tah makes its lair in the mound, guarded by swarms of POISONOUS FIREFLIES. AWESOME! In the hand of a good DM, with good timing, this revelation may come as an interesting surprise and even provide an angle for a non-combat oriented resolution with the Vikmordere, though that’s not per se presumed by the module. And yes, I consider both this boss beast (which may act sooner, depending on the stealth of the PCs) and the fireflies to be good ideas. If the PCs do a really good job, they may even unearth a sacred pendant of as of yet unknown powers. Upon their return to the hut of Crual and their rendez-vous with the Klavekian soldier there, the module ends.

Editing and formatting are very good, apart from very minor glitches, nothing detracted from the quality of writing or the crunch. Layout adheres to Adventureaweek.com’s 2-column full-color standard and provide boxes with icons to show e.g. read-aloud text, denote traps, skill-checks etc. The revised edition has a printer-friendly white background – nice! The pdf comes with extensive bookmarks. As with other modules by adventureaweek.com, the cartography is STUNNING and the added maps greatly enhance the unique and cool location with their detailed images serving to greatly enhance the flavor of the unique civilizations presented in the modules. Indeed, a sense of ancient roots suffuses the module and serves to evoke the classic feeling of exploring strange and unfathomable places.

The slow development of the clash of cultures starts to build up and I’m looking forward to seeing where it’s going. The writing is of consistently high quality and at least one monster had me grin my evil DM-grin, which is awesome. This is a revision after my tastes – more content, more maps, streamlined puzzles – I actually REALLY enjoyed this straight-forward dungeon-crawl that actually comes with a nice story – not a revolutionary one, but there’s a good reason for the PCs to explore the complex and some nice setting of the stage for the things to come with the secret amulet the PCs can find and the promise that they will return to this place.

The module admittedly isn’t that long or complex, but it doesn’t have to be – it’s a dungeon crawl that takes place in a thoroughly intriguing complex that oozes cultural knowledge and makes you actually feel like you’re venturing into the territory of a culture both familiar and alien. The added maps and streamlined puzzles also enhanced this module’s appeal further and while editing is not perfect, it remains essentially my only (very minor) remaining gripe with the module. Hence I’ll upgrade my final verdict to 4.5 stars for the revised edition, rounded up for the purpose of this platform.

You can get this enhanced, improved, revised edition here on OBS and here on d20pfsrd.com’s shop!