Heroes of the East III 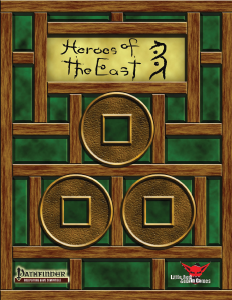 After a short introduction on what to expect, we immediately kick off with the first supplemental base-class found herein, the Yamabushi (which is unfortunately named just like a certain already existing class by Zombie Sky Press). Unlike ZSP’s take on a transmutation-only caster, LRGG’s Yamabushi is rather martially-inclined, gaining d10, 2+Int skills per level, proficiency with light and medium armor as well as simple and monk weapons and e.g. katana and naginata, full BAB-progression and good fort- and will-saves. They also learn to cast spells of up to fourth level from teh ranger-list via wis and gain a slight scaling AC-bonus when unencumbered and unarmed equal to wis-bonus plus 1, scaling up to +5 at 2oth level. Oni, chaotic outsiders and dragons are foes of the Yamabushi and thus take extra damage from their attacks: Yamabushi get their wis-mod to damage and add twice the amount to attacks versus the aforementioned creatures, though thankfully capping the maximum amount of bonus damage possible by level, thus preventing abuse. Yamabushi also get a samurai’s resolve pool (nice!), may speak to an area’s kami and finally capstone with true enlightenment. Overall a solid class – I like the synergy with the samurai’s resolve pool – but honestly, I would have preferred the class to be a tad bit less linear – there’s not much to do with regards to choices and I would have loved to see more options for players to diversify Yamabushi-experiences there. Still, nothing particularly wrong here.

The second new class would be the Shinshoku, who gets d8, 2+Int skills per level, proficiency with simple weapons and light armor, 1/2 BAB-progression, good will-saves and full spellcasting – of an unconventional nature. The Shinshoku blurs the borders between prepared and spontaneous casting : While casting via charisma, the maximum amount of spells available per day is more akin to that of the wizard and the class gets a kami companion – who has to vanish to the spirit world, retrieve the spell and impart it to the Shinshoku – including a set amount of time it takes to retrieve the spell. The Shinshoku draws his/her spells from both the cleric and sorc/wiz spell-lists, casting either as divine spells. While their limited proficiencies impede their tanking capability, that measn armored casting is only one feat away – and that’s bad. What’s worse is that as far as I#ve understood it, ALL SPELLS IMMEDIATELY BECOME AVAILABLE. Yes. You may postpone preparing spells, send off your Kami and retrieve ANY SPELL. That’s intrinsically better than either sorc/wiz OR cle/orc. AND the Kami and its damage potential also come into play. Yes, the retrieved spell only remains class level hours in the memory of the Shinshoku, but still – the added versatility makes this less of a drawback than it should. They can’t truly die as long as a focus object is intact and even that one can be repaired. I assume roleplaying with the Kami is in some way supposed to restrict what spells are available, but as written, the class is HORRIBLY BROKEN. The spells NEED desperately an additional and much more restrictive limitation – perhaps by only sticking in the mind for 10 minutes per class level or the capability to only have one spell (or only class level spell-levels) in their memory- something severe to offset the massive superiority in versatility over sorc, wiz, cle and orc as well as the companion -especially since the class gets to choose from kami-affinities that further reduce the time retrieving spells takes. This class is a great idea, but one that requires fixing – which could be easily done and make this actually work well…

After these base classes, we go on to some new archetypes: The warbound yamabushi loses spellcasting and ac-bonus, but gets d10 and heavy armor proficiency. Wait. What? They already HAVE d10!!! That’s just a sloppy basic mistake that makes me question whether the Yamabushi class is actually depicted as it was envisioned…

The Kuji-Kiri-Ninja is rather cool, learning to cast a limited amount of spontaneous spells from the sorc/wiz-spell-list via Cha, thus replacing their poison use and ninja tricks – nothing to complain here. Oniwaban ninja get 1/2 class levels as bonuses to bluff, disguise and sense motive and replace ninja tricks with essentially impersonation-based powers, essentially making unmasking the ninja extremely difficult – again, neat one!

The next archetype for the ninja would be the honorable shinobi, who gets weapon damage bonuses and count as fighter-levels at the cost of sneak attack and who may enhance their weapons via imbued ki. Iga Ninja are also interesting, losing sneak attack in favor of alchemist’s bombs and some discoveries – again, awesome!

Monks may now opt to take the Street Fighter archetype, who actually gets a grit pool instead of a ki pool – all focused on unarmed attacks and when fighting foes using styles, ranger combat style feats, weapon specialization etc. – which is imho an actually rather awesome idea – the overall archetype is iconic, cool and well-crafted. Two thumbs up!

The Onna-Bugeisha is a female samurai especially adept with the naginata, while Hwarang samurai get alternate weapon expertise and alternate skill lists as well as a ki pool and at higher levels, may wear bolstering, creepy make-up and gain evasion. Nice one! Korean traditions only rarely see any kind of rules-representation/coverage – so kudos for doing something distinct here!

Fighters may now opt to become Sikh warriors, who get no proficiency in heavy armors or martial weapons, instead getting their own weapon list -essentially this one is mostly fluff, though much like the Hwarang, it comes with a nice code. Barbarians may now become Khans (imho unfortunately-named – like calling a class a king or a general – Khan is a honorific!) – essentially mounted barbarians. Nothing too interesting going on there.

After that, we’re off to the 3 new 10-level PrCs, first of which would be the Dervish, who gets 4+Int skills per level, d10, full BAB-progression and medium ref-saves – essentially these guys are the heirs to 3rd edition’s Tempests – only for double weapons. Their abilities are focused on double weapons and they are a weapon specialist of the class, including bonus feats etc.

The second PrC is the Youxia, who gets full BAB-progression, 4+Int skills per level, d10 and medium fort- and ref-saves. They get a ki-pool (if they already don’t have one) and gain several defensive powers, making them e.g. superb bodyguards (Shield other) and may expend ki-points to increase his/her damage output.

The third would be the Wukong, who gets d8, medium ref- and will-saves -and lacks information on how many skills per level they get. Sloppy. Which is a pity, for per se the class is rather cool, allowing the Wukong to make his/her staff larger or transform into various forms akin to a druid’s wild-shape and make massive leaps.

After that one, we’re off to new style feats, kicking off with ninpo – which allows you to move yourself into an adjacent square still in range of an enemy missing you and later reposition foes as a result of being missed by said foe – as an immediate action as a kind of limit, though I would have preferred it also using up an AoO-attempt, but that’s just personal preference. Rather cool would be the option to, as a move action, move 5 foot from a designated enemy and vanish from their sight for one round. Rather iconic, though honestly, I would have required additional information on whether the enemy may retry a perception check upon his/her/its next turn to see you again. The other feats of the style allow you to gain non-stacking precision damage and gain some further bonuses for being missed.

The Southern Scorpion style nets you +10 ft movement rate as well as +2 to AC and for every enemy missing you, you get +2 to atk against them since the start of that foe’s turn. The other two feats of the style are even more powerful – one netting you an AoO every time a foe misses you (I assume still adhering to the limit per round, though the feat doesn’t specify) – but it fails to add in the caveat that only melee attacks provoke these AoOs. Otherwise, ranged attacks could also provoke AoOs. Beyond that, the third feat in the tree allows you to forego regular attacks for one attack at -4 to atk that auto-threatens a crit and deals double damage as well as imposing a -minus 1/2 dex-mod penalty to saves versus death effects and poisons. If you actually manage to confirm the crit, you deal 3x the damage. Something about this feat rubs me the wrong way – while not per se ridiculously overpowered, it feels like it falls on the strong side and is a tad bit too strong for my tastes – getting rid of the x3 modifier might remedy that, but still – a slightly sour taste remains.

Jyoti Kun Do is an interesting style in that it negates the benefits of weapon focus and weapon specialization (I also assume the greater versions, but the feat fails to specify them) and penalizes users of style feats using them against you. You may also later choose a feat a foe uses against you to not net your foe any benefits 1/combat per creature. Per se an awesome feat – but the rules-text is lacking – does e.g. the maximize spell metamagic feat count as a feat for the purpose of this feat? If so, is regular damage rolled instead of the maximum amount or is the user immune to the spell thus modified? A more tight wording can easily salvage this feat, though – so I’m hoping for a revision here. Oh, and yeah, we get an adept version of the One-Inch Punch, if you haven’t by now guessed the inspiration for the style…

We also get 6 new exotic weapons before diving into the magical item-section. Rather awesome is a Guan Dao of legendary weight that requires Str 18 and weighs a whopping 100 pounds, hearkening back to mythology – neat. We also get neat twin blades and bloodthirsty blades here – nice section.

Editing and formatting per se are very good on the formal basis, though there are multiple instances of basic rules-language editing having gone wrong. Layout adheres to a 2-column parchment-background standard with multiple original, nice full color artworks. The pdf is fully bookmarked for your convenience.

I really want to love this pdf – overall, its ideas and the respective executions work well and touch upon some genuinely neat concepts. In fact, while editing is better than in other LRGG-publications, I did encounter some glitches that are easily avoidable/corrected and they actually go so far as to impede my enjoyment of the pdf, featuring several instances of rules-language that needs to be more precise and the e.g. lacking skill-information is a massive detriment, as is the fact that one of the two base-classes is horribly broken and needs fixing. Which makes me angry -for I want to give this pdf the 4-5 stars the content would deserve, were it executed sans flaws. I really hope this pdf will be revised – as written, in spite of the great ideas, I can’t rate this higher than 3.5 stars – if you do not mind the issues I mentioned, I still encourage you to check this out.