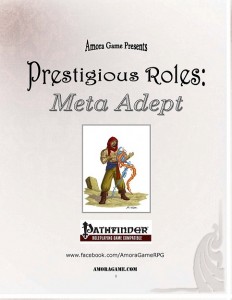 This installment of the Prestigious Roles-series is 5 pages long, 1 page front cover, 1 page editorial, 1 page SRD, leaving us with 2 pages of content, so let’s take a look!

This pdf contains, surprise, a prestige class – the Meta Adept, who is especially adept at using meta-magic. As a generic prestige class focused on metamagic, the entry-requirements are not that steep: 3rd level spells, 5 ranks in Knowledge (Arcane) or (Religion) and 5 ranks Spellcraft as well as two metamagic feats-  that very doable. The PrC gets d6, 2+Int skills per level, no new proficiencies, 1/2 BAB-progression, medium will-saves and full spellcasting progression.

But what can the class do? Well, it can have the metamagic modified spells count as the higher spell-level. Prepared spellcasters may swap metamagic feats of equal or lower spell-modifications, whereas spontaneous casters may now ignore the increased casting time of metamagic – rather powerful, that one! The Metamagic Adept may also gain some metamagic feats, of course.

The PrC may also recall spent metamagic-modified spells via concentration checks versus 10 + twice the spell level – on a failed check, the adept may suffer from the new mental fatigue condition (or the second new condition, mental exhaustion) – these two feature heavily in the other abilities of the adept – e.g. spontaneously adding a metamagic feat to a non metamagic-prepared spell is possible, but again, at the risk of mental fatigue. While limited per day, the lack of a modified benefit for spontaneous casters makes this ability imho less useful for spontaneous casters.

Where the PrC gets weird is with for example the Meta Consolidation ability – which allows you to use two of the metamagic feats at once without adding the modified levels – VERY powerful, even if it is limited to casting attribute modifier times per day. With this ability, prepared casters get a bit of a short end – they have to make their concentration checks when preparing, potentially losing spell slots and starting the adventuring day with the new negative conditions…

The capstone of the class allows the adept to convert a metamagic-powered spell into a blast that deals  damage and may fatigue foes – per se neat, but spontaneous casters can potentially blast foes to massive smithereens.

Editing and formatting are ok, I did notice some minor issues, though none that impeded my understanding of the PrC. Layout adheres to a 2-column standard with a nice piece of artwork, is printer-friendly and the pdf comes sans bookmarks, but needs none at this length.

I like the idea of this PrC – metamagic sucks and can use some update/option to make it viable. This PrC partially succeeds in the endeavor – but only partially. While reviewing this, I often found myself wondering whether this would not have been more prudent as two PrCs – one for spontaneous and one for prepared casters. As provided, some of the abilities just feel off balancing-wise with regards to one of the spellcasting types – essentially, imho, too much was crammed into one class, when two would have probably yielded the more precise results. The new conditions are actually cool – the issue, though, is that the pdf fails to specify which spells could get rid of them, if any – introducing conditions is a brute force way of designing, especially when fatigue and exhaustion already exist and a simple sentence à la “Can be treated as fatigue/exhaustion, stacks with physical fatigue/exhaustion” could make them work so much better  as they’d immediately be treatable by an array of spells/abilities and thus no longer inhabit a blind spot in main-stream rules- and what about dropping unconscious from over-exertion?

All in all, the Meta Adept to me feels clunky due to trying to cover both spontaneous and prepared casters in one PrC and not particularly elegant in its design – it works, but not as smooth as I would have liked. While there’s nothing UTTERLY broken about it, I’m wary about some of the abilities of this PrC and hence will settle for a final verdict of 3 stars.

You can get this PrC here on OBS and here on d20pfsrd.com’s shop!