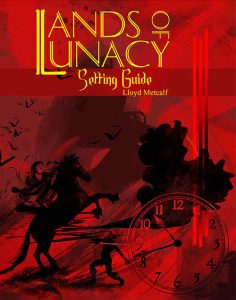 This supplement clocks in at roughly 27 pages if you take away editorial, ToC, etc. – why “roughly”? Page Zero contains an etymological definition of “Lunacy” that blends actual fact with some fantastic tidbits, and the final page has only approximately half a page of text, so it comes out at this page-count.

If the title wasn’t ample clue, this supplement does deal with madness to a degree and starts with a proper disclaimer. Personally, I consider it laudable, yet also a bit sad that nowadays, our elfgame-supplements, particularly ones like this, need such a disclaimer. To contextualize this: The supplement is probably as PG-13 as can be.  This is not a horror or dark fantasy supplement, it is thoroughly classic fantasy.

There is one more thing to mention: I own the softcover version of the OSR-iteration of this supplement, but not the pdf-version. I do, however, own the pdf-version of the 5e-iteration of the supplement, so I’m extrapolating the properties of softcover and pdf to the other respective edition, since in my experience it’s pretty rare to encounter significant deviations between such versions regarding formal properties. Should I err here, please do let me know and I’ll immediately rectify any errors made as a result of this assumption.

Okay, this out of the way, what is this booklet? I can summarize it in one sentence for grognards: It’s an application of the original pre-consistent setting Ravenloft concept, clothed in a fantasy context that hearkens closer to Planescape. If that didn’t means anything to you, let me explain: Ravenloft at one point was a “Halloween”-game; the mists would creep in, abduct the PCs, and they’d suddenly be faced with a horror module in these strange lands. These early sojourns often required the death of the master of the domain they found themselves in to escape. It took a ridiculous time until the authors realized that this killing off of the big baddies would ultimately hurt the integrity of the notion of a concise setting, thus transforming the setting. This also, of course, led to conflict, when suddenly PCs were supposed to act like…you know, mortals, instead of ridiculous superhero murder-hobos.

Lands of Lunacy is cognizant of this fact in an admirable manner – it doesn’t try to provide a meta-setting that intrudes into the campaign; instead, it embraces the sidetrek nature that was at the core of the original Ravenloft iteration. The notion is simple: Without a disruption, you can easily enter a sidetrek pretty much any time, any place. Need all players for a climactic battle, and the key-player for a story-twist is simply not here? Guess what, the mutability of the Lands of Lunacy may have the PCs transported there, adventure, and return – all in the blink of an eye, and all without breaking the immersion or established in-game logic. Theme-wise, the adjacency to Ravenloft is founded in the justification for the existence of these intrusive domains: There is the Chaos Void, overseen by entities called “drexol”, and from it, pocket-dimensions ceaselessly spawn. A ruling power (often an individual) stabilizes this, and there are those that hop from dimension to dimension. As such, in another nod towards Planescape, there is a slang-term for those not touched by the Lands of Lunacy – “banals.” Means of egress to the pocket dimensions are so-called Lunar Gates, which is a clever linguistic tie-in that generates a sense of underlying consistency by tying lunacy, as per its etymology, and the lands, together. Like the good ole’ Domain-borders, we do have barriers and boundaries.

There are also a couple of unique mechanical tweaks for adventurers traversing the Lands of Lunacy: On the more flavor-centric side of things, we have afflictions, which may vary from domain to domain, and include delusions of grandeur, thinking you’re a velociraptor, getting an imaginary friend or changing genders – these obviously are intended as roleplaying facilitators first. Two 15-entries-strong tables are included for arcane and divine magic, providing basically chaos magic effects for spellcasting based on a 2d10 roll. To nitpick: Why not go for the full 1d20 table here? Anyhow, the effects range from “Dr. Banner” (gaining Strength 18/00 [that’s ogre-level, for people who never played 1st edition]) to allowing all targets in the vicinity to cast a single magic missile at the utterance of a word, provided this happens within 1d4 turns. You could also end up wanting to eat insects. (As an aside – I can relate. Insect protein is not only healthy, it can be rather delicious, by I digress…) On a formal level, spell-references are not formatted properly here, and they also sometimes use the wrong names, which can be somewhat annoying – there is no Fae Fire spell in OSRIC; that’s supposed to be faerie fire. I am also not 100% sure what “Wraith Form” should be, but I assume some sort of incorporeity.

Now, the drexol as a monster is statted, coming in 4 age categories that range from infant to elder. These hidden masters can establish a link to those within their domains, slowly draining their XP and sanity. They also have a magic absorbing attack and a means to employ a mana burn AoE attack. Solid critter, though personally, I think I’ll rather use the concept for similar beings used in the Stonehell mega-dungeon and relegate the drexol to being the pawns of the hidden masters.

The supplement also presents a Sanity-engine: You have your Wisdom score sanity points, +3 per character level. Sanity points restore themselves at the same rate as hit points, provided you have a quiet and calm environment to rest. That is, unless your sanity points drop below 2, at which point, you suffer a temporary insanity. At a sanity score pf -1 to -8, you start getting an indeterminate lingering insanity, and getting rid of it no longer just happens – it needs calm, counseling, etc. and is predicated on saves. At -9 to -16 sanity, you instead suffer from permanent insanity. This may not be cured sans quests and the like; below that, starting at -17 sanity, the character is well and truly lost. Each of the 3 sanity-levels comes with a 10-entry-long table of sample suggestions for respective insanities, which, as befitting of OSR-gameplay, focus on the roleplaying aspects for the most part.

And that’s it as far as the core engine is concerned! The second part of this booklet is devoted to the module “A Witch’s Trial”, which is intended for 4-6 level 2 – 3 characters and can be seen as a kind of introductory module. Boxed read-aloud text is provided for the adventure, and difficulty-wise, it is dangerous, but not overtly so, sitting at a comfortable low to mid tier regarding what it demands of the players. The module does come with a nice, hand-drawn map of a complex, but unfortunately, no player-friendly iteration sans labels has been provided.

All right, only GMs around? Great! The PCs are cast into a domain that sprang up when a witch called Maggris was about to be executed by ignorant folks. The witch has since then managed to eke out a living, warding her hut, and that is good news for the PCs, for when they arrive, they are quickly assaulted by wolf-sized berserker rats – and endless tide, it seems, and worse, PCs start having a chance of incurring Lands of Lunacy afflictions. After a few rounds of combat, the witch opens the door and asks the PCs to escape inside – just in time, it turns out, as a horse-sized, rather deadly berserker rat come crashing forward. Really nice: The read-aloud text for these encounters does not replace nice descriptions regarding the approach to the hut.

Resting in Maggris’ well-warded house, however, will definitely afflict them with lunacy – but thankfully, the kind woman does have an idea where the answer to the plague of insanity scouring them may lie – an old wizard’s hold. She does offer an item to help the most stricken PC – the stone of order, which does fortify against the effects of the Lands of Lunacy. At one point, the witch had a relationship with the wizard that once laired there, and a long-dead cat, Mittens, hanging as a charm from her house, is actually the former familiar of the wizard – it brought the stone to Maggris.

The dungeon begins with a somewhat unfortunate first room, where plenty of marked Xs provide one of 8 different and pretty deadly effects. There is no better way to grind the playing experience to a horrid halt than to litter barely perceptible “cross an invisible line and take damage” pseudo-traps sans any kind of telegraphing at the start of a module. It’ll just result in paranoid players checking every damn square. Not fun. This is particularly jarring, for apart from this snafu, we have a classic magic mouth riddle, we have a surprisingly detailed library (with a book-title generator) and a subtle hazard, a greenhouse powered by magic (actually pretty neat!), and finally, the PCs may find the details about the old relationship and the drexol seeking to drive them insane. Defeating the entity allows the PCs to escape – and there may be a somber note, for leaving her stone of order  to the players – madness has seized her, and it’ll take the help of the PCs to get her out and back to sanity, but it is, at least, possible. I like this. It’s a chance for heroes to be, well, heroes. I also enjoy that, brevity notwithstanding, the complex actually isn’t strictly linear, which is definitely a plus.

Editing and formatting are good on a formal and rules-language level – while there are some deviations from formatting conventions to be found here, and while some snafus pertaining rules may also be found, as a whole, this is a solid offering. Layout adheres to a two-column b/w-standard, and the softcover booklet I own is a nice offering. The art, as pretty much always for Fail Squad Games, deserves special mentioning: Lloyd Metcalf’s original b/w-drawings are amazing and surprisingly plentiful within. The pdf-version of the 5e-iteration doesn’t have any bookmarks, which is a big comfort-no-go. As mentioned before, I only have the dead-tree version of the OSR-version, but I assume the same to be the case here. The cartography provided for the complex in the module is b/w and nice, but could have really used a player-friendly, unlabeled map.

Lloyd Metcalf’s “Lands of Lunacy” would be an example for the rarest of setting books, of roleplaying books: A booklet that doesn’t reinvent the wheels, and one that arguably doesn’t fare too well regarding its rules-integrity, but that still manages to remain inspiring – courtesy of the deliberate care that went into thinking about the concept. From the development of the etymology-angle to the way in which the surprisingly efficient cross-over idea between Ravenloft and Planescape has been implemented, this setting guide provides a nice tool for the GM’s arsenal, has its primary value situated in this elusive animal called “idea” – and for that, I like it more than I expected to. If anything, it’s probably not the relative brevity of the booklet, but the fact that it could have used some more tables and afflictions, more room on the setting guide side of things, that could have used improvement, at least as far as I’m concerned. Still, this is a supplement worth checking out. My final verdict will clock in at 4 stars.

You can get this cool little book here on OBS!

You can get the print version here in Fail Squad Games’ shop!