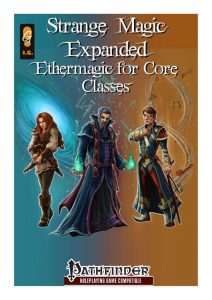 This little expansion for the amazing Strange Magic-tome clocks in at 7 pages, 1 page front cover, 1 page SRD, leaving us with 5 pages of content, so let’s take a look!

First things first: This is a stand-alone expansion for Strange Magic – it does not require the main book: 24 alteration and voidmeld manifestations are reproduced for your convenience within this pdf. (As a purely cosmetic grip – voidmeld manifestations don’t have a header, which could be slightly confusing for novices of ethermagic) – these reproduced pieces take btw. up 3 pages of the pdf.

Wizards get no less than three arcane schools: The Ether arcane school is associated with evocation and replaces force missile and elemental wall. Instead, it nets a power point pool equal to 1 + 1/5 class level, rounded down. As a standard action, you can expend power points equal to the spell level of a prepared evocation spell you have already cast; the spell is prepared again, as though it hadn’t been cast. The pool replenishes after rest. 8th level lets you, whenever you roll a natural 1 on an evocation damage die, you gain 1 temporary hit point. These last for 1 minute and stack with themselves, up to a maximum of twice Intelligence modifier and their duration refreshes when the ability is triggered again.

The second arcane school would be Gravity, associated with transmutation, replaces telekinetic fist and shape change. Instead, you gain borrowed time: As a swift action, you can grant yourself a move action, but you are staggered for 1 round at the beginning of your next turn. Big kudos: You can’t cheese the ability by being immune to the condition. The ability may be used 1/day + 1/day for every 6 wizard levels you have. 8th level yields gravity well, usable 3 + Intelligence modifier times per day. As a standard action, you can hurl gravity as a kind of splash weapon that deals untyped damage and staggers the target of a direct hit on a failed Fort-save. Slightly confusing at first glance: While the glob is hurled as though it is a thrown splash weapon, it is not – thus, no splash damage

The Madness arcane school, finally, is associated with Enchantment and replaces dazing touch and aura of despair. As a standard action, the wizard can confuse a creature within 30 ft. as a ranged touch attack for 1 round, usable 3 + Int times per day. At 8th level, we get a really potent, if unreliable ability – targets of your enchantments are confused for 1 round – no save. While both are mind-affecting abilities, these are pretty potent. Still, being unreliable, this does make sense…though personally, I’d cap the number of targets confused by one spell.

Editing and formatting are very good, I noticed no significant hiccups. Layout adheres to Interjection Games’ elegant 2-column b/w-standard and the pdf comes with fitting swirly b/w-art. The pdf has no bookmarks, but needs none at this length.

Bradley Crouch’s latest expansion for ethermagic allows for an easy way to dabble in the flavor and basics of ethermagic, without requiring knowledge of the system – basically, this can be considered to be a kind of teaser of sorts and it does that job well. The new class options for the core classes herein are interesting and perform interesting rules-operations, highlighting the value of ethermagic concepts beyond their use within the system. For the low and fair asking price, this is definitely worth checking out, particularly if what you’re reading here sounds interesting to you.

From a design-perspective, it’s certainly nice to have some reference archetypes to gage power-levels for further modifications. All in all, this should be considered to be a solid, unpretentious pdf for those curious about the system and hesitant to take the plunge; it is not mind-blowing per se, but well-crafted and fun. This is, in my book, a good pdf I’d round down for, but its very low $1 asking price upgrades my final verdict of 4.5 stars – I will round up for the purpose of this platform.

You can get this extremely inexpensive pdf here on OBS!

You can get Strange Magic here on OBS!