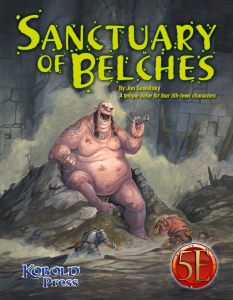 This module clocks in at 25 pages, 1 page front cover, 1 page editorial, 1 page SRD, 1 page advertisement, leaving us with 21 pages of content, so let’s take a look!

Okay, so first things first: This module makes use of Kobold Press’ excellent “Tome of Beasts”, using several creatures featured in that massive bestiary. However, it should be noted that the Tome is not required to run this module; all creatures featured get abbreviated statblocks with the respective ability-modifiers, speeds, short-hand traits, etc. – while these are not exactly nice to look at and pretty cramped, their inclusion constitutes a nice bonus for everyone who has not yet bough the massive tome. Kudos for being customer-friendly! As a minor complaint regarding presentation-sequence: The abbreviated flab-giant stats are included one encounter after they’re first encountered; not a true issue, but something to bear in mind, I guess.

While situated in the world of Midgard, the module can seamlessly be plugged into another fantasy world. The module takes place in the cold North, but similarly can relatively easily be reskinned for other climates, though two maps may need a recolor in such cases –it’s snowy in the North, after all!

All righty, only GMs around? Great! The proceedings take place near the isolated village of Olsha – where no one is getting any decent sleep due to the annoying sound of a horn, whose location has been identified as somewhere within the hills – eliminating the grating horn will be the quest for the adventurers and is probably something most people can empathize with – after all, who hasn’t lost sleep due to neighbors, cars, construction or worse in real life?

Further details point the adventurers to a subterranean complex, where a strange smell and belch-like sounds rumbled deep within. En route to the hills, the PCs will have to deal with yeti ridden by two fraughashar – upon defeating these foes (the encounter comes with a nice full-color map), the PCs may get mildly magical earmuffs that deafen them – a hint and taste of things to come…for the area in the vicinity of the complex is shrouded in a poisonous cloud that PCs with queasy stomachs will not appreciate…but they’ll also find the remains of a dead duergar, which hints at what has truly happened…and a parchment also yields first clues. Within the cloud of gas, the temple entrance has since been fortified by roving orcs – which are in the middle of fighting against duergar and their flab giants. Into this free-for-all massacre, both the PCs and two adventurers (lesbian lovers – nice bit of inclusion there!) stumble into the battle for a chaotic and rather fun proceeding…though the deafening, potentially grisly visions causing blare of the horn makes for an interesting complication.

After the battle has passed, the PCs will be finally be able to explore the complex, which has obviously been excavated by the duergar, a subterranean temple dedicated to the forgotten deity Youm. You see, the duergar have employed a mutant thursis giant who was “blessed” with acidic vomit during their excavations, but said giant has found the horn of Youm the most potent of 3 magical items devoted to Youm, including a potentially nasty, possessing tiara and particularly strong bonds. The horn, just fyi, is particularly potent in the hands of a bard.

The PCs are thus exploring the temple complex, potentially encountering the duergar commander possessed by the spark of Youm…and, with the duergar, they may actually find some unlikely allies, for the complex is littered with strange worms and the duergar basically just want out. So yes, while the basic set-up of this module is rather complex, the PCs will have ample opportunity to actually find out about the background story – big plus there. I also very much applaud the diverse use of skills and the means to decipher in some ways fragments of the strange worship of this ancient deity…

Ultimately, in order to end the infernal blaring of the horn, the PCs will have to enter the eponymous sanctuary, where Huppo the thursir mutant featured on the cover, awaits – his diet of strange rime worm grubs responsible for his deadly belches…and if the PCs have too easy a time, the avatar of the greatly-weakened Youm, an adult rime worm, makes for a second boss fight (or a second stage, if you prefer them to happen sequential). A big plus for me would be that the module sports a surprising amount of actual roleplaying opportunities – up to the point where proper roleplaying in the boss fight can yield a serious edge for the PCs!

Particularly helpful for quick preparation, for example in the context of a con: The appendix lists the story in handy bullet-points.

Editing and formatting are excellent, I noticed no serious hiccups. Layout adheres to Kobold Press’ excellent 2-column full-color standard. The pdf features drop-dead-gorgeous full-color artworks that deserve special mentioning. The full-color maps are similarly impressive, and while they lack a scale, I assume them to be the standard 5-ft.-squares. More disappointing would be that none of the maps come with a player-friendly version sans keys etc. – if you suck as much at map-drawing as I do or if you plan on using this via VTT, you’ll have a bit of work on your hand if you don’t want annoying numbers in your map.

Jon Sawatsky’s “Sanctuary of Belches” is a creative, action-packed module; from the environmental hazards to the general atmosphere evoked, this most assuredly makes for a fun dungeon. The boss fights in particular and the way in which the PCs can properly unearth the story (if they don’t just want to hack and slash through it, which is perfectly valid!) deserve applause. From the roleplaying opportunities to the terrain, this module makes for an all-around cool package that is only marred somewhat by the lack of player-friendly maps. With this remaining my one and only chief complaint, I can thankfully still gladly round up from my final verdict of 4.5 stars – a module well worth checking out!

You can get the Tome of Beasts here on OBS!