Book of Beasts: Monsters of the Forbidden Woods (5e)

Book of Beasts: Monsters of the Forbidden Woods (5e) 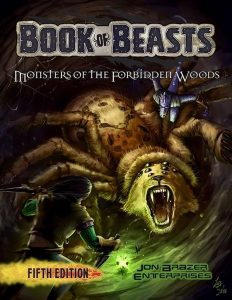 This little bestiary clocks in at 18 pages, 1 page front cover, 1 page editorial, 1 page advertisement, 1 page SRD, 1 page back cover, leaving us with 13 pages of content, so let’s take a look!

Okay, so the first thing you’ll notice herein would be that you get more than one statblock per creature: After a brief description, we also get a couple of paragraphs on the respective critter, contextualizing the foe with lore – I really enjoyed this decision, as one of the complaints I had against the monster-presentation of e.g. 3.5 and its derivatives, was that the glorious, often inspiring lore of previous editions completely fell by the wayside. So yeah – nice! Secondly, you should be aware that each of the creature-types herein gets a nice b/w-artwork that is kept deliberately to remind you of a sketch in e.g. an explorer’s handbook, with a sheet of paper making the drawing look like it was taken straight from an in-game artifact. This may just be a small layout decision, but considering the fair price-point, it is one that provides a significant increase regarding immersion. Speaking of which: Each entry also comes with in-character quotes that could be seen as further inspiration.

While I’m at it: We get advice for building a battle with the creatures, nomenclature, things to be found in its lair (or where the creature is encountered) and at least two interesting adventure hooks per critter. So yes, as far as supplemental material goes, this pretty much covers all bases. Big plus!

Now, let us take a closer look at the creatures themselves, shall we? The first creature would sound ridiculous when described, but the cool artwork actually manages to make the creature look badass – the addanc, which is basically a cross between a beaver and a crocodile, building dams and making for a deadly, semi-aquatic predator. Versions for challenge ¼, 2 and 5 are included – the statblocks, btw., are precise, and the multiattacking critters make for cool, fantastic critters.

The second creature type is actually more than just a variation of different iterations of one creature – instead, this pdf sports druidic guardians – each of which is radically different from the others: Tiny mushroom guardians come with false appearances, with incapacitating spore cloud clock in at challenge ¼. Stone guardians (challenge 1) can hurl rocks and sport a movement/gesture to bypass them – cool! The challenge 2 water hounds are elementals can squeeze to tight areas and the hounds may exhale waves of cold water in small cones. The challenge 3 vine protector sports multiple vine barbs, can conceal itself as vines and regenerates non-fire damage…and finally, the shrine stone, (challenge 4) is another sentry that can be deactivated once more with the proper sign – all in all, these guardians make for cool non-animal guards to make pagan/kinda-druidic adversaries to supplement such sites. Particularly the building the battle entry here provides some nice context for everything here -we also, btw., get 3 adventure hooks here..

We also take a look at giant animals, 4, to be precise. The dire owl (challenge ½) has a cool signature ability: 1/day vomiting a poisonous pellet at a foe. Oh, and their screeches are deafening. Neat! At challenge 1, monstrous rats have keen smell and diseased bites, as well as nasty claws. Oh, and pack tactics, obviously. The bloodboar is a challenge 2 foe with deadly charges that cause more damage and may knock foes prone. Oh, and once per rest-interval, the boar can recover from a deadly blow. Painful tusks and a 1/day squeal that rallies boars to attack (providing advantage on the next assault) complement a cool beast. The challenge 4 dire lion sports keen smell and pack tactics, pounce and yes, perform impressive leaps and execute several attacks. Slightly weird: The creature has a bite and claws and also a savage attack – the savage attack is not covered in multiattack, nor is it mentioned in pounce. Extrapolating from the presentation, I am pretty sure that the bonus action attack granted by knocking foes down with pounce should be the savage attack.

After this, we take a look at a deadly creature – the elemental known as a knaerk, a thing somewhat akin to granite, spider and hairless goblin blending into a nightmarish thing, these threats can burrow and earth glide, making the deadly ambush predators that can drop stones on foes – minor complaint: Losing the restrained condition requires a move action – a PFRPG-remnant. This glitch can be found in all 3 iterations of the knaerk (Challenge ¼, 3 and 6). The elder knaerk can also generate full-blown cave-ins, though the move action glitch can be found here as well. Another strange formatting peculiarity: The average damage values for the knaerk abilities are missing, even though the other monsters herein sport them.

The final category of critters made me think of classics in a good way: Spiderbears! Yeah, and you thought wolf-spiders were bad news, right? These critters not only sport pack tactics, spider climb and may move unimpeded through webbing, they also are strong – the smallest ones already clock in at Str 15! Adult and elder spiderbears gain webbing attacks (recharge 6 and 4 – 6, respectively) – cool: Not just, stat-wise, a duplicate of ettercap webbing…the nets are flammable. Spiderbears can also sense the location of beings in the net, have a poisonous bite. Minor complaint: The elder spiderbear’s skills are both off by 1: At challenge 7, the creature should already have a +3 proficiency bonus.

Editing and formatting, for the most part, are excellent on a formal level. On a rules-language level, the pdf is similarly well-crafted, though it does sport a few minor hiccups. Layout adheres to an elegant two-column full-color standard and the pdf’s b/w-artworks of the sketches are really neat. The pdf also comes fully bookmarked with detailed, nested bookmarks – nice!

Dale C. McCoy Jr.’s monsters herein are great – they are flavorful, yet feel somewhat grounded and, in lack of a better term, realistic. Plausible. The guardians, animals and fantastic monsters herein are nice, with the added information, hooks and quotes adding some nice narrative potential to all of the monsters, contextualizing them properly. While not 100% perfect, this is well worth checking out for the fair price point. My final verdict will clock in at 4 stars.

You can get this thematically concise, flavorful little bestiary here on OBS!