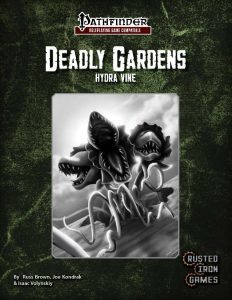 This installment of the Deadly Gardens-series clocks in at 5 pages, 1 page front cover, ½ page SRD, leaving us with 3.5 pages of content, so let’s take a look!

This installment’s magic item would be the vermin bait flask, which is a low-cost, sticky splash weapon that allows smart PCs to fool mindless vermin and/or use them for their advantage – cool, concise, two thumbs up! The pdf also contain 6 different natural items: Cyclops eye soup can auto-confirm the first critical threat after consumption; Gug wishbones can be broken – the one with the bigger piece gets a luck bonus for 24 hours. Moonflower blossom emit light and may be squashed for a blinding pulse…and they may force shapechanges from lycanthropes on failed saves.

Mothman powder nets +2 to Cha-based skill checks and to the DC of fascination-causing effects. Purple worm dye permanently dyes inorganic material and may only be removed with universal solvent (not properly italicized). Sard sap is hard to collect (spell reference in the text is not italicized, and formatting of magic item referenced is also incorrect)…and utterly ridiculous. It prevents death from negative hit points or negative levels for 24 hours. Functional immortality, if you cover insta-death bases. Utterly broken at 5K price. Utterly broken, even as a super high-powered item. Kill it with fire.

The central focus of the pdf would, however, be the lavishly-illustrated hydra-vine, which clocks in at a mighty CR 15. These critters entangle those within reach and whenever they take slashing damage, is gains growth points and heals…oh, and the plant knocks missiles out of the air – 50% miss chance. What’s the unique thing about it? Well, beyond aforementioned reactive regeneration, swallowing foes nets growth points – and upon gaining 5 of these, the plant gains the giant creature simple template – statistics for Huge, Gargantuan and Colossal size are also provided, which is pretty amazing! After 24 hours in a size greater than Large, the vine splits in two, decreasing both offspring plant sizes by one step…yes, you can have a plague of these plant juggernauts on your hand rather quickly! The creature is evocative and cool…though it should be noted that the statblock does sport some hiccups – these don’t compromise the coolness of the critter unduly, but yeah – if you’re picky about that kind of thing, it’s something to note.

Editing and formatting are okay – there are a couple of avoidable formatting hiccups and a few components interact with rules-integrity a bit. Layout adheres to the two-column standard of the series and the b/w-artworks are nice, particularly for the low price-point.

Russ Brown, Joe Kondrak and Isaac Volynskiy deliver a per se nice little supplement, that has some cool components, but also some rough edges – the critter’s stats could have used a second pair of eyes, particularly considering how cool it is. The magic item is neat, but the sard sap needs to die in a fiery blaze – pretty much the epitome of unbalanced BS. This item and the minor formal hiccups drag slightly down an installment I otherwise rather enjoyed. My final verdict will clock in at 3.5 stars, rounded down for the purpose of this platform.

You can get this inexpensive pdf here on OBS.