A Necromancer’s Grimoire: Mysteries of the Oracle 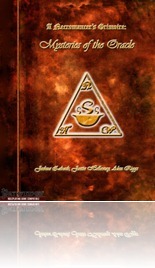 This pdf from Necromancers of the Northwestis 24 pages long, 1 page front cover, 1 page editorial, 1 page advertisement, 1 page SRD and 1 page back cover, leaving 19 pages of content, so let’s check this out!

After a couple of pages in which an oracle is added to an adventure-party seeking help, we are introduced to new oracle curses, 10 to be precise. The new curses herein range from mediocre annoyances like having to make a DC 5+spell level concentration check to cast spells, but not losing the slot or components on a failure to massive (counting as smaller for CMB/CMD, -2 to all physical attributes for an increasing bonus to all mental ones) and feel at least to me, partially odd in their balancing. I’m not a fan of “minor annoyance”-curses and the bonuses granted for the curses herein always feel like they surpass the drawbacks and impediments provided by the curses or vice versa. -4 against mind-influencing effects and not being able to become immune against them in exchange for +2+1/2 class level on sense motive as well as the option to later permanently see invisible things an even gain arcane sight and true seeing feels off to me, as does losing 1 paltry HP per level for a fast immunity against poison, diseases and gaining no old age penalties.

The pdf also presents the True-Cursed Oracle, an archetype that essentially amps up the regular oracle-curses for more revelations and 3 bonus spells. A kind of extreme-oracle, if you will. I actually enjoy this one, as e.g. playing an oracle with only half land speed that is unable to run should provide a neat challenge.

5 new mysteries are included in the deal: The Dreams-mystery is rather interesting in its basic premise and enables you to learn information while asleep and even cast while sleeping via the somnomancy revelation. The latter, unfortunately is restricted to a range of 30 ft., essentially making it mostly useless, but the ideas per se are ok. The same could be said about the fortune oracle, which is a ll about not dying and gaining rerolls/forcing bad fortune upon foes. While mechanically not bad, overall I considered the mystery to be unimaginative. Which brings me to the Pestilence and Serpent mysteries. Pestilence is the third such-themed version I’ve read and unfortunately, Open Design’s Divine Favor: The Oracle features a much more compelling take on disease and pestilence than this pdf. The same holds true for the trite and boring serpent mystery. The Sun and Moon mystery on the other hand, while nothing too exciting, does some interesting things: Taking on the duality of both, many of its revelations are centered on sun/moonlight or both, which makes for an interesting mechanic. Unfortunately, though, not too much is done with it.

14 new feats are up next and once again are completely off with regards to balance: There’s a feat that lets your magic utterly ignore the incorporeal nature of foes and the associated miss chance. Another one forces incorporeal foes to attack you not against your touch attack AC, but against your regular AC. Seeing the BAB /fighting capabilities of most incorporeal undead and I weep for all those poor ghosts. There is also a feat to take a revelation from a mystery other than your own if it does not require 7th level+.

Finally, the pdf reprints the Oracle of Delphi archetype, one of the few good parts of the otherwise rather terrible “Ancient Warriors: Sons of Sparta”.

Editing and formatting are top-notch, I didn’t notice any glitches. Layout adheres to NNW’s 2-column standard with the used-parchment look and artwork is CGI-stock. The pdf comes both with bookmarks and a printer-friendly version. Oh boy. This pdf is just…off. There are some good ideas contained in these pages, but somehow, the balance of curses and benefits seems off. The True-Cursed Oracle has potential galore and could have been made much more complex and expanded upon and is a glimmer of awesomeness. And then, stoked up as I was, I read the mysteries…and encountered trite cliché after trite cliché. The disease-oracle has now been done 3 times and two times, this one including, badly. The two mysteries that bring some interesting ideas to the table, dreams and Sun & Moon, somehow half-@ss their respective concepts. The Serpent-mystery is boring. And the Fortune-mystery…well, don’t get me started. Don’t get me started on balance between the mysteries either – the fortune mystery, for example is vastly more powerful than the disease mystery etc. pp.

The new feats are nothing to write home about either and unfortunately are examples of the Necromancers cranking out feats without concern for potential abuse/relative strength when compared to others. And then we get a reprint of an archetype that has been included in another pdf, which per se is nice, but takes two more pages away from the overall page-count. This pdf has me singularly angry, not only because it failed to do its homework with regards to what’s already out there, but because it is clear the authors CAN do what they set out to do – the manic-depressive curse, for example, ranks among my favorite oracle-curses around. Instead, a significant portion of the pdf feels like the least imaginative, boring, tried and trite concepts have been taken, solid, but again, not too interesting rules slapped on them and then put out. The low price is one of the saving graces of this pdf, but nevertheless, I consider Open Design’s Divine Favor: Oracle to be the vastly superior book. With the lack of imagination and the massive balancing concerns I have with this pdf, I’ll settle for a final verdict of 1.5 stars – some good parts can be scavenged, though. I’ll round down for the purpose of this platform. If you want to support NNW, buy Advanced Arcana I and II instead – they are worth every cent tenfold. This is not.

A Necromancer’s Grimoire: Mysteries of the Oracle is available from: