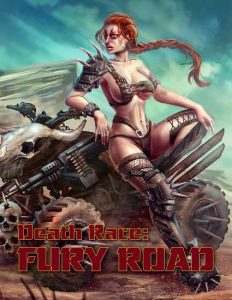 So, what is this? Well, it’s an unrepentant love-letter to the eponymous Mad Max-movie: The planet’s Chog-dath Major, wrecked by mega-corporations, then taken over by the wizard collective – and this blend of the fantastic and scifi pretty much means that this is, indeed, intended to be used in conjunction with either the Crimson Dragon Slayer or Alpha Blue games – as long as the game sports the VSD6-engine, you’ll be good to go.

There are 12 reasons to participate in a death race and the pdf does come with simple rules for betting on a death race: Betting on the correct winner nets 3 x the waged amount, 1st or 2nd place nets you twice the amount and betting correctly on someone scoring either 1st, 2nd or 3rd place nets you half the amount wagered. 12 alternate wagers are included, with 6 sample wagered goods range from gold to magic items.

So, how does the death race work? A player is picked to go first, he rolls a d%, then it’s the next player’s turn, etc. – races range from 3 such rolls to 7 in length. Weird, from a didactic point of view: Traps and ambushes are depicted before the race base mechanics: Picking up a weapon on the round nets +1 on a d4 table. Every time one is attacked by an opponent with a weapon, there’s a 2 in 6 chance it may be taken from them. An ambush has a 1 in 4 chance of killing the ambusher. A success (4) equals a success and requires a saving throw – if you don’t use your game’s default chart, you may roll on one at the back of the pdf: d4, 1 = death, 2 = out and at 0 health, 3 = lose half health (and further rolls of 3 force you to reroll for either 1 or 2 and 4 = escaping unscathed. A 5 on the ambush table ( 4 + weapon’s bonus +1) nets a no-save instant-kill.

Yeah, death races are, surprise, deadly. S, how are winners determined? You roll a d20 at the end of the race. The result is the place the character scores. So skill or the like…has absolutely nothing to do with placement. Which is patently unrewarding. More feasible and fun would be the scoring system: Surviving encounters, having sex while racing (remember, Alpha Blue tie-in…but if you do, you have disadvantage on the placement d20-roll), killing foes – all net points, while being knocked unconscious or destroying the planet net penalties. This may be combined with the placement system, but frankly, I wished it had been expanded further and/or replaced the lame d20-roll.

What’s not lame at all, though, would be the massive d100-table with, bingo, 100 entries long – it makes up the vast majority of the pdf and contains a wide variety of effects/things that happen: a rolled 1 here means that you’re vaporized, no save. You may also happen upon a Sam & Max Hit the Road reference and be captured by hillbillies, encounter buzzsaw vehicles…or you have unfortunately partaken in an energy-drink that nets you fast-acting ebola…and only a 1 in 4 chance of surviving it. 1 in 4 chances of not inadvertently ending in the Forbidden Zone, finding a Walther PPK…but there also are beneficial rolls: Having one’s favorite Heavy Metal song hit radio lets you ignore the next unfavorable roll (hey, happens rarely enough, right, my fellow metalheads?) and by driving through the right cloud, you may gain a mutation. You may be frozen solid by a Crimson Dragon, abducted by aliens…A LOT of the effects rolled here boil down to hilarious and very likely demises…so if you’re attached to your PC, newsflash, you probably shouldn’t have participated in a race that has “DEATH” in the name.

Editing and formatting are very good, I noticed no glaring glitches. Layout adheres to a nice two-column full-color standard and sports reddish veins. The pdf has amazing b/w-interior artwork to accompany the nice cover piece. The pdf comes in two-versions, with the second being more printer-friendly. The pdf comes with detailed, nested bookmarks for your convenience.

Andrew “Zakero” Moore and Venger As’Nas Satanis provide a cool little pdf, but you need to know what you’re getting into: This is, from a player-perspective, not the best simulator of a complex race – it is ridiculously lethal (even for Venger’s games, and that says something!) and the placement mechanics are really, really unrewarding. At the same time, if you’re looking for a hilariously over-the-top fun way of seeing your characters (or NPCs) perish in entertaining ways, then this delivers in SPADES. There is fun to be had here, for sure, and the table for race-events brims with creativity. I just wished the race’s actual mechanics would be on par with the creative events…and that there’d be more that influences the rolls. As written, a lot of the events really screw over the character (You’ve retroactively drunk lethal crap xyz…) and force unlikely survival rolls without much chances of influencing anything. This is cool for one-shots and quick-play/convention-gaming, but groups playing a prolonged campaign in VSD6-systems may want to look at this carefully before going for it.

That being said, this is FREE. It was written as a bonus for the Trinity of Awesome+1 book (where you can also find it in print as a fourth chapter) – and as such, it makes for a nice bonus. Not for every group, but if you’re looking for a Fury Road that’s truly and ludicrously over-the-top, then this delivers. Just replace those dumb, player-demoralizing placement rules. My final verdict, taking into account that this is FREE, will be 3.5 stars, rounded up for the purpose of this platform.

You can get this pdf for FREE here on OBS!

You can get the print book that contains this file here on OBS!