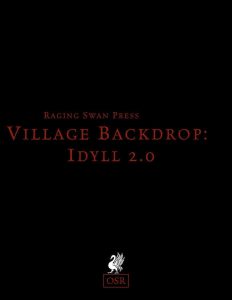 The OSR-version of the expanded 2.0-version of the supplement depicting the village of Idyll is 13 pages long, 1 page front cover, 2 pages of advertisement, 1 page editorial/ToC, 1 page SRD and 1 page back cover, leaving us with 7 pages of content, so let’s take a look at the settlement!

As always with Raging Swan Press’ critically-acclaimed Village Backdrop-series, we are introduced to a sample town herein, local nomenclature, market place-information on magic items for sale (which have been properly adjusted for old-school gaming’s decreased power-levels), some sample lore to be unearthed via roleplaying, as befitting of the OSR-version, and, obviously, some rumors and adventure hooks. Speaking of which: References to classes have been properly adjusted, and the same holds true for the surprising depth of skills and magic referenced in the village. Roleplaying acts as the substitute for skill checks where prudent, while others, like opening locks, have been properly adjusted as well. Kudos! Further relevant for OSR-games: It should be noted that Idyll is a bit more high-fantasy in theme than many of Raging Swan Press’ settlements, but not in a way that’ll break your game, immersion, of consistency of a more low-powered, gritty world.

The village has gained two new NPC-write-ups since its original iteration, both presented in Raging Swan Press’ tradition: I.e., we get no stats, but we do get read-aloud descriptions as well as notes on mannerisms, personality and background. One of these individuals also comes with their own adventure hook.

Mike Welham’s Idyll once again is a perfect reminder why he ranks among the authors who continue to score seals of approval – Idyll is an inspired, intriguing settlement that begins with a mystery and offers a great answer to it, one that makes sense on multiple levels. The potential for uncanny valley-esque creepy-factors is here, as is the option for players to later utilize the village’s unique properties for their own agendas… provided they dare and manage to come to an agreement with the village’s masters, that is.

Idyll 2.0 has been expanded and improved in careful and well-chosen ways that genuinely improve the ability to run the excellent settlement further. Moreover, the OSR-iteration has been carefully crafted and adapted, losing nothing of its great appeal. Idyll is novel, interesting and creative, warranting 5 stars + seal of approval. It’s one of the gems in the excellent series.

If you consider my reviews to be helpful, I’d appreciate a donation or joining my patreon if you can. Every bit helps.