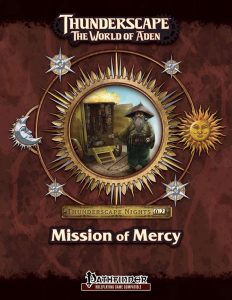 This adventure is intended for 2nd level characters. The module does feature read-aloud text.

Ramila Cythin, a 16-year-old girl, is dying due to the attack of nocturnals– she attempted to bring wares to the markets of Balaquim, and while she was saved, her heart has become damaged. Sending a letter to her dad, who has also been wounded, just while in Ulmari, he has one gambit – a mechanical heart that may save his daughter. Thus, the wounded man hires the PCs to get the heart for him and bring it to his daughter. The PCs will manage to find Razeem (fully statted), who turns out to be a black market dealer who tries to scam them for more money.

A steamboat towards Cyrir waiting, the PCs are off towards the girl – and en route, they will be attacked by corrupted young crocodiles. From there, they will need to hike towards the thunder train station (12 hours of forced march), including a battle with cacklers. As the PCs approach their destination, they are hounded by a large group of nocturnal. What kind? No idea, not described. Neither can the PCs take a stand. The read-aloud text railroads them towards the gates of the garrison, and on the train, a goreaux mechamage with metal golem minion and a jurak barbarian will try to rob the train. Both are fully statted and members of the golemoid pirate Horus Kithbane’s crew – is the heart tainted? This is a good place to note that the lack of maps hurts this adventure. The descriptions are not nearly detailed enough to properly portray the battle environments of the module, and this particularly shows on board of the train. We have no idea regarding its dimensions, NPCs there, anything – everything is an opaque blur.

Editing is tight in all regards, but formatting is not nearly as tight: Italicizations are missing left and right. Layout adheres to a nice two-column full-color standard and the sports a nice artwork that Aden fans will recognize. The pdf has no bookmarks, but doesn’t necessarily need them at this length. The pdf has no cartography or battle maps, which is a problem: Since the description is not exactly precise regarding combat environments, the battles feel opaque. As there are no maps, there also are no player-friendly maps.

This module by Shawn Carman and Ryan Boudwin is slightly better than the first Thunderscape Night…but not by much. Once more, there is 0 player agenda to be had; once more, there are no choices or consequences. The module implies that time is of the essence, but de factor, it doesn’t matter at all. The PCs have no hand in saving the girl, other than acting as couriers. The final encounter feels like it has been arbitrarily tacked in; the read aloud text forces the PCs to do things they wouldn’t do, when fighting with a garrison of NPCs would have been so much cooler. In short, this is a lackluster railroad. The concept is cool and the idea of a short journey is nice, but the opaque combat scenarios, coupled with the brevity, lack of consequences and comparably bland challenges, renders this, alas, not significantly better than the first one., My final verdict can’t exceed 2 stars.