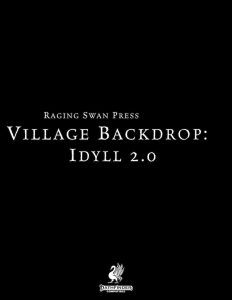 The expanded 2.0-version of the supplement depicting the village of Idyll is 13 pages long, 1 page front cover, 2 pages of advertisement, 1 page editorial/ToC, 1 page SRD and 1 page back cover, leaving us with 7 pages of content, so let’s take a look at the settlement!

As always with Raging Swan Press’ critically-acclaimed Village Backdrop-series, we are introduced to a sample town herein, local nomenclature, market place-information on magic items for sale, some sample lore to be unearthed via Diplomacy-checks and, obviously, some rumors and adventure hooks. Positive: Pathfinder 2nd edition’s more realistic economy, and the design-paradigms regarding degrees of success in research have been properly implemented in this context. Minor Nitpick: There is a formatting glitch in the lore section, with a lone bracket, but that’s cosmetic only.

On the plus-side of things, we have two new NPC-write-ups in Raging Swan Press’ tradition: I.e., we get no stats, but we do get read-aloud descriptions as well as notes on mannerisms, personality and background. One of these individuals also comes with their own adventure hook.

Mike Welham’s Idyll once again is a perfect reminder why he ranks among the authors who continue to score seals of approval – Idyll is an inspired, intriguing settlement that begins with a mystery and offers a great answer to it, one that makes sense on multiple levels. The potential for uncanny valley-esque creepy-factors is here, as is the option for players to later utilize the village’s unique properties for their own agendas… provided they dare and manage to come to an agreement with the village’s masters, that is. The Pathfinder 2nd edition iteration is a per se well-executed settlement; mechanically, it is a good conversion, though it is one that doesn’t make use of all peculiarities and cool options of the system: For example, there is a specific instance where an effect can be reversed; ideally, that’d imho warrant a ritual. Anyhow, the village is still a success indeed. 5 stars.

If you enjoy my reviews, consider leaving a donation, or joining my patreon if you can. Every bit helps.