EZG reviews Secrets of the Luckbringer 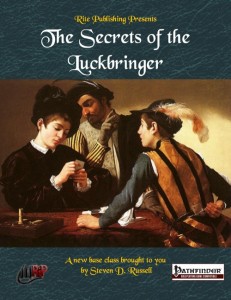 This pdf is 14 pages long, 1 page front cover, 1 page editorial, 1 page SRD and 2 pages advertisements, leaving 9 pages for the new base-class of the Luckbringer. Let’s check it out!

After a great IC-introduction to the new luckbringer-class (which ranks among the coolest and most amusing ones I’ve read by Rite Publishing), we are introduced to the new class. Mechanically, it’s a medium BAB, good ref and will-saves, d8, 6+Int modifier non-spellcasting class somewhere along the lines of Super Genius Games Time Thief in the manner that the class focuses on cool abilities that can be activated via free actions. The key difference, of course, being that the abilities center around luck (or lack thereof) rather than time. So, let me explain a bit further:

The base ability of the class is called moment of chance and can be used to get a save to avoid being dropped below 0 HP, add a bonus or penalty to checks or reroll one roll within 100 ft. The class gets 3+level points for this ability, ensuring that it gets additional uses every level. You think that is cool?

At second level and each even level after that, they get to choose a so-called Improbable ability from 11 different abilities. These abilities do use moment of chance points and range from becoming better at escaping, get benefits of critical feats, force miss chances upon enemies or negate them, take 20 if they normally couldn’t etc. It should be noted that almost all abilities can be used in favor of the luckbringer or to the detriment of opponents, necessitating fair scaling saving throws mostly dependent of level on Cha-mod of the luckbringer. If you’re like me, you do now get what archetype this class lends itself to. The coolest ability, by far, though, is Hazard (Su) : With this ability, the luckbringer can cause a damaging, improbable mishap to happen to an enemy, which is DAMN cool – both the player and the DM can each and every time determine specific, extremely improbable mishaps. This has to be one of the best abilities to encourage funny/cool ideas at the table ever.
Luckbringers get even more choices, though: Over the course of their 20 levels, they can choose up to 6 “Nothing is Written”-powers from a list of 10, which are not dependent on the pool and range from rolling twice a random roll and taking the better result, over evasion up to being extremely lucky when escaping/giving chase. Especially the latter is plain awesome for both PCs and NPCs. “You’ll NEVER catch me!” *cackles with glee*

Need more customization opportunities? The class has more to offer: Luckbringers also get to choose from up to 5 longshot powers from a list of 7, which range from a pool of freely usable bonuses per day over making botches crits and vice versa up to automatically getting an item via improbable means.

Beginning at 10th level, the list of Improbable abilities you get to choose from is expanded upon by 11 additional powers, some improving other abilities while others are brand-new, resulting in a highly customizable class.
The capstone ability is also great – the luckbringer summons a landslide, supercell-lightning-bolt or something alike on his enemy, causing 200 points damage. Nice and just as cool as Hazard.

Conclusion:
The pieces of b/w-artwork by Toby Gregory are nice, the public domain art also fits the theme. Layout adheres to the two-column classic RiP-standard. Formatting is top-notch. Editing was flawless up to the final two pages, where some minor errors have found their way into the book. The pdf is extensively book-marked, making electronic reference at the table easy. The IC-writing for which I love almost all RiP-products reaches a high point in this pdf, being among the most entertaining and yet cool, offering a nice gender-twisted touch to the traditional scoundrel myths and behaviors. Oh. That was it, wasn’t it? The bad “S”-word. Yep. I said it. Scoundrel. Like in “Complete Scoundrel.” Before you start to get reflexive headaches due to remembering how broken that book was, let me assure you: Luckbringer is NOTHING like Complete Scoundrel. Yes, it focuses on the players who want to play the perpetually lucky hero, but everything Complete Scoundrel did wrong, Secrets of the Luckbringer does right and the few things CS did ok, this pdf improves upon. BIG TIME. Mechanic-wise there nothing to complain about.

The IC-writing is glorious and even in the rules-section I really can only list one point of criticism: I encountered three minor editing glitches on the last 2 pages. While they did not really deter all too much from me understanding anything, they just jumped at me due to the more or less flawless nature of the rest of the pdf. I would have loved to see more powers, though there are enough to make them versatile indeed. Thus, my final conclusion will be as follows: If you don’t care about some minor editing glitches in an otherwise completely awesome, cheap class-book, this pdf is 5 stars. If you’re as pedantic as I am, consider it 4.5 stars, but still with the seal of approval. In any case, Steven D. Russell has once again created a great new class and the only question I’d like to ask is: When do we get more support for the luckbringer? I’d definitely love to see a sequel.