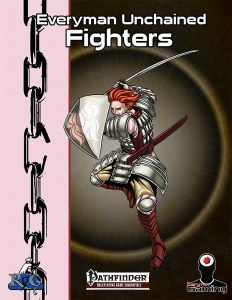 This re-design of the fighter-class clocks in at 46 pages, 1 page front cover, 1 page editorial, 1 page introduction/ToC, 3 pages of SRD, 2 pages of advertisement, leaving us with 38 pages of contents, so let’s take a look!

The fighter. Know what? the last vanilla fighter anyone played for non-testing purposes in my group…was in 3.0. The class has no unique selling points, only receives a ton of feats, lacks skills to excel beyond combat and is just BOOORING. Heck, one of my players tried to play a talented fighter and switched characters because, even with the talented flexibility, he considered the class too boring.

So let’s see if this redesign finally makes it work? The fighter remains a full BAB-class, gains all proficiencies (including tower shields and weapon group training), d10 HD, good Fort-saves…and 4 + Int skills per level. Thank the deities for the skills! 1st level and every even level thereafter nets a bonus feat, with 4th level and every 4 levels thereafter allowing the replacement of such a feat.

Wait…yep, the class thankfully has the stamina-mechanic of PFU completely integrated into its framework, with BAB + Con-mod denoting the pool-size and the regain conditions etc. all coming in Alexander Augunas’ trademark precision. 2nd level retains bravery, which increases every 4 levels thereafter – so if you’re like me and really like the Bravery feats by Rogue Genius Games, the respective base-line still exists. 3rd level provides second wind, which represents a swift action and stamina-expenditure based ability to gain temporary hit points – interesting here is that the cap of the temp hit points is oriented at the damage taken by the class, with higher levels (11th and 19th) also providing the options to do so at 11th and 19th level as a free/immediate action.

Starting at 4th level, the unchained fighter can use a move action to gain the benefits of a combat feat for 1 minute, at the cost of 3 stamina, providing some wild-card flexibility here. 5th level nets advanced weapon training, with 9th level and every 4 levels thereafter, one such option is gained. Originally featured in the Weapon Master’s Handbook, this basically represents the on-steroids-version of this: From new weapon groups to Ultimate Charisma-support, sharing teamwork feats, additional daily uses for limited use tricks, battle trance, a Dazzling Display that makes action-economy-wise sense, dual-wielding chosen weapon group weapons, finessing non-finesse weapons, stamina-based parry, damage upgrades when finessing – and I haven’t even come close to mentioning even half of the options available – so yes, fighters now have a serious array of different distinguishing abilities beyond feats.

This much required differentiation also extends to advanced armor training, with 7th level, 11th and 19th level providing one such choice from a seriously impressive, if briefer, list that includes a wide variety of defensive options, including DR, better CMD, being capable of protecting nearby allies, full sprinting in armor, quicker armor donning and even piecemeal armor training…oh, and scaling SR. Yes, the badass fighter is now no longer the sucker that jealously looks at the barbarian for things he ought to do to those spell-slingers. So yes, massive, massive customization options.

Now here is the thing: Even if the weapon training and armor training offer a metric TON of options, there is more to be found – namely fighter training options that you can choose to substitute either. Yes, I am not even kidding, the unchained fighter has a metric ton of even more options – with negative condition suppression powered by stamina, ranger traps, item mastery feats, improving the options for the aforementioned wild card option (which is btw. called martial spontaneity), mounts, etc. – and yes, some build upon one another. This is a gigantic array of unique tricks and, as we’ve come to expect from Alexander Augunas, he has skillfully woven the stamina-mechanic into the powerful options. The pdf also lists the respective weapon groups, advanced weapon groups – and better yet, uncommon weaponry from ultimate equipment has similarly been added, including a massive amount of tables listing all those aspects as and rules-relevant stats…so amazing. Have I btw. mentioned the finesse weapon group and the options it allows for in conjunction with the new options?

But this is not even close to reaching the density of crunch this offers: The book has a massive, colossal amount of archetypes modifies for the use with the unchained fighter: Airborne Ambusher, Archer, Armor Master, Brawler, Cad, Cavern Sniper, Crossbowman, Dirty Fighter, Dragoon, Foehammer, Free Hand Fighter, Gladiator, Mobile Fighter, Phalanx Soldier, Polearm Master, Roughrider, Savage Warrior, Sensate, Shielded Fighter, Tactician, Thunderstriker, Tower Shield Specialist, Two-Handed Fighter, Two-Weapon Warrior, Unarmed Fighter, Unbreakable, Weapon Master. I can’t cover all of these in the detail I’d usually provide without bloating the reviews beyond belief- just let me say that the further tweaks of this massive array of additional options provide is amazing. They take all the customization options we expect and smoothly streamline them to fit the new chassis.

Oh, and obviously, for the fighter as the formerly-feat-centric class, this pdf also features a significant collection of different feats: We can find a feat for stamina-based save rerolls; we can find an option that allows for the ignoring of temporary physical ability score damages; quicker natural healing…and then there is the exceedingly cool fact that, yes, the feats come with combat tricks beyond the already neat benefits!!! So yes, the leitmotif here is MAXIMUM FLEXIBILITY.

Editing and formatting are top-notch on both a formal and rules-language level. Layout adheres to a 2-column full-color standard with numerous Jacob Blackmon-artworks throughout – and yes, copious kitsune and nagaji included. The pdf comes fully bookmarked with nested bookmarks for your convenience.

Alexander Augunas delivers the class the fighter always was supposed to be: We retain the massive depth of combat tricks, but instead of making one-trick pony specialists that play alike in every single round, the unchained fighter not only has a colossal amount of customization options – the talented fighter had that as well. The accomplishment of the class lies definitely in the flexibility that is not restrained to the building path chosen, but to the options it allows the player to take within said paths: Even if you compare two fighters employing the same weaponry and roughly similar fighting styles, you will have differentiations between them, completely different experiences. The in-depth integration of the stamina-system further provides fun to the act of playing a fighter and adds a component of resource-management to the experience. In short: The unchained fighter provides a ton of player and character agenda – the increased skills per level and other abilities available mean that the fighter no longer has to impotently twiddle his thumbs while the barbs and rangers get to do all the non-combat fun stuff.

This rebuild of the fighter is the best I have seen so far and most certainly should be a required addition to any game that has players who want to play one; mechanically precise, fun and well-designed, chock-full of unique and fun options, this pdf is worth every cent of its asking price twice and deserves a final verdict of 5 stars + seal of approval and also receives a nomination as a candidate for my Top Ten of 2016. Very much required and from this point onward the point of reference that other fighter fixes will have to beat in order to have any raison d’être.

You can get this amazing revision of the fighter here on OBS!