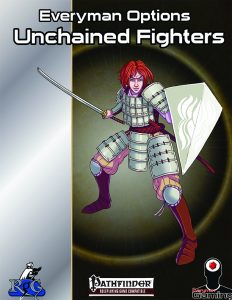 This expansion for the superb unchained fighter class clocks in at 26 pages, 1 page front cover, 1 page editorial, 1 page ToC/introduction, 3 pages of SRD, 2 pages of advertisement, leaving us with 18 pages of content, so let’s take a look!

It was pretty evident that the chassis of the unchained fighter as presented in that amazing book, would have enough slots to further diversify it beyond its already impressive scope – after all, it has basically 3 categories of talent-like ability-arrays you can expand. Thus, we begin with no less than 7 new advanced armor training options in this book. We have less penalties for fighting defensively, better Sleight of Hand to conceal items and higher weight capacity, we get cover training that increases the bonuses cover grants. There is also a way to use Bluff as a substitute to AC or CMD – if the attacker beats the result, the fighter can choose to be hit anyways to gain a bonus on his next attack roll or skill check – considering how highly you can stack Bluff, I am not comfortable with this. The rules-language could also more explicitly state that failure to penetrate the skill’s result negates the attack – while obvious from context, the precise wording could be more explicit here. There is also an option to use Acrobatics and an immediate action to negate critical hits, but only when unarmored, which is pretty neat. Oh, have I mentioned decreased physical attribute damage? With the Bluffing-one as an exception, a damn cool assortment of new tricks.

More than 10 new options for advanced weapon training have similarly been included in this pdf – these include interaction with Ultimate Charisma, allowing for baleful glares that allow for at-range psychological maneuvers, which is really, really nice. Adding minor bludgeoning damage to some maneuvers is nice, but pales in the options that e.g. the simultaneous maintenance of multiple styles at once can provide; this chain of abilities alone can generate some seriously cool fighting game style tricks. (Remember when Mortal Kombat had style-switch options?). There would also be a catch-all combo of Power Attack and Deadly Aim, not stacking with those as well as the one-hand wield two-handed weapon trick – so yeah, if you wanted to go all guts and one-hand-wield a really big, nasty weapon…possible. Gaining the nothing can stop me vigilante talent also is a neat idea.

Beyond these, the pdf also provides new types of fighter training options…and they are really, really interesting. Take e.g. one that emulates attributes, scaling with class levels, but only for the purpose of the wild-card martial spontaneity ability. Further vigilante crossover for some nice social talent (yes, Face-fighters. Mind-boggling, right?), kip-ups, gaining a climb or swim speed (requiring sufficient Climb/Swim ranks as prerequisites to avoid cheesing)…oh, and if you’re like me and enjoy pushing your PCs through grueling wilderness treks, you’ll certainly appreciate the marching drill, that allows the fighter to extend bonuses granted to allies. Modifying a select array of proficient weapons to be treated as belonging to a weapon group and the substitution of Knowledge (engineering) for Disable Device make for some sensible, intriguing tricks.

You’ll notice the obvious change in focus: Whereas the core pdf dealt with the traditional, very fighter-y archetypes, this time around, we get the applications of the multiclass-scavenging options – want mutagens with your unchained fighter? A more rogue-y one? A draconic bloodline (including primal dragons and similar less common options)? Those options and more can be found here. Now it should be noted that these do not represent radical departures from the original fighter options – if you take a look at, for example, the viking, you won’t find a full-blown redesign or application of Ultimate Charisma’s rules here – but since this is a damned if you do, damned if you don’t situation, I won’t hold that against the pdf. The focus/stance taken still is nice to know from a consumer perspective, though – hence this little discussion. The new archetypes are the combat infiltrator, who can best be pictured as a Rambo-like commando with some armored sneaking capacities and the Mystic Warrior, who learns to fire elemental bolts at adversaries. And no, it does not use kineticist tricks. It’s okay, but personally, I’m not a fan of ammunition-less, unlimited shots, so this hits a pet-peeve of mine.

The pdf also contains 6 new feats, which may not look like much until you take a close look at them. First of all, the pdf features Weapon Mastery feats, which require the weapon training class feature and only bestow their benefits in conjunction with a chosen, appropriate weapon – but these would not be the only feats here. Lightning Draw allows you to fluidly stowing and drawing weapons, allowing for whole new combo-style assaults and building further on Quick Draw and Quick Stow.

And yes, the feats here do come with combat tricks that require stamina expenditure. There would be an option for increased damage output for ranged weapons that is balanced by an important caveat to prevent the further escalation of ranged weaponry; there is an option to Parkour charge. Better yet: Depending on the material of your shield, you can grant yourself scaling energy resistance, which is AMAZING, as it makes sense internally AND provides some much needed love for shields. Know that scene from x movies, where a throwing specialist puts his all in a single throw, increasing the damage it inflicts? That can now be executed. I was also duly impressed by Volley Attack, which looks insanely powerful at first, covering 10 ft. per BAB-point…but then you realize that the feat eliminates the bonuses bestowed by other feats, abilities and spells and arrive at a painful hail, that still is very much feasible, balanced. That and the prerequisites mean that not every Jim and Joe will be able to pull off such a devastating hail.

Editing and formatting are very good, I noticed no significant issues in rules-language or formal criteria. Layout adheres to Everyman gaming’s two-column full-color standard and the pdf comes bookmarked for your convenience, but not to individual feats/abilities. The artwork by Jacob Blackmon is full color and neat.

Alexander Augunas’ expansion for the glorious unchained fighter is an interesting pdf for me – I absolutely adore several of the class options and the feat-chapter similarly is inspired. At the same time, as a person, I was slightly less enthused (much like in the original unchained fighter) by the archetype adaptations – they do their job well, don’t get me wrong…but they are adaptations. Personally, I prefer the more pronounced changes, the massive redesigns.

But, let’s make that abundantly clear, that is simply my own personal preference. The new training options for the most part and all of the feats are absolutely inspired and may warrant getting this, even if you’re like me and not too blown away by the archetype array. Hence, my final verdict will clock in at 5 stars -a very good expansion for the phenomenal fighter rebuild.

You can get this great expansion for the unchained fighter here on OBS!