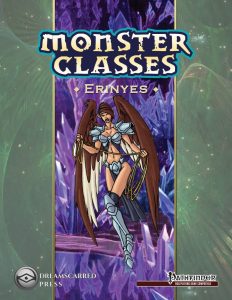 The second installment of Dreamscarred Press’ Monster Classes-series clocks in at 9 pages, 1 page front cover, 1 page editorial, 1 page SRD, leaving us with 6 pages of content, so let’s take a look!

So, what is this? In one sentence: It’s Dreamscarred Press providing the Savage Species type of “Play monsters”-rules for the context of the Pathfinder roleplaying game. The pdf does acknowledge that this series (or even, individual installments) may not be for everyone – the fact is that most modules are humanocentric and thus, playing monsters can wreck havoc with the assumptions of a given game…more so than players are liable to anyways.

Let’s not kid ourselves here – the guidelines presented in the bestiaries aren’t really doing a good job; CR = levels doesn’t work out too well – the concept needs a finer balancing. The series acknowledges exactly this requirement. The solution here would be to employ basically racial paragon/monster classes; instead of progressing in a class, the respective critters advance to grow into the full power array. Another issue that playing monsters entails would lie within the arsenal of SPs at their beck and call – an issue that the series handles via an optional, but recommended replacement of spells instead of SPs – for the erinyes, this would be bard-like, Cha-based spontaneous spellcasting drawn from the cleric list, with minor image added at 2nd level, fear at 3rd and greater teleport at 6th level.

Base race trait-wise, the erinyes receives +2 Dex and Int, is a medium lawful and evil outsider, gains darkvision 60 ft., fire resistance 10 and immunity to poison.

The racial class covers 9 levels and sports d10 HD, full BAB-progression, good Ref- and Will-saves and the class begins play with simple and martial weapon proficiencies and +2 natural armor, which increases by a further +2 at 5th and 9th level. They also begin play with SR 10 + HD, which is somewhat strong. At 2nd level, they can see perfectly in darkness.

2nd level provides gliding wings that upgrade to 50 ft. flight at 6th level (good maneuverability) and 4th level provides acid and cold resistance 5 and upgrades fire resistance to 20. The former increase to 10 at 8th level. 5th level nets DR 5/good and provides telepathy (range increases later). At 6th levels, these furies may use a 50 ft. rope to entangle foes as though affected by animate rope (spell not italicized) and may hurl the rope 30 ft; the DC here is Dex-based, just fyi. 8th level provides fire immunity.

The pdf provides 4 feats: Flyby Attack and the secondary wing attack-trick as well as Redeemed Soul, which helps good characters with the evil subtype (nice!) and a feat that unlocks 1/week commune with the dark masters as an SP.

Attribute-bonus-wise, the erinyes gains +4 Str, +8 Dex, +6 Con, + 2 Int +8 Wis,+10 Cha for a total of 38 attribute points, not accounting for those gained by the base race. This is, much like in the astral deva installment, too much for my tastes – the +5 spellcasting/SP-DC alone is NASTY. That being said, it’s not as bad as in the deva’s case, though it’ll probably cause some issues in less high-powered games.On a plus-side, I spotted no hiccups this time around among the abilities and the general dispersal of when what is gained can once again be considered to be well-crafted. The pdf does come with a glossary of rules for types etc. that is handy to have.

Editing and formatting are very good – apart from the missing italicization of one spell, I noticed no botches. Layout adheres to Dreamscarred press’ two-column full-color standard and the pdf sports an okay artwork. The pdf comes with a second, more printer-friendly version and has no bookmarks, but needs none at this length.

Jeffrey Swank’s erinyes is less OP than the astral deva…so that’s something. It still won’t get anywhere close to my games, considering that it gains more attribute points than most groups use as a base point buy for a class that has 6+ skills, good HD, full BAB-progression, etc. Yes, I am aware how outsiders work. Yes, I know what the goal here is – and frankly, at least I can see the erinyes being of some use for some games; it does gain more attribute points per level on average, but it has less levels to escalate. I still would advise extreme caution when using this one and won’t ever allow it near my minmaxing players…but I can get why someone would like this. While nowhere near balanced in my book, I will hence settle on a final verdict of 2.5 stars, rounded up to 3 for the purpose of this platform….unless you’re planning on running a really high-powered game, in which case, this will probably be right up your alley.

You can get the subscription for the series here on OBS!

You can directly support Dreamscarred Press on patreon here!