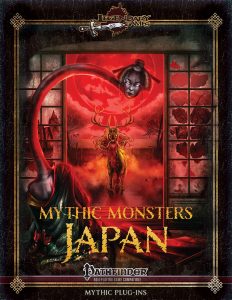 Now, as always, we begin this supplement with new supplemental content – and this time around, that content comes in the guide of 5 new magic items, the first of which would be the mighty crane kimono, which nets the wearer Crane Style while unencumbered and in light armor and also bestows good fortune, which particularly shows when rolling an advantage-like roll, i.e. twice and taking the better result. Really cool: The kimono also protects from the ravages of time, rendering mythic wearers even immortal! Cool: We can use mythic power to render spells merciful or apply Touch of Serenity to attacks. I can see the kimono’s cranes being released. Evocative one. The second item would be a representation of the classic oni mask, here envisioned as allowing wearers to grow in size and gain oni-like defensive traits, which may be further enhanced via mythic power expenditure. Additionally, the mask can be thrown into the air to grow, pummeling a designated foe as forceful hand, representing a classic visual. Wearers can also fire rays and mythic wearers get passive bonuses. Cool take on the trope!

Less costly would be the princess peony, which can create a spectral bodyguard of sorts. The rokurokubi whip can have its tail transform into the head of the dreaded creature, which can also transmit caster croak! Mythic wearers can also wield it as a scarf, granting sustenance, the option to become a pseudo-rokurokubi etc. – amazing weapon! The tombo fan, finally, enhances bardic performance while acting as a magical fighting fan, while mythic wielders can begin to fly while maintaining performances with the fan. Nice one!

Now, what about the monsters? Well, at Cr 3/MR 1, we have the Pipefox, whose mythic incarnation is a true font of knowledge and who may, 1/day stun targets with a revelation. Fun one.! At the same CR/MR, kappa can thankfully now turtle up in their significantly stronger shells. I was also happy to see the water gourd represented in a proper ability here. Well done. At 1 CR higher, the Kawa Akago can break of their fangs in targets now, and they also get a luring, mournful cry – which is delightfully twisted.

From here, we move to the classic tanuki, here as CR 5/MR 2. The Tanuki gets its choice of a limited array of feats each round, to represent drunken master-style unpredictability, and yes, the classic flame breath as well as pilfering hand 3/day while in raccoon form. The Kirin’s mythic version clocks in at CR 8/MR 3 and is unfettered by boundaries – freedom of movement. They can use mythic power for quickened cure spells and get smite evil. They can also add a mythic power-based detonation to their new signature ability, which is a corona of purifying flames that harm neutral and evil creatures. (Kudos: Half fire/half untyped properly codified.)

At CR 10/MR 4, we have two creatures, the first of which would be the ogre mage, who gains a disease to afflict targets with as well as more natural weaponry to represent the maneater aspect. Oh, and they may use mythic power to increase spell DCs and enter a specialized rage. The second creature herein at this power-level would be the ice-maiden, the Yuki-onna can now bull rush in spite of being incorporeal and gets the trick to send magic flying back to casters. Nice! While we’re on the subject of deathly pale beauties: The Harionago clocks in at CR 13/MR 5 and does finally justice to the myth: DR-penetrating barbs in the hair, a nasty shriek (did I hear banshee?)…really cool. My favorite ability, though, would be a representation of her not handling rejection well: When someone resists her tricks, she takes Wisdom damage, but also gains a buff. This rewards smart players and has the plot-angle practically baked in. Kudos! Japanese legends sport some of my favorite woman-monsters, and the spider-hybrid Jorogumo, at CR 15/MR 6 is also included, and of boy is she cool: Webs laced with intoxicants and aphrodisiacs; enhancing spiders with breath weapons, implanting eggs, quick wrapping of targets – pure amazing!

At 1 CR more, the mythic Gashadokuro can fire skulls that latch onto victims and gnaw them to bits; they are nigh-unstoppable when faced by those suffering from starvation and they get a demoralizing roar and enhance the starvation aura to apply feast of ashes via successful attacks. At CR 21/MR 8, we have the Bakekujira, who can unleash mythic contagion, can Awesome Blow via tail slaps and gets fast healing 10 – but only in water…or, well. It can get half fast healing for a limited time for mythic power. Mythic power may also be used to attempt to affect creatures that saved via levathan’s call. They have bane versus ANY creature that killed an aquatic animal and those killed by their smashing breach rise as savage draugr! Have I mentioned the undead parasites? Oh yes. At the same lofty CR/MR, we get the mythic shinigami. These can crush soul gems quicker and gain cumulative bonuses when focusing on a target – death, alas, is inevitable, as they say. Similarly, escaping from one may see the mortal cursed with an escalating, devastating curse and their presence makes death effects bypass SR automatically. OUCH. And yes, their scythe can’t be disarmed…oh, and you DON’T want to be critted by them. If the damage doesn’t kill them, DC 37 save or die should make even mythic characters gulp for a second when facing these legends.

What’s the new creature, you asked? Well, none other than perhaps the most famous, legendary beast from Japanese myth. We’ve fought it in Nioh, in okami, we’ve read about it in Catherynne M. Valente’s Grass-Cutting Sword – represented in a ton of different media, we get the epic, eight-headed Yamata-No-Orochi, at CR 30/MR 10. Full attacks with charges. Beheading bites. 8 different breath weapons. Oh, it can INFLICT BURN. It has independent minds and control of which one is affected. It can intercept attacks by foregoing attacks or breath weapons. Oh, and it can, obviously, regenerate heads. Its jumps generate tsunamis/earthquakes…and it is a relentless sake-addict. Which may well be the only reliable way to survive seeing this glorious legend. Seriously, do the DPR-calculations for a smartly-played Yamato-No-Orochi. No matter how amazing the mythic high-level PCs are, they will fear this beast!

Editing and formatting are very good on both a formal and rules-language level, I noticed no serious issues. Layout adheres to Legendary Games’ two-column full-color standard and the pdf comes fully bookmarked for your convenience. The artists Tim Kings-Lynne, Mike Lowe and Tanyaporn Sangsnit did a glorious job with the artworks – the cover artwork in particular is PHENOMENAL. As in, one of my all-time favorite cover-artworks.

Jason Nelson, Loren Sieg and Mike Welham provide a homerun here – every single iteration of these mythic upgrades is suffused in mythology, sports amazing abilities, and blows its regular version out of the water – not only in power, but in how they try to represent the associated concepts. This is one of the best installments in the whole series, at least for me. It oozes flair and panache in every critter and the depiction of the legendary 8-headed snake as a new campaign-endboss-level super-beast adds icing on a cake made of awesome. 5 stars +seal of approval, given sans hesitation.

(As an aside, if you’re playing in Kaidan and are looking for some really tough bosses…there you go!)