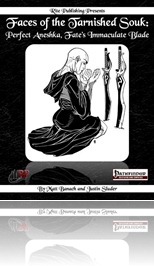 The latest installment of the FoTS-series form Rite Publishing is 15 pages long, 1 page front cover, 1 page editorial, 1 page SRD and 1 page advertisement, leaving a total of 11 pages for the latest addition to Rite’s roster of far-out NPCs, so let’s take a look at her!

Following my standard for reviews of the FoTS-series, I’ll start with the supplemental material:

There are archetypes in here, and a lot of them. Special mention deserves the weapon champion generic archetype, one, that akin to those innovated by SGG in what seems to be a long time ago, can potentially be taken by every class: This archetype enables one to specialize in a very close set of weapons and receive rather versatile bonuses when using them, from additional damage to shield bonuses, improved CMBs etc. The physical exemplar is another such generic archetype and portrays a character that tries to hone his/her/its physical form towards perfection, resulting in improved attributes etc. To properly realize which abilities Aneshka has given up in her classes, the ki master and woodland spellcaster archetypes (which are part of the regular classes ability roster) are also defined. Beyond that, we get the urban ranger archetype as well as the serene savage (barbarian) archetype. Due to Aneshka being a half-giant, her racial traits (originally appeared in Psionics Unleashed) are also reprinted. Now, before all the psionics-haters start screaming, you should know that half-giants only get one psionic ability and that is to cause a shockwave with a stomp and said ability is reproduced as well. And come on – that is not particularly psionic now, is it?

Aneshka also comes with 6 feats and a particular specialty: The synergy with SGG continues to my enjoyment and this illustrious member of the FoTS-series is lethal even for the Coliseum – especially due to utilizing two feats from SGG’s guide to horrifically overpowered feats: “Gestalt”, which grants her the abilities of a monk with the physical exemplar archetype and a barbarian with the serene savage archetype and “Prestigious”, which grants her access to the special powers associated with the assassin PrC. Both feats are reprinted here and their benefits are explained in detail. 2 new traits associated with the dreamburning mechanics of Coliseum Morpheuon are part of the deal, as are 6 items, one of which is actually a major artefact. Have I mentioned her 25-point buy or her PC-level wealth? All that is factored into her Cr and explained, should you wish to create similar characters. Even her lowest incarnation can be considered deadly at CR 8, but the true terror is her CR 22 incarnation – we’re talking about up to 9 attacks, the worst of which is at +17!

But what about her as a character? Aneshka has once won the Coliseum – she has drunk from the cup of desires and her prowess is partially a result of this – however, still, she has lost all she ever held dear, her family dead and gone. Seeing this as a twist of fate and punishment for her scrupulous past, the giantess has turned towards a cold fatalism and a belief in the strands of fate and change – at the same time a devoted observer of other’s destiny and a harbinger of doom for others. She comes with dreamburning information as well as some rather devious hooks, one in particular awesome if you as a DM manage to stage her continuous reliance and driven nature and belief in the whispers of fate early on and escalate it – but I won’t spoil that one here.

Editing and formatting are top-notch, I didn’t notice any glitches. Layout adheres to RiP’s old two-column b/w-standard and the artwork portraying her is nice.

The pdf comes fully bookmarked. When I heard that this installment would use SGG’s HO-feats, I gibbered a bit – FoTS-NPCs are formidable, cool foes and Aneshka even more so due to them. The amount of options her highly volatile build has are staggering and her combat prowess is frightening indeed, I love it! Her character feels multi-facetted and the additional content – well the additional content and specifically, its implementation, is what makes this interesting: The combination of high point-buys, HO-feats, generic and specific archetypes and all the abilities coming together in one deadly, glorious being of raw destructive power: This NPC and its statblock is a beauty to behold. As a character, Aneshka is also interesting and a multi-facetted being, though there are FoTS-installments I personally prefer – Smiles, Nix-Ra-Bael etc. But from a mechanical point of view and regarding her build, she might yet be the most complex (!!!) character in an array of NPCs that is famous for its elaborate builds. Seeing that I can’t find a fault with the pdf and love her build, I am practically forced to rate this the full 5 stars + seal of approval,

Faces of the Tarnished Souk: Perfect Aneshka, Fate’s Immaculate Blade is available from: