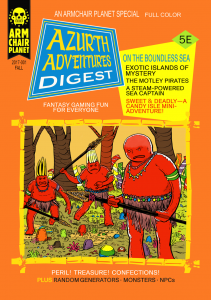 The first (and so far, alas, only) installment of this ‘zine depicting the lands of Azurth, a hilarious take on fantasy as seen through the lens of old-time Loony Toons/Tex Avery clocks in at 36 pages, 1 page front cover, 1 page editorial, 1 page of SRD, 3 pages of advertisement, leaving us with 30 pages, laid out in 6’’ by 9’’ (A5), so let’s take a look!

We begin this ‘zine with an introduction by the commodore Cogburn Steamalong, a navy captain who also happens to be a steam construct, and who proceeds to present comments on the material provided within. This character is also fully statted with a proper statblock; that being said, the HDs are missing from the write-up, and the Perception values are incorrect. This, unfortunately, is bound to be symptomatic for the remainder of the ‘zine.

But I’m getting ahead of myself: The pdf begins play with 4 different islands, the Motley Isles, and the brief gazetteer is actually really nice and playful, and the whole section is supplemented by a new creature, the dread Frogacuda! This statblock is mechanically the best thing in the ‘zine – it’s a solid write-up and gets all the math right. It also fits in well with a region that has a settlement governed essentially by ritualistically consulting a magic eightball. In these instances, the supplement feels very much like someone had made a Monkey Island/D&D-crossover. A fluff-only pirate generator is also included – 24 names, 24 occupations, 12 notable traits and 12 trinkets act as a solid little supplement. A pirate captain generator with 12 names, 12 ship-names, 12 instances of stuff the captain is known for and 12 pieces of exotic beauty makes for the second generator.

The pdf also includes notes on the homelands of frogfolk (here called “frox”), the chain of fools (An archipelago where you don’t want to tread), a massive mechanical fish. Weird indigenous bird-people “amazons” (well, kind of…) in service to a male priest caste may be found, and the pdf contains 10 smaller entries as well – it should be noted that both Motley Isles and the Candy Isle, which acts as a module of sorts, come with nice full-color artworks. There are no keyless, player-friendly versions included.

The following discussion of the Candy Isle does contain a few minor SPOILERS. Potential players may want to jump ahead to the conclusion.

All right, only GMs around? So, the Confection Perfection is basically a divine pastry, and it acts as a linchpin for the angle to explore the location – the Candy Isle! This region, including all of its inhabitants, is made of sweets. The indigenous gummy people (shown on the cover) are an interesting angle, and we do get top-down AND side-view map versions of their temple – once more without a player-friendly version. The mini-module does not have read-aloud text, but does note random encounters. The general presentation is nice, though the set-up would have benefited from a bit more space. And yes, they do want to sacrifice the PCs on their chocolate-y altar.

That being said, the module also exemplifies well a misconception that is common for designers coming from old-school games to 5e, namely that an abbreviated statblock suffices.  They do not, and I don’t get why this booklet doesn’t provide properly presented and laid out crunch when it has proven that it well can. To give you an example, you can read the following: “Melee brittle candy

spear (+3, 1d6+1/1d8+1 piercing), Ranged (+3 1d6+1); S +1, D +0, C +1, I -1, W +0, Ch -1;“ You don’t have to be a rocket scientist to notice that the ability scores are missing, and that statblock formatting is not even close to acceptable. There also are errors in these shortened statblocks, and this puzzling inconsistency annoyingly also applies to two sample NPCs, who also get the formatting of features wrong – when the very same booklet offers two instances where they’re correct. I don’t get it. At all. And yes, these NPCs also have more relevant errors in their stats.

Editing is very good on a formal level; on a rules-language level, there are a lot of glitches herein – much more than in Mortzengersturm. Formatting, as noted, often needlessly diverges from established 5e-standards. Layout adheres to a nice two-column standard that is mostly b/w, but uses full-color for boxes, maps, etc. – this is a surprisingly nice-looking book, courtesy of Jeff Call’s neat artwork. The cartography by Jeff Call and Jason Sholtis is also nice and full-color, though the lack of player-friendly versions is a bummer. I do not own the print version, so I can’t comment on it. The pdf lacks any type of bookmark, making navigation an unnecessary hassle.

Trey Causey can do better. This digest, alas, while amazing and funny regarding its ideas and creativity, is mired with an unfortunate amount of errors in the rules, non-standard rules-syntax and things that Mortzengersturm did better. I want to like Azurth as a setting, and I genuinely do and want to see more, but this digest, alas, remains a flawed supplement. Add to that the lack of bookmarks, and we have a bit of an issue on our hands. And I really wish this wasn’t the case.

The supplement perfectly shows that it *can* get 5e right, only to then shrug and fiddle those inconsistent half statblocks together, to botch math etc. Much like the candy theme, this started with a smile, and then proceeded to develop into a moderate tummy-ache for me. That being said, this is still an inexpensive supplement with great ideas – I just wished their implementation had been better. My final verdict, alas, can’t exceed 3 stars.

You can get this supplement as a pdf here on OBS.

You can get the print version here on Exalted Funeral’s shop.